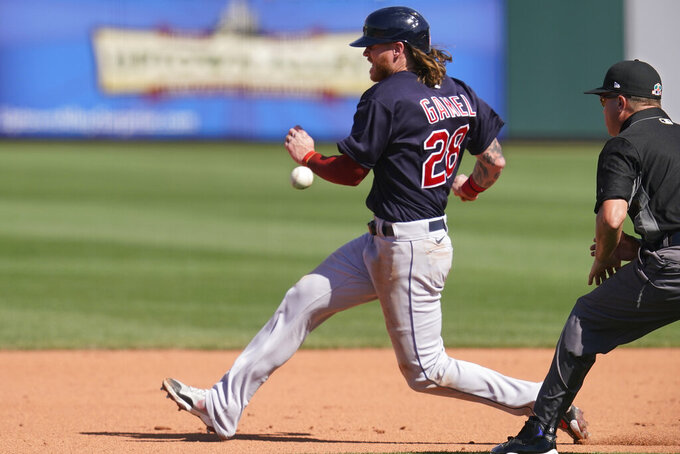 Cleveland Indians' Ben Gamel races the ball thrown by catcher Drew Butera to shortstop Isiah Kiner-Falefa at second base, on an attempted steal during the fifth inning of a spring training baseball game Tuesday, March 9, 2021, in Surprise, Ariz. Gamel was out on the play. (AP Photo/Sue Ogrocki)

Michael Kopech is getting used to his new relief role with the Chicago White Sox.

Judging by his first Cactus League appearance, it looks like he's going to be just fine.

The talented right-hander worked a perfect fourth inning Tuesday against San Diego. It was his first game since he opted out of the pandemic-shortened season for a variety of reasons, including concerns about his mental health.

“It’s been a while, obviously,” Kopech said. “But it just felt good to kind of knock some rust off and get back out there and compete.”

The 24-year-old Kopech, one of baseball’s top pitching prospects, was a starter coming up through the minors and likely will return to Chicago’s rotation at some point. But he is expected to begin the year in the White Sox bullpen.

Part of his spring training work involves getting up to speed when it comes to life as a reliever. He worked out of the stretch against the Padres.

“If I am going to be throwing out of the bullpen for part of this year at least and maybe throughout the season, then I need to be a guy that’s ready to compete with runners in scoring position,” he said.

In Kopech and left-hander Garrett Crochet, the White Sox have a couple 100-mph arms in front of closer Liam Hendriks. Crochet came in after Kopech and also worked a scoreless inning against the Padres.

“Not too long ago there weren’t that many guys that threw 100 miles per hour in baseball, and we got a handful of them in our bullpen,” Kopech said. “It’s just crazy to think about, but it’s a lot of fun, the expectations that we have for ourselves.”

New York Yankees left-hander Zack Britton needs surgery to remove a bone chip from his pitching elbow and seems certain to miss the start of the season. The reliever will return to New York on Wednesday.

“As far as timetables and stuff like that, we’ll have more in the coming day or two days,” manager Aaron Boone said.

Boone said Britton’s ulnar collateral ligament was not suspected of being hurt, an injury that if diagnosed could lead to Tommy John surgery. Boone said Britton felt soreness Sunday night following a bullpen session and had an MRI of his elbow on Monday.

Britton, 33, disclosed last weekend that he was recovering from COVID-19, which he contracted in January. He has not pitched in any exhibitions.

“I think set him back a little bit in his buildup,” Boone said. “Just trying to kind of get his weight up. He’s actually been throwing pretty well early in spring.”

Britton, a two-time All-Star, was 1-2 with a 1.89 ERA and eight saves in 20 appearances during the pandemic-shortened 2020 season. He filled in as closer when Aroldis Chapman was recovering from COVID-19.

NO RELIEF FOR RANGER

Texas will be without one of their top relievers to start the season after hard-throwing Jonathan Hernandez was shut down from pitching for at least four weeks because of a ligament sprain in his right elbow.

The 24-year-old Hernandez had a breakout season last year, when he was 5-1 with a 2.90 ERA in 27 appearances. He had 31 strikeouts and eight walks in 31 innings, relying heavily on a sinker that averaged nearly 98 mph.

“The good news on him is that this (injury) is one that normally recovers and responds well with some rest,” Rangers general manager Chris Young said from the team’s spring training camp in Surprise, Arizona.

“Jonathan is obviously one we were counting on,” said Young, who expects the reliever to be out at least a couple of months. “This one hurts a little bit. But there’s still a chance he pitches this year.”

Braves left-hander Max Fried will start in his first game of the spring on Wednesday against Boston after being held back due to COVID-19 tracing.

Fried, expected to occupy one of the top spots in Atlanta’s rotation, had his first scheduled start of spring pushed back on Thursday because of potential exposure to someone with COVID-19. He never tested positive and threw a side session on Tuesday in preparation for his start against the Red Sox.

The delay is not expected to affect Fried’s availability for the start of the regular season. Snitker said the decision to hold Fried back was a safety measure.

Fried won 17 games in 2019 and was 7-0 with a 2-25 ERA last season, when he led the staff after Mike Soroka’s season-ending Achilles injury. Fried finished fifth in the NL Cy Young Award balloting.

Starter Steven Brault and the Pittsburgh staff came within one out of pitching a no-hitter. Phillip Ervin broke up the bid with a two-out single off Nick Mears in the ninth inning.

Ke’Bryan Hayes went 2 for 2, including his fourth double. He's gotten an extra-base hit in all five of his games. Adam Frazier went 3 for 3 and Jacob Stallings hit a two-run double.

Daniel Johnson helped his chances in a crowded Cleveland outfield competition by homering twice and Bobby Bradley had three RBIs.

The 25-year-old Johnson, who came to the Indians in a 2018 trade from Washington, spent most of last season at the team’s alternate training site. Bradley continued his impressive spring as he tries to win the starting job.

Taijuan Walker made his first start for New York, striking out Matt Carpenter and Nolan Gorman in a perfect first inning before giving up an RBI single to Andrew Knizner and a sacrifice fly to Edmundo Sosa in the second.

Aced out of his preferred No. 00 by the Mr. Met mascot, Walker became the first Mets player to wear No. 99 since Turk Wendell from 1997-2001. Walker also got a gift from his predecessor — a shark tooth necklace like the one the quirky Wendell wore on the mound.

“I learned a lot quick, though, from the fans. They sped me up on him,” Walker said. “It was cool that he sent me the care package. My next start I’m going to try to wear that tooth shark necklace for him and for the fans. I know they want me to do that bad.”

Closer Edwin Diaz followed Walker, striking out two in a scoreless inning in his second outing.

Carlos Martinez threw three scoreless innings in his second start for St. Louis, allowing two hits and two walks while striking out three. Carpenter is 0 for 13 this spring in his competition with Tommy Edman for the starting job at second base.

Minnesota ace Kenta Maeda allowed one hit in three innings, striking out four in his second start. He has fanned seven in five scoreless innings this spring, allowing two hits and no walks. Miguel Sanó drove in the game’s only run with a double.

Baltimore's Dean Kremer fared better in his second start, allowing a hit and a walk in three scoreless innings. He surrendered three runs, retiring five batters in his first outing. Cedric Mullins doubled for one of the Orioles’ three hits.

Willi Castro his third home run for Detroit. Left fielder Clint Frazier baned into the wall chasing the ball, but was OK.

Nick Pivetta made his second start for Boston, allowing a run on three hits with three strikeouts in three innings. Top Red Sox prospect Jeter Downs singled in his only at-bat, raising his average to .429.

Steven Matz, in his first season with Toronto after pitching six seasons for the Mets, allowed one hit in three shutout innings, striking out three. He has yet to issue a walk in two starts, striking out six in five scoreless innings. Marcus Semien doubled and scored on a sacrifice fly by Vladimir Guerrero Jr.

Philadelphia starter Vince Velasquez allowed one earned run on a hit and two walks, striking out three in 1 2/3 innings. Alec Bohm’s single was the Phillies’ lone hit through seven innings.

Joc Pederson hit his third home run for Chicago and Rafael Ortega had a grand slam. Cubs reliever Craig Kimbrel worked an inning and gave up a home run to Matt Chapman.

Oakland starter Cole Irvin struck out four over his three-inning start, allowing a run on two hits and a walk. Pete Kozma drove in two runs with a double and Matt Olson followed with an RBI double.

Lance Lynn started and worked into the third inning, leaving with two outs after striking out five and walking four.

Duffy worked three innings in the start and was tagged for five runs on six hits and a walk. Ervin Santana worked two innings in relief, giving up one hit. Jorge Soler hit a two-run homer.

Avisail Garcia, who dropped 30 pounds over the offseason and is hitting .500 this spring, and Christian Yellich homered back-to-back for Milwaukee.

Alex Wood worked two innings in the start for San Francisco and gave up a home run to Omar Narvaez. Steven Duggar and Heliot Ramos homered for the Giants.