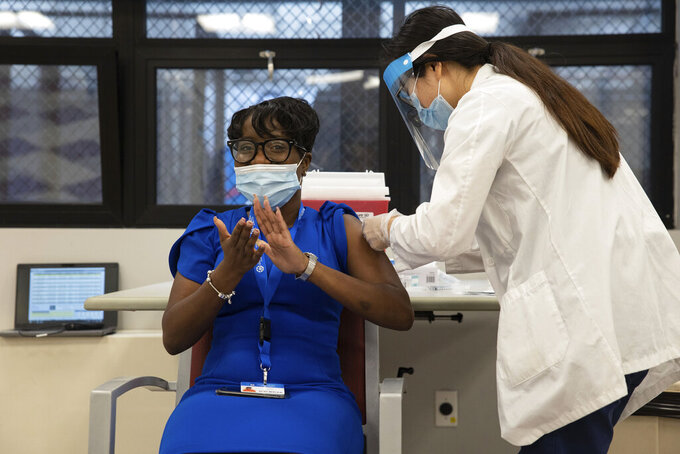 FILE - In this Friday, Jan. 15, 2021 file photo, a nursing home staff member receives a COVID-19 vaccine by a CVS pharmacist at Harlem Center for Nursing and Rehabilitation, a nursing home facility in the Harlem neighborhood of New York. Nursing homes in parts of New York hit worst by this winter's COVID-19 surge say they're struggling to find enough staff as workers have gotten sick or needed to quarantine. (AP Photo/Yuki Iwamura, File)

About 80 nursing homes have reported nursing shortages as of early January, according to The Associated Press’ analysis of the latest federal and state data. Most are located in parts of western and central New York that saw their first serious outbreaks of the virus begin in late autumn.

At The Pearl nursing home in Rochester, a core group of nurses worked double shifts for weeks between Thanksgiving and Christmas, said administrator Christine Schaller.

“I have people who didn’t take any days off," she said. “That’s how we survived."

The 120-bed nursing home didn’t see its first COVID-19 case until October. Since then, 14 residents have been killed by the disease. At least 40 staff members there have become ill, according to federal data.

“It’s been, for a few people, so frightening that they just were unable to work, they were so frightened,” she said. “I’ve have some staff members who are going to have long term physical health problems from COVID. They’ve recovered from the disease and still have respiratory issues that are probably going to be lifelong.”

“It’s really difficult. They are pulling out all their stops doing everything they can to ensure adequate staff in facilities," Hanse said.

The number of new COVID-19 cases has flattened in New York in recent days, but the state has still recorded nearly 600,000 new infections and 6,800 deaths since Dec. 1.

The toll has been particularly high in nursing homes. At least 1,700 residents with COVID-19 have died in nursing homes since Dec. 1, according to a state count. The figure likely understates the number of fatalities, since New York doesn’t report how many nursing home residents died after being transferred to hospitals.

At least 13 staff members at the state’s 600 nursing homes have also died of COVID-19 since Dec. 1, according to federal records.

Around 7,600 nursing home workers have become ill during that time. That includes more than 100 infections among staffers at the 513-bed Van Duyn Center for Rehabilitation and Nursing in Syracuse, over 90 staff infections at the 350-bed Long Island State Veterans Home and at least 65 infections among staff at the 145-bed The Highlands at Brighton in Rochester, according to a federal tally.

Vaccinations have been available to nursing home residents and staff since late December, but distribution is moving more slowly than many hoped.

As of mid-January, about 37% percent of the nursing home workers in the state and two-thirds percent of residents had received at least one dose of the vaccine.

New York’s state health agency eased some restrictions in late December to allow most asymptomatic health care workers who were around someone who got COVID-19 to return to work after a 10-day quarantine period.

But at nursing homes and assisted living homes, the standard is tougher. Workers who may have been exposed to COVID-19 must remain furloughed from work for 14 days unless the nursing home receives special approval from the state for workers testing negative.

Nursing homes are tapping into staffing agencies, but prices can be exorbitant.

“We’re also seeing staffing agencies take advantage of the pandemic and demanding very high prices for temporary staff,” Hanse said. “I recently heard of a staffing agency out-of-state from Vermont that wanted to come in and for certified nursing assistants, you had to pay the staffing agency $65 an hour."

Meanwhile, Ten Broeck Center for Rehabilitation & Nursing in Lake Katrine is offering $2,000 sign-on bonuses for full-time certified nursing assistants, who would start at $15.25 an hour.

The state has a call center and an online staffing portal for nursing homes and hospitals facing staffing shortages, but nursing home operators say they are still struggling to attract help.

Nursing home operators said they haven't had much luck in recruiting retired nurses and doctors as volunteers — an option touted by Gov. Andrew Cuomo.

“I don’t know that we’ve had a lot of success in bringing workers back,” said Bruce Gendron, vice president of Buffalo, N.Y.-based Grand Healthcare System. “I think part of the issue is that retired workers are typically at an at-risk age themselves.”