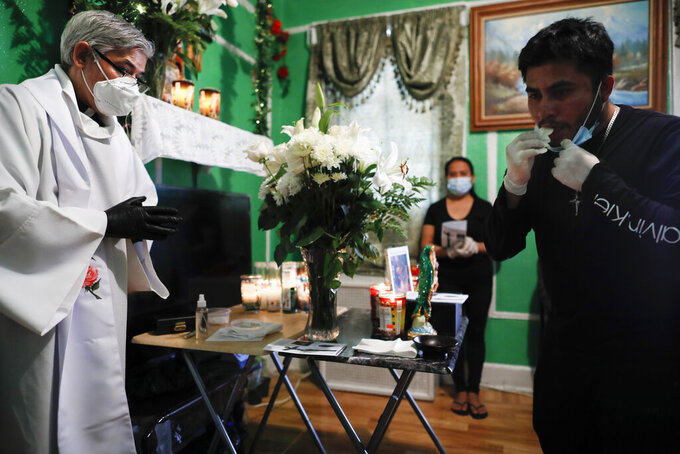 Family members receive communion by their own hand as the Rev. Fabian Arias, left, performs an in-home service beside the remains of Raul Luis Lopez who died from COVID-19 the previous month, Saturday, May 9, 2020, in the Corona neighborhood of the Queens borough of New York. (AP Photo/John Minchillo)

López was hospitalized for COVID-19 on April 3 before succumbing nearly three weeks later. The 39-year-old native of Oaxaca, Mexico, suffered from diabetes which worsened his illness. The day he left for treatment was the last time his wife, Sara Cruz, saw him.

Now López’s family, clad in surgical masks and gloves, was gathered in the widow’s living room in the Corona neighborhood of Queens, New York, around a black box of his cremated remains. A rendering of the Virgin of Guadalupe, patroness of Mexico and the Americas, watched over his ashes on a table beside flowers and prayer candles.

The Rev. Fabian Arias, from Buenos Aires, Argentina, is a Lutheran pastor at Saint Peter’s Church in Manhattan, and has performed funeral services 14 times in the last two months. Saturday’s service for López was the first he’s been able to perform in a private residence.

“Ninety-nine percent of funeral homes are not receiving people for religious ceremonies; they say ‘no,’” said Arias “They will take your body and provide cremation.”

The financial costs of services, already difficult for working-class families to afford, are compounded by the historic death toll thrusting funeral homes across the city into overcapacity. Most have ended traditional religious services and family gatherings, including cemetery burials.

Taking pains to protect himself from the contagion with personal protective equipment and hand sanitizers, he is led into the house on a quiet street in the heavily Latino neighborhood. Nearly a dozen family members inside wait to greet him, including López’s cousin Miguel Hernandez Gomez.

“The funeral homes didn’t give us any choice,” said Gomez. “If we had more choice, we would have done better for him.”

López, who worked in the delivery business, came to the United States 20 years ago and settled in New York nine years prior to his death. Described as a kind man devoted to his fellow parishioners, his loss pains family beyond the city’s borders.

“We’re planning to send him to Mexico but right now we don’t have international flights,” said Gomez. “We’re trying to get him to our town, for his mom, his dad, who are still alive in Mexico. He’s our family but he belongs to them, to his parents.”

Despite the risks, Arias is undaunted, trusting in God and taking great care to lessen transmission risks.

“It’s very hard for our community,” said Arias. “For all Latinos, when our people die, they receive a blessing. We say the last goodbye and pray together. It’s very important for us.”

When the service ended, the family, still wearing masks, moved to the kitchen to eat a meal; they spread out as much as possible.

“After this service, I feel much, much better and relieved that the spirit of Raul is released into God’s hands,” said Cruz. “Everybody is afraid, not only for ourselves, but for our community and especially Father Fabian and all the services he’s doing.”

“It’s very dangerous for him. But he’s here for us.”

This story was first published on May 9, 2020. It was updated on May 18, 2020, to correct the religious affiliation of Rev. Fabián Arias. He is an ordained Lutheran pastor, not a Roman Catholic priest and he’s a pastor at Saint Peter’s Church not Iglesia de Sion.