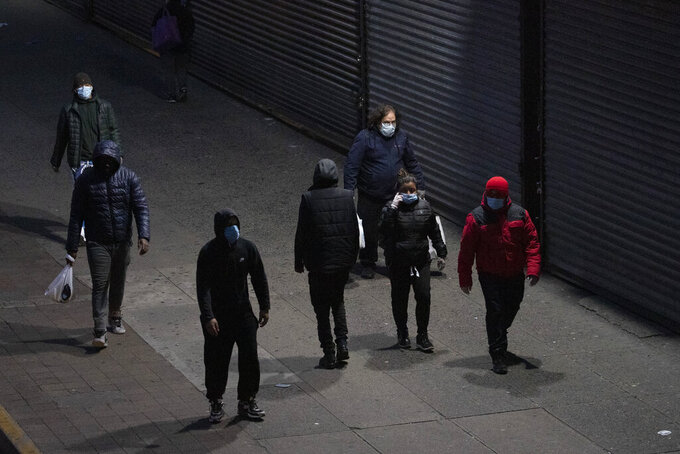 People walk at night on a quiet street in the Bronx borough of New York o Friday, April 17, 2020, during the coronavirus pandemic. Gov. Andrew Cuomo has issued a new executive order directing all New Yorkers to wear masks or face coverings while in public when social distancing does not permit them to remain 6 feet apart. (AP Photo/Mark Lennihan)

NEW YORK (AP) — New York's daily toll of coronavirus deaths hit its lowest point in more than two weeks, but Gov. Andrew Cuomo warned Saturday that the state isn't ready to ease up on shutdowns of schools, businesses and gatherings. For those looking for something to celebrate, however, the state is untangling some red tape around tying the knot: New Yorkers will be able to get marriage licenses online and wed via video during the crisis.

Here are the latest coronavirus developments in New York:

The daily increase in coronavirus deaths in New York state has dropped under 550 for the first time in over two weeks as hospitalizations continue to decline, Cuomo said Saturday.

But the crisis is far from over: Hospitals are still reporting nearly 2,000 new COVID-19 patients per day, and nursing homes remain a “feeding frenzy for this virus,” he said.

While the crush of patients has eased somewhat in emergency rooms, "that doesn’t mean happy days are here again,” the Democrat said at a news briefing. “We are not at a point when we are going to be reopening anything immediately.”

The state logged 540 deaths Friday from COVID-19, the lowest number since April 1.

Nearly 13,000 New Yorkers in all have died since the state’s first coronavirus case was reported March 1, the governor said. The state total doesn’t include more than 4,000 New York City deaths that were blamed on the virus on death certificates but weren’t confirmed by a lab test.

More than 2,700 people in New York nursing homes have lost their lives, more by far than in any other state.

Cuomo noted that the facilities are under pressure from staff shortages and illness and residents’ fragility.

For most people, the new coronavirus causes mild or moderate symptoms, such as fever and cough that clear up in two to three weeks. For some, especially older adults and people with underlying health problems, it can cause more severe illness, including pneumonia, and death.

Many marriage bureaus have been closed because of the health emergency, leaving couples unable to get licenses because the state requires the betrothed to complete their application in person.

But Cuomo is going to order that provision waived to let couples apply remotely, his office said Saturday. The state will also enable town and city clerks to conduct weddings by video.

“There is now no excuse when the question comes up for marriage. No excuse. You can do it by Zoom. Yes or no,” the governor said with a chuckle.

Earlier this week, New York City Mayor Bill de Blasio was asked at a news briefing about the possibility of online marriage applications, particularly for any couples seeking to wed so they could share health insurance after a job loss. Officials have said an estimated half-million city residents are out of work or likely to lose their jobs soon.

De Blasio said the online application idea was worth exploring, but he stressed that there are other ways for residents to get health insurance, including through the city's NYC Care program.

Three days after announcing a $170 million plan to ensure New York City residents have enough food amid job losses and stay-at-home orders, officials said the program is stepping up.

“We will not let any New Yorker go hungry,” de Blasio, a Democrat, vowed Saturday as he, Garcia and other officials visited a Bronx armory now serving as a food distribution center.

Taxi and livery drivers — whose work has largely stalled as New Yorkers stay home — have been engaged to deliver the meals to senior citizens and disabled people.

The city also is handing out 250,000 free meals a day at schools to anyone who needs them.

Even before the crisis, 1.2 million city residents struggled at times to feed themselves.

Marinas, boatyards and marine manufacturers are being allowed to open for personal use in New York, New Jersey and Connecticut, governors of the three states said Saturday.

Cuomo, New Jersey Gov. Phil Murphy and Connecticut Gov. Ned Lamont said social distancing and sanitizing protocols must be followed and chartered watercraft services and rentals will not be allowed. Restaurants at such sites also will be limited to take-out and delivery.

With a statewide face-covering requirement now in effect anyplace where people can't stay 6 feet away from others, the federal government has donated 1.5 million cloth masks for the state to distribute to the public, Cuomo said.