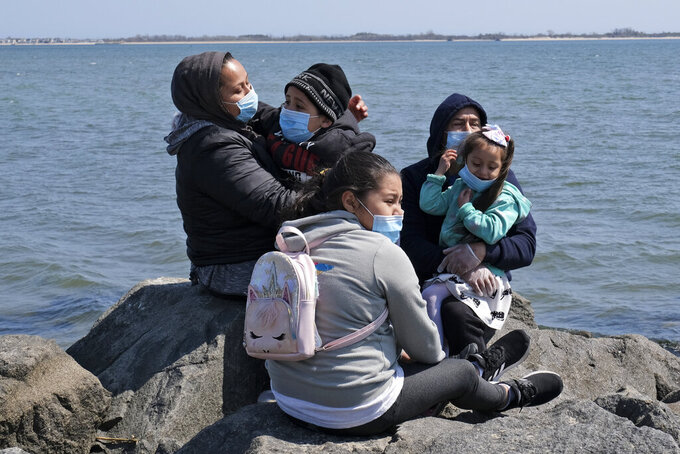 The Portilla family enjoys sunny weather on a beach in the Brooklyn borough of New York, Sunday, April 19, 2020. From left to right, Leyi Portilla, Alexander Portilla, 7, Michelle Portilla, 10, Kevin Portilla, and Ayleen Portilla, 4. Kevin Portilla said it was their first time outside their Queens apartment in three weeks, where they have been sheltering in place due to coronavirus. "I got 3 little kids and I'm scared to come out… we are scared about this virus," said Kevin Portilla. (AP Photo/Seth Wenig)

NEW YORK (AP) — New York City is barring its famous summer street celebrations for the month of June, and the state is exploring new ways to expand coronavirus testing. Amid hopeful trends in virus-related deaths and hospitalizations, officials in New York City and the state are trying to make sure the outbreak doesn't come roaring back.

“This is cause and effect on steroids,” Gov. Andrew Cuomo said Monday at his daily briefing. “What we do today will determine tomorrow.”

Here are the latest coronavirus developments in New York:

Mayor Bill de Blasio announced Monday that the events would be canceled or at least postponed, saying that it was a painful but necessary step as the city continues to fight the coronavirus.

“They will be back, and we will find the right way to do it,” he said, allowing that it's not yet clear whether it will be realistic to reschedule the events this year.

The Pride parade began in 1970 as a way to commemorate the Stonewall rebellion the year before, when a police raid at the Stonewall Inn bar sparked a resistance by gay men, bisexuals, lesbians and transgender people and led to the development of more extensive and militant LGBTQ activist groups than the U.S. had seen before.

“As the days have passed, it has become more and more clear that even with a decline in the spread of COVID-19, large-scale events such as ours are unlikely to happen in the near future,” Maryanne Roberto Fine, NYC Pride Co-Chair, said in a prepared statement. “We understand that we need to reimagine NYC Pride events - and have already begun to do just that.”

The Puerto Rico and Israel parades are also touchstones in a city that has the largest Jewish population outside Israel and the biggest Puerto Rican community off the island.

The number of people dying from COVID-19 in New York state continues to slowly drop, with 478 fatalities tallied on Sunday. It was a third straight day of decreases and the lowest death toll since April 1, when 432 people died. A record 799 deaths were recorded April 8.

More than 14,000 people have died in New York state since the start of the outbreak last month. The state tally excludes more than 4,000 New York City deaths that were blamed on the virus on death certificates but weren’t confirmed by a lab test.

After weeks of increases in deaths and hospitalizations in the epicenter of the U.S. outbreak, Cuomo said the big question now is how fast the descent will be.

More than 247,500 people in the state have tested positive for coronavirus, a number that does not include people who have not had a laboratory test.

The New York State Nurses Association charged in the lawsuits filed against the department, Montefiore Medical Center in the Bronx and Westchester County Health Care Corp. that its members have been forced to labor in unsafe working conditions without adequate masks or surgical gowns. The union also said sick nurses have been forced to return to work too early.

“These lawsuits were filed to protect our nurses, our patients and our communities from grossly inadequate and negligent protections,” Pat Kane, the executive director of the 42,000-member union, said in a statement.

Jonah Bruno, a spokesman for the health department, said the state “continues to take every step necessary to ensure that health care workers, particularly those who are sampling and providing direct care, have the support and supplies needed to address this unprecedented public health emergency.”

Westchester County Health Care, the parent company of Westchester Medical Center, said, “the allegations in NYSNA’s lawsuit are wrong.” And Montefiore said the union’s leadership “has chosen to attack a system, and the commitment of thousands of their colleagues, who have followed the governor’s emergency orders and are selflessly doing all they can to fight COVID-19 and save lives.”

Hundreds of thousands of New Yorkers would need to be tested for the coronavirus daily before city officials could start to loosen restrictions that have shuttered most workplaces and forced residents to cover their faces in public, de Blasio said Monday.

“To be able to come back you need testing to be — in our city probably hundreds of thousands of tests a day,” the Democrat said on MSNBC's “Morning Joe.” “You need temperature checks going into workplaces. You need all sorts of things to make sure that anyone who’s sick is immediately isolated and supported in quarantine.”

But he said New York can’t start reopening its economy without widespread testing “and so far the federal government still can’t get the handle on that.”

Cuomo said the state is starting a partnership with Ready Responders to bring testing and other health care services to an unspecified number of New York City public housing residents.

Also this week, New York is performing antibody tests on 3,000 people statewide. The tests for substances the immune system makes to fight the virus could help determine the percentage of the population that may now be immune, allowing more people to safely return to work, according to the Cuomo administration.

The city's struggle to secure medical masks, gloves, face shields and ventilators is easing somewhat, but the city may not have enough surgical gowns to get through the week, the mayor said.

He thanked the federal government for providing 265,000 coveralls this weekend and helping to line up enough material for city manufacturers to make 400,000 surgical gowns by the end of May.