NYC seniors find lighter side of pandemic in comedy class 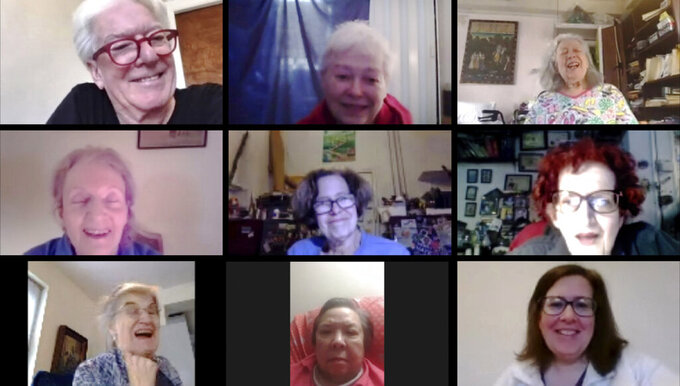 In this May 11, 2020, image made from video provided by Greenwich House, people laugh as they gather online for a comedy class through Greenwich House in New York. Professional comedian Jo Firestone leads the group through monologue bits and rapid-fire prompts as they all try for an hour to find humor during the coronavirus pandemic. (Courtesy of Celeste Kaufman/Greenwich House via AP)

Their city is under siege, their age group at particular risk and their lives increasingly isolated. But every Monday morning, one group of older New Yorkers is finding plenty to laugh about.

In a raucous hourlong kickoff to each week, the moment's gloomy news disappears into a staccato of jokes, impressions and asides at a senior center’s comedy workshop. Time and again, they look for humor in the realities of masked faces, shut-in existences and worries about infection.

“It releases a valve,” says Jo Firestone, a 33-year-old professional comedian, former “Tonight Show” writer and frequent TV presence who volunteered to lead the class for Greenwich House, a community organization that runs four senior centers in lower Manhattan. “Maybe they’re nervous laughs, maybe they’re release laughs, but it seems like it’s a healthy thing to joke about it.”

The class started in person a few weeks before the lockdown and has met online since. About 20 seniors veer from an anthropomorphized pizza slice’s soliloquy to a one-liner on memory loss.

And, then, a range of impressions: Little Miss Muffet brags of her youthfulness bringing perceived virus immunity. A hungry street dog, craving a fix, demands Alpo. Don Rickles delivers a lathered-up response to President Donald Trump’s comments on the curative promise of disinfectants.

Later, they go through a string of rapid-fire prompts, including worst online exercise classes (“Trampoline for arthritics,” one woman says) to ideas for late-night celebrity sketches (“Beer pong with Lesley Stahl,” one man offers). A week later, when students are asked to come up with ill-considered “life hacks,” all seem ready with a pandemic-perfect line.

“Have class face-to-face in a small room!”

“Use your mask as your G-string!”

“Have someone cough in your face!”

Interspersed are technological foibles — connection problems, and cameras that catch a senior retreating to bed or fixed on a shot, inexplicably, of a fitted sheet.

Firestone is unfailingly encouraging through it all, and classmates deliver laugh after laugh.

Tequila Minsky, who joined the class after her work as a freelance photographer and writer dried up in the lockdown, remembers students avoiding pandemic jokes at the start. But a shift occurred along the way and the virus is frequently the subtext, even if not explicit.

“It all is coronavirus. You don’t even have to say it,” says Minsky, who holds her age close to her vest.

As class ends, several students declare it the highlight of their week, an assessment Firestone shares.

Al DiRaffaele is one of those fans who lauds the workshop’s “brilliant timing.” The 74-year-old retired advertising firm partner logged on to class from a darkened room after a tough weekend in which he learned of a friend’s death. He feels the weight of the moment, just as he did when he survived the Vietnam War and an HIV diagnosis and kidney cancer. But he sees no reason to stop looking for laughs.

“I can still smile and look at life on the bright side,” he says, “and find the good in the negative.”

While nonstop global news about the effects of the coronavirus have become commonplace, so, too, are the stories about the kindness of strangers and individuals who have sacrificed for others. “One Good Thing” is an AP continuing series reflecting these acts of kindness.