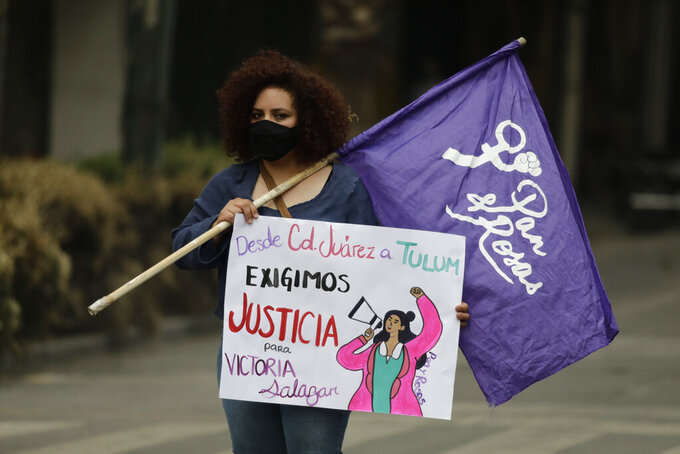 A woman holds a feminist flag and a sign that reads in Spanish "From Ciudad Juarez to Tulum we demand justice for Victoria Salazar," during a protest outside of the Quintana Roo state offices in Mexico City, Monday, March. 29, 2021. The demonstrators were protesting the police killing in Tulum, Quintana Roo state, of Salvadoran national Victoria Esperanza Salazar when a female police officer knelt on her back to cuff her. Mexican authorities say an autopsy confirmed that police broke her neck. (AP Photo/Eduardo Verdugo)

MEXICO CITY (AP) — Mexico is suffering “critical” failures in law enforcement and some of the worst levels of journalist killings outside a war zone, the InterAmerican Commission on Human Rights said in a report.

The Mexican government said Sunday that it is “strengthening its work” in the areas criticized by the commission, which is a body of the Organization of American States.

Those areas include lack of access to justice, weak police forces and the militarization of law enforcement. The report praised Mexico for searching for disappeared people, but activists say the government still largely relies on volunteer efforts led by relatives of the missing.

“During its visit, the commission found critical levels of impunity and inadequate attention for victims and their families,” the report said. “Threats, harassment, killings and disappearances of those who seek truth and justice have intimidated the Mexican public ... creating a big problem with under-reporting” of crimes.

“Barriers to access to justice and its inaction have resulted in many cases in crimes going unpunished, and have weakened the rule of law and constitute urgent challenges,” the report said.

The civic group Zero Impunity estimates that as of 2020, almost nine of every 10 homicides in Mexico go unpunished.

While the National Guard created by President Andrés Manuel López Obrador has taken over many law enforcement duties in Mexico, the report noted that it is a largely military force.

The commission recommended Mexico “develop concrete plans for the gradual withdrawal of the armed forces from civilian law enforcement, and turning it over to civilian police.” But the report added that “since 2018, the budgets for strengthening local police have decreased or been eliminated.”

López Obrador, who is known for austerity, took office in December 2018. He created the National Guard, but staffed it largely with soldiers as he eliminated the federal police.

López Obrador's administration has confronted rights abuses by soldiers by discouraging the National Guard and army from getting into confrontations, to the point that some units have been pushed around, disarmed or even briefly kidnapped by angry crowds.

The report cited Mexico's moves to search more seriously for the 85,000 people who have disappeared since 2006, when the country's war against drug cartels began.

The commission said it “welcomes the good practice of the Mexican government in guaranteeing the effective participation of relatives of disappeared people and civic groups.”

But activists say the government still largely relies on the efforts of volunteer groups led by relatives of the missing, who go out and search for clandestine grave sites.

Patricia Flores founded the Mother Searchers of Sonora in northern Mexico after her two sons disappeared. In two years, the group has found about 400 bodies in clandestine burial pits. She says authorities have been slow or unwilling to help, even though the searchers are often followed or threatened by apparent gang members.

“There is a lot of ineptitude on the part of the authorities,” Flores said. “They do not go out (on searches) with us. We have had a lot of problems, and we run a lot of risks.”