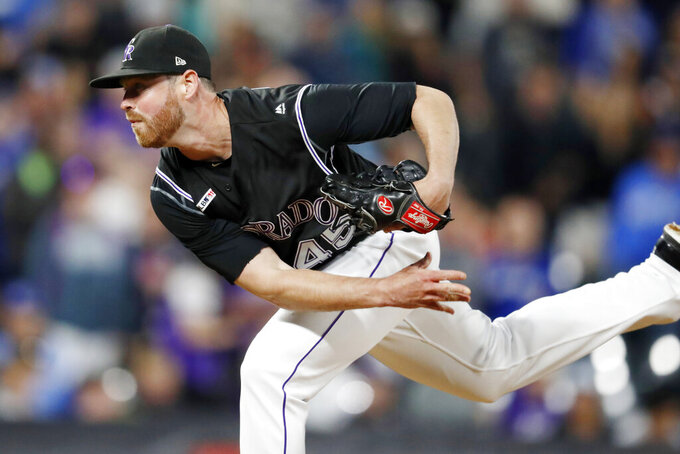 FILE - In this June 1, 2019, file photo, Colorado Rockies relief pitcher Scott Oberg follows through with a pitch against the Toronto Blue Jays during the ninth inning of a baseball game in Denver. Oberg is steadily making his way back to the mound after sitting out last season due to blood clots in his pitching arm. it was the third time over his career the clots have surfaced. (AP Photo/David Zalubowski, File) 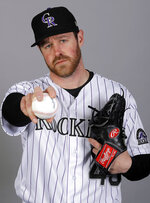 The morning after throwing in a game, Colorado Rockies right-handed reliever Scott Oberg showed up at the training facility in Arizona with a scary sensation that’s become all-too-familiar — numbness in his pitching arm.

The blood-clot issue — the one he hoped was finally behind him — had returned.

After surgery Thursday to dissolve blood clots in his right elbow, the status of Oberg for the season — possibly for his career — remains unknown. The Rockies placed Oberg on the 60-day injured list Saturday.

“We’re crushed,” Rockies manager Bud Black said of the news. “This one hurts. He’s in relatively good spirits overall. From the team, we’ll support Scotty, put our arms around him when we see him.”

What’s next for Oberg will be more consultations with specialists to see what else can be done as he deals with blood clots for the fourth time in his career. He was optimistic the issue was under control after undergoing thoracic outlet surgery last September.

It’s a big blow to the Colorado bullpen. Oberg, who turned 31 on March 13, was steadily working his way back to the mound after missing all of the 2020 pandemic-shortened season due to a blood clot.

He hasn’t appeared in a big league game since Aug. 16, 2019, against Miami. A few days after that outing, he went on the injured list with axillary artery thrombosis (blood clot) in his right arm.

Oberg went through genetic testing after the first time the clot happened in 2016. That link was ruled out.

“He was really finding his way as a reliable, consistent big league relief pitcher,” Black said. “It looked as though he was on his way to a nice run of performance for years, barring any health issues. He was in a really good spot, delivery-wise, stuff-wise, mentally confident, overall strength in his body. He was doing great.”

Case in point: Oberg's performance during the 2018 NL wild card game against the Chicago Cubs when he struck out all four batters he faced to earn the win.

“Scott Oberg at the end of that game getting that done,” Black fondly recalled.

Black said Oberg threw in a “B” game Wednesday and showed up at the park Thursday with some circulatory issues in his hand.

Knowing his history, the trainers and medical staff got him in to see the doctors and surgery was performed later that day.

“We’re all devastated by this, knowing Scotty like we do and knowing some of the heartache he’s been through over his career as it relates to this,” Black said. “These things are difficult because you become part of these guys’ lives. They become part of the family. This one hurts.”