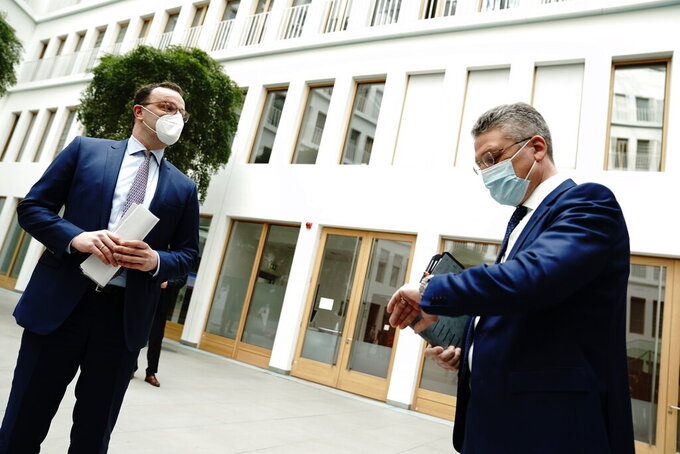 Jens Spahn, Federal Minister of Health, left, and Lothar Wieler, President of the Robert Koch Institute, arrive for the press conference on the Corona situation before Easter in Berlin, Germany, Friday, March 26, 2021. (Kay Nietfeld/dpa via AP)

BERLIN (AP) — German health officials warned Friday that the country's latest eruption of coronavirus cases has the potential to be worse than the previous two last year, and urged people to stay at home during the upcoming Easter break to help slow the rapidly rising numbers of new infections.

Health Minister Jens Spahn told reporters that more than 10% of Germans had now received at least a first dose of a COVID-19 vaccine and that the rollout of shots, which has been criticized as too slow, was gathering speed.

At the same time, he urged people to get tested regularly, observe hygiene and distancing recommendations and to avoid contact with large groups of people.

“The numbers are rising too quickly,” Spahn said. “If this continues unchecked, there's a danger that our health system will in April, during the course of April, be stretched to its limit.”

Lothar Wieler, head of Germany's disease control center, the Robert Koch Institute, said that Germany is just at the “beginning of the third wave” of the pandemic. He said the more contagious variant of the virus first detected in Britain is now the dominant one in the country.

“It's more contagious and more dangerous, and thus more difficult to stop,” Wieler said. “There are clear signals that this wave could be even worse than the first two waves.”

“All the indicators at the moment point toward it getting worse in the coming weeks,” Wieler said.

He said if Germans used the Easter period to further reduce contact, it would at least be possible to lessen the severity of a third wave.

“We can't stop this wave anymore, but we must try to flatten it as strongly as possible,” Wieler said. “Therefore, we have to reduce infections with all methods we have available.”

Not all German states have shown willingness to do that, however.

Authorities in Berlin refused to use the “emergency brake” agreed to by the 16 state governors and Chancellor Angela Merkel of pausing any easing of virus-prevention measure when weekly infection rates rise above 100 newly confirmed cases per 100,000 inhabitants.

The governor of Bavaria, Markus Soeder, called Berlin's decision a “dire signal” and accused some political leaders in the country of losing their nerve ahead of Germany's national election in September.

Germany will require all airline passengers entering the country from abroad to take a coronavirus test from Monday night.

Through at least May 12, all travelers will have to show a negative test result from within the previous 48 hours before boarding planes to Germany.

Spahn said the measure was meant to reduce the possibility of infections being brought in, but alone was not a “game changer for the Easter holidays.”

Merkel's spokesman declined to say whether the chancellor would be traveling to her holiday home north of Berlin for Easter. But spokesman Steffen Seibert said that, speaking in general terms, “the chancellor will certainly adhere to all the recommendations that apply to us all.”

Frank Jordans contributed to this report.