Officials worry about virus outbreaks in parts of Indiana 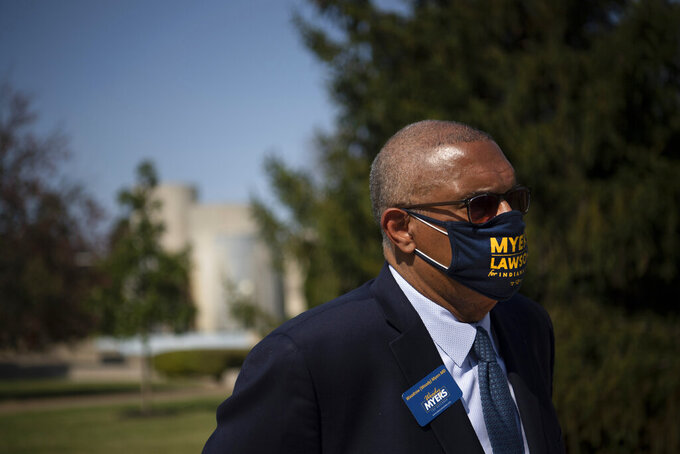 INDIANAPOLIS (AP) — Local health officials warned Wednesday about a growing number of COVID-19 illnesses in the Evansville and South Bend areas as the state health department reported rates of new infections and hospitalizations across Indiana much higher than two weeks ago when Republican Gov. Eric Holcomb decided to lift most statewide precaution rules.

Democratic governor candidate Woody Myers lambasted Holcomb’s move as putting lives as risk, while Holcomb’s top health adviser defended the step by pointing out that nearly half of the state’s counties are at the lowest risk of infection spread under statewide tracking guidelines.

Elkhart County saw around 350 new infections this past week, which health officials warn was similar to when the county was among the country’s coronavirus hot spots in June.

“One of the key indicators from the governor was hospitalization rates," Sizemore said. “When we are looking at the fact that our hospitals are more full now than what they were when we were considered a hot spot, that is very concerning to us.”

Myers, a physician and former state health commissioner, told reporters that he believed Holcomb had abandoned his responsibility to protect public health. Myers said he believed tougher enforcement of the statewide mask mandate was needed and that actions such as closing bars again should be done in some parts of the state.

“Sadly, because of the decisions of our state leaders, more Hoosiers will likely die,” Myers said. “... All the scientific facts mean that we’re going to have a great deal more of this virus in our state to deal with in the coming weeks and months in addition to seasonal influenza.”

The state health department’s coronavirus update Wednesday showed Indiana’s seven-day rolling average of new cases of the respiratory disease continued growing at record levels as it reached 1,178 through Tuesday. That rolling average has grown about 40% since Sept. 24.

The agency also added 17 coronavirus-related deaths to Indiana’s pandemic toll that has reached 3,727, including confirmed and presumed COvVID-19 infections since mid-March. That’s an increase of 95 deaths in the past week.

State statistics show that Indiana hospitals were treating 1,081 COVID-19 patients on Tuesday — a level the state last recorded in late May and the 12th straight day that hospitalizations have topped 900.

Those increases come even as health experts say it could be weeks before the state sees any possible impact from Holcomb’s decision to lift nearly all restrictions on businesses and crowd sizes as of Sept. 26 while continuing the statewide mask mandate.

Holcomb didn’t take questions from reporters during Wednesday’s state government coronavirus briefings for the first time since the pandemic hit the state in mid-March after announcing last week he was turning those largely over to Dr. Kristina Box, the state health commissioner.

Box said her agency was paying attention to locations with more cases and hospitalizations.

Holcomb’s decision to ease restrictions comes as he’s faced discontent from some conservatives who object to his coronavirus restrictions and the mask mandate and say they’ll vote for Libertarian governor candidate Donald Rainwater in November's election.

The seven counties in Indiana’s southwestern corner, including Evansville’s Vanderburgh County, were all designated at orange or red levels as higher risk locations for coronavirus spread on the state health department’s county-by-county tracking map that was updated Wednesday.

Joe Gries, the Vanderburgh County Health Department administrator, said it was clear many people are tired of following precautions to slow down the virus spread.

“You have people becoming a little less persistent with following guidelines and doing things that they need to do to protect them and protect people around them,” Gries said. “It’s COVID fatigue.”

The state health department gave 83 of Indiana’s 92 counties the less-serious yellow or blue ratings. Those at the yellow rating included South Bend’s St. Joseph County and neighboring Elkhart County despite the concerns of local health officials.

St. Joseph County’s hospitals have their most COVID-19 patients at any point in the pandemic, and deputy county health officer Dr. Mark Fox said he thought the governor’s easing of restrictions was premature.