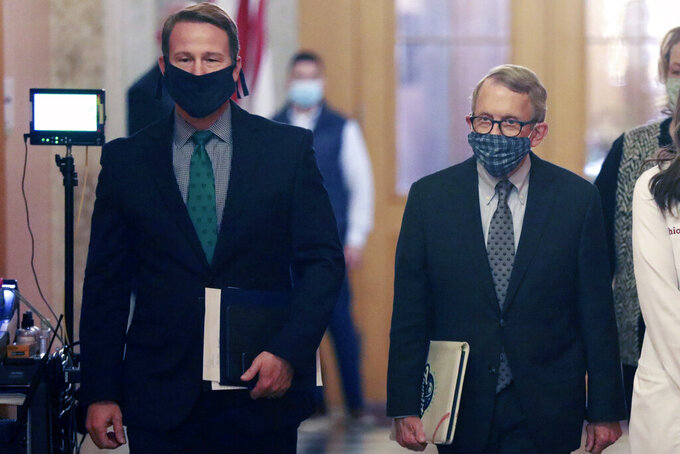 FILE— In this April 15, 2020, file photo, Ohio Lt. Gov. Jon Husted, left, and Gov. Mike DeWine, walk into their daily coronavirus news conference at the Ohio Statehouse in Columbus, Ohio. Records show that DeWine unsuccessfully proposed a compromise to legislation restricting the state's ability to respond to a public health order emergency. In proposals made last weekend by Husted to House Speaker Bob Cupp and Senate President Matt Huffman, DeWine signaled he would support the bill if it called for governors' emergency declarations and orders to remain in place as they do now unless the Legislature acts. (Doral Chenoweth/The Columbus Dispatch via AP, File)

The governor was open to giving lawmakers some oversight over public health orders. But he wanted more involvement from them when it came to overturning such orders, according to an email obtained by The Associated Press.

DeWine also proposed putting representatives of the governor's office at the table with lawmakers as they reviewed public health orders, according to the March 21 email from Dan McCarthy, DeWine's legislative affairs director, to GOP Senate President Matt Huffman.

“We hope they provide a solid foundation for a further conversation,” McCarthy told Huffman, referring to the governor’s proposals. The AP obtained the email through a public records request.

The bill in question would allow state lawmakers, by a simple majority, to rescind public health orders issued by the governor or the state Health Department as soon as they take effect, as well as prevent the governor from reintroducing similar orders for at least 60 days.

The bill would also limit state of emergency orders to a period of 90 days but allow lawmakers to extend them in 60-day increments indefinitely.

In proposals made last weekend by GOP Lt. Gov. Jon Husted to Huffman and House Speaker Bob Cupp — both Republicans — DeWine signaled he would support the bill if it called for governors' emergency declarations and orders to remain in place as they do now unless the Legislature acts.

As part of that change, the administration proposed requiring a two-thirds majority to rescind an order within the first 90 days of an emergency, and a three-fifths majority after 90 days, the email said.

The governor also wanted three ex officio appointees on a newly created legislative committee that reviews health orders. In addition, DeWine wanted the ability to reissue an order 30 days after the Legislature overturned it.

Those proposals weren't accepted, and DeWine vetoed the bill Monday, saying it was both unconstitutional and a dangerous restriction of the state's ability to fight future health emergencies. GOP lawmakers in the House and Senate overrode that veto Wednesday, the first override of DeWine's tenure as governor.

Compromise on some measures of the bill was not possible, such as a requirement that stops the state from forcing someone to quarantine unless they’ve been medically diagnosed with an illness or have come into contact with someone who has, DeWine spokesperson Dan Tierney said Friday.

But in other cases, particularly giving more authority to lawmakers, the governor was willing to negotiate, he said.

“He’s not opposed to legislative oversight, but there are provisions in this bill that went too far and would harm the public health of the state of Ohio,” Tierney said.

The legislation simply gives lawmakers the power to review orders issued by the Ohio Department of Health, with more than 30 states having similar laws, Huffman, a Lima Republican, said this week.

“The people must never feel forgotten, especially during times of emergency, when unchecked power can be used to impact lives and livelihoods,” Huffman said.

A Huffman spokesperson on Friday dismissed DeWine's proposals for the bill, known as SB 22, calling them a delay tactic that lacked substance.

“If the administration was really serious about working with the General Assembly it would’ve submitted ideas when SB 22 was introduced at the end of January,” said Senate Republican caucus spokesperson John Fortney.

Multiple public health departments also criticized the bill, saying it would slow down or block local officials from ordering businesses to close or requiring residents to quarantine or isolate without a medical diagnosis.