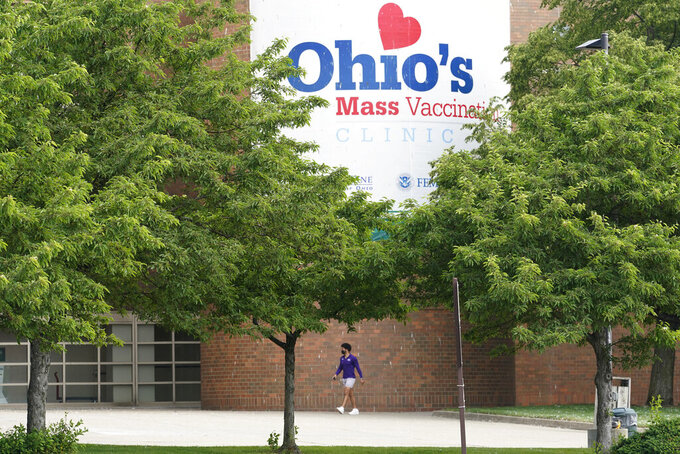 FILE - In this May 25, 2021, file photo, a man walks by the entrance for Ohio's COVID-19 mass vaccination clinic at Cleveland State University in Cleveland. Ohio plans to announce its third pair of Ohio Vax-a-Million winners Wednesday evening, June 9, 2021, even as the initial bump from the incentive program fades and the vaccination numbers continue to drop. (AP Photo/Tony Dejak, File)

COLUMBUS, Ohio (AP) — The state announced the fourth pair of Ohio Vax-a-Million winners Wednesday evening even as the bump from the incentive program fades and vaccination numbers remain stagnant.

Suzanne Ward of Findlay, in Hancock County, won the $1 million prize and Sean Horning, of Cincinnati, won the college scholarship. Their names were announced at the end of the Ohio Lottery's Cash Explosion TV show.

Republican Gov. Mike DeWine’s May 12 announcement of the incentive program had the desired effect, leading to a 43% boost in state vaccination numbers over the previous week. But numbers of vaccinations have dropped since then.

Earlier this month DeWine warned about 200,000 doses of the Johnson & Johnson vaccine were set to expire on June 23, but the Food and Drug Administration last week extended the expiration date by six weeks.