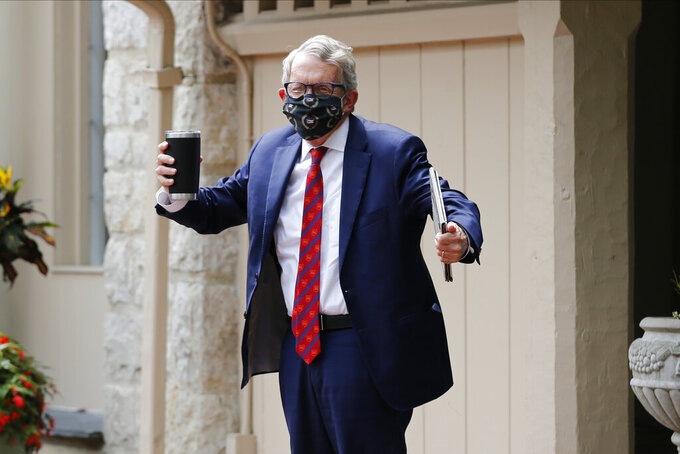 The governor also said the state's 10 p.m. to 5 a.m. pandemic curfew, due to expire in a couple days, will be extended, though he didn't provide details. Meanwhile, Lt. Gov Jon Husted said the state is wrestling with huge numbers of fraudulent unemployment claims being filed for federal pandemic aid.

Of 1.4 million of those claims, nearly 800,000 have been flagged as fraudulent, including a claim someone made in Husted's name, the lieutenant governor said.

Users will receive online guidance to take the tests, and the results will be recorded with the Ohio Department of Health, according to eMed. Local health departments have been asking for this type of rapid testing, DeWine said.

“We think that this would be very, very helpful in slowing the spread of the virus,” the governor said. “If we get a hot spot somewhere, if there would be an outbreak in a factory, we would be able to move in very, very quickly.”

The rapid antigen tests are not as reliable as PCR tests, which examines genetic material specific to the virus. DeWine experienced this disparity last summer when he had a false positive antigen test, followed a few hours later by a negative PCR test.

The bigger concern is “false negatives," said Ohio chief medical officer Dr. Bruce Vanderhoff. That means testing that shows a negative result even though the patient may have the coronavirus.

“A negative antigen test does not really give you the kind of confident answer that a positive test does,” Vanderhoff said. “But if you have a positive result, then you know what you need to do.”

Regarding the curfew, DeWine said he understands the frustration of bar and restaurant owners who say the 10 p.m. cut-off is arbitrary and the same precautions against social distancing can be made later into the evening.

The curfew was a compromise with experts who said bars and restaurants should be shut down altogether, said DeWine, reiterating a point he's made often.

The next step might be to extend the curfew to 11 p.m., “but we're just not there,” the governor said.

The latest figures show Ohioans filed 42,975 initial jobless claims for the week ending Jan. 16, a 15% increase over the previous week, the Department of Job and Family Services said. Ohioans also filed 265,467 claims for continued unemployment, slightly down from previous weeks.

More than 450,000 Ohioans — or about 4% of the state’s population — have received at least one dose of the Pfizer or Moderna vaccines since mid-December.