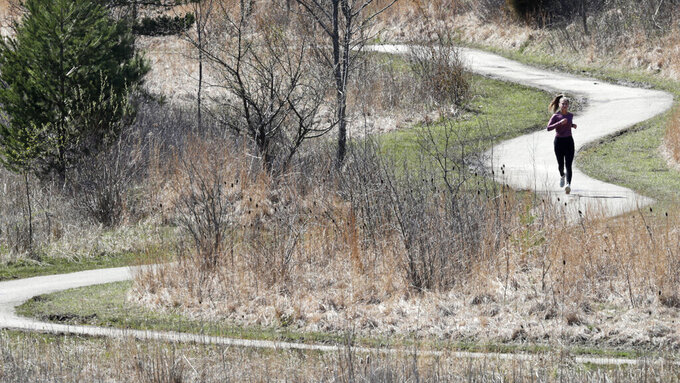 In this Monday, April 20, 2020 file photo a woman jogs at Beachwood City Park West, in Beachwood, Ohio. The first numbers from the 2020 census show southern and western states gaining congressional seats while several northern states are losing residents. The once-a-decade head count shows where the population grew during the past 10 years and where it shrank. (AP Photo/Tony Dejak)

Ohio's solicitor general on Wednesday urged a panel of appellate judges to hold the U.S. Census Bureau's feet to the fire by issuing an order that would require the statistical agency to release data used for redrawing congressional and legislative districts by mid-August.

Solicitor General Benjamin Flowers told three federal judges on an appellate court in Cincinnati that an order was needed, given past deadlines the Census Bureau has blown in releasing data from the 2020 census. The bureau has cited the pandemic and anomalies that needed fixing as reasons for its deadline delays.

“It's good they are planning to get it by August 16, but as we have seen over the past year, sometimes their plans don't come to fruition, and so a court order requiring that it be done by then is what we are ultimately looking for," Flowers said during a virtual court hearing.

But an attorney representing the Commerce Department, which oversees the Census Bureau, said an order wasn't necessary. A better idea would be to send the case back to a lower court where the Census Bureau could provide regular status updates on its progress toward meeting the Aug. 16 goal of releasing the redistricting data, Department of Justice attorney Mark Stern said.

“The Census Bureau obviously understands the importance of getting this to the states, and it's working to do that," Stern said.

Referring to Ohio, Stern said, “Our views are starting to look very similar in that we both want to get that gold standard to Ohio and other states."

Ohio sued the Commerce Secretary earlier this year after the Census Bureau said it would be unable to meet a legal deadline to release the redistricting data to the states by March 31 because of delays caused by the pandemic. The bureau said the data would be available in an older format in August and in a more user-friendly format by the end of September. A federal judge dismissed Ohio's case and the state appealed, saying the delay threatened its ability to meet redistricting deadlines approved by voters and set in its state constitution.

Ohio’s constitution requires, for the first time, an independent commission to finish redrawing legislative districts by Sept. 1. It sets a Sept. 30 deadline for the state’s General Assembly to complete a new map of congressional districts.

“We didn’t bring this lawsuit to try to bully the Census. We brought this lawsuit because we really need the data for the redistricting process to go smoothly," Flowers told the judges Wednesday.

The redistricting data includes counts of population by race, Hispanic origin, voting age and housing occupancy status at geographic levels as small as neighborhoods. The data are used for drawing voting districts for Congress and state legislatures. Unlike past decades when the data were released to states on a flow basis, the 2020 redistricting data will be made available to the states all at once, according to the Census Bureau.

A similar lawsuit was filed by the state of Alabama, with the added twist that the Cotton State's case also challenges the Census Bureau's use of a statistical method to protect people's privacy, claiming it will result in inaccurate numbers. Oral arguments were made last week in Alabama, and a panel of three federal judges could rule at any time.

The Ohio appellate judges did not say when they would rule.

Last month, the Census Bureau released the first data from the 2020 census — state population counts used to determine how any congressional seats and Electoral College votes each state gets. The once-a-decade count of every U.S. resident also helps determine $1.5 trillion in federal spending each year.