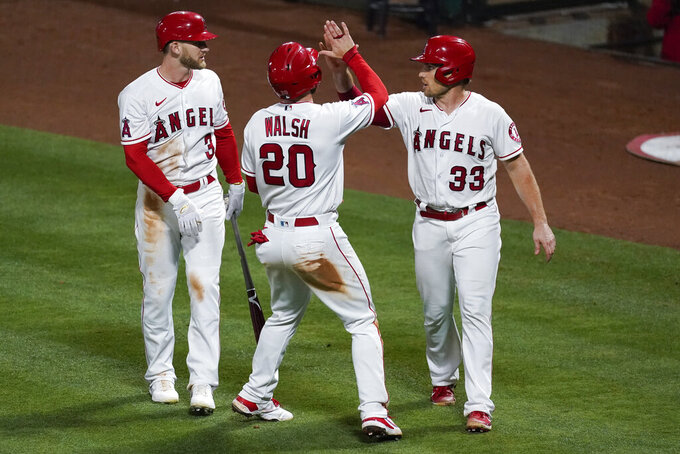 Los Angeles Angels' Jared Walsh (20) and Max Stassi (33) celebrate with Taylor Ward (3) after Walsh and Stassi scored off of single hit by Juan Lagares during the eighth inning of a baseball game against the Seattle Mariners Saturday, June 5, 2021, in Anaheim, Calif. (AP Photo/Ashley Landis) 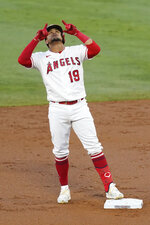 ANAHEIM, Calif. (AP) — Considering the Los Angeles Angels' struggles the first two months of the season, it would have been easy to write them off after Alex Cobb gave up a grand slam during the fourth inning Saturday night, giving the Seattle Mariners a four-run lead.

Instead of packing it in, the Angels responded with one of their best offensive performances of the season. Los Angeles put up a season high in runs and had eight hits go for extra bases in its 12-5 victory.

“When you’re down a grand slam it takes the air out of the balloon, but it didn’t feel that way,” manager Joe Maddon said. “There was a strong sense we could do it and we did.”

Shohei Ohtani hit his 16th homer of the season and Taylor Ward hit the go-ahead drive in the sixth inning for Los Angeles, which has won five of its last seven. The Angels are 9-9 since three-time AL MVP Mike Trout went on the injured list due to a sore right calf.

“When you have good days you need to capitalize. When that grand slam went out, the only thing I thought was we weren’t losing. Fortunately the offense went off,” said Cobb, who won his third straight game. “You can feel the pace of the game and really tell if we would be able to mount a comeback. It had that feeling tonight.”

The Angels came back after Seattle starter Yusei Kikuchi was hit in the right knee by David Fletcher's comebacker in the fifth inning. Kikuchi fell to the ground writhing in pain and exited with a bruise.

Seattle manager Scott Servais said after the game that Kikuchi will be examined again on Sunday.

“We don’t think it is a fracture We'll wait and see how he feels and go from there,” Servais said. “He was throwing the ball great and was on top of his game until the line drive took him out.”

Ward gave Los Angeles a 6-5 lead with a two-run homer with two outs in the sixth off Drew Steckenrider (2-2).

Los Angeles trailed 5-1 in the fourth inning after Jake Fraley hit his first career grand slam. The Angels then scored in five straight innings, capped by a five-run eighth.

Cobb (4-2) went seven innings, allowing three hits. He retired the last 11 batters he faced after giving up the grand slam.

Ohtani, who struck out 10 while pitching the Angels past the Mariners on Friday night, hit a solo home run in the first. Max Stassi's solo shot made it 4-2 in the fourth.

With one out and a runner on first in the fifth, Fletcher's comebacker struck Kikuchi. Catcher José Godoy grabbed the ball and tried to throw out Fletcher at first, but his toss sailed high into right field, allowing Ward to score from first.

Seattle trainers attended to Kikuchi and the Japanese left-hander exited with the Mariners leading 5-3. Fletcher later scored on a two-out single by Anthony Rendon.

The Angels added an run in the seventh on a Rendon RBI grounder before breaking it open in the eighth with five more.

MARINERS GET FIVE IN FOURTH

Cobb retired Seattle in order the first three innings before running into trouble in the fourth. J.P. Crawford led off with a walk and Mitch Haniger hit a bloop single. Ty France was hit by a pitch to load the bases with one out.

Taylor Trammell then hit a high infield chopper that Cobb was unable to get his glove on, tying the game at 1. That set the table for Fraley, who lined a splitter just over the wall in center field and the glove of Juan Lagares.

Fraley came into the four-game weekend series with no home runs, but has hit two in three games.

“Ay time you hit a grand slam you think you’re going to be in great shape,” Servais said. “It got crazy at the end. They were squaring some fast balls up and we need to make an adjustment going into tomorrow.”

Kikuchi, who came into the game with a 3-3 record, was pitching well against the Angels. He had eight strikeouts and allowed two runs, both on home runs, through four innings.

Already this week, Seattle right-hander Justin Dunn went on the injured list due to right shoulder inflammation and shortstop Kyle Lewis, last season’s AL Rookie of the Year, is expected to miss a significant amount of time because of a torn meniscus in his right knee.

Ohtani went deep for the first time in eight games with a 436-foot drive to center field. He is two behind major league home run leader Vladimir Guerrero Jr. of Toronto.

It also was Ohtani's third career homer off a Japanese born player and second off Kikuchi (both attended Hanamaki Higashi HS in Iwate, Japan).

It is also the most home runs Ohtani has had through his first 56 games in a season in the big leagues. He had 14 at this point in 2019.

Ohtani added a two-run double in the eighth. He is tied for second in the majors in extra-base hits (31) and tied for sixth in RBI's with 42.

Mariners: Steckenrider was taken off the COVID-19 injured list. He was on the IL on May 21 and had spent most of the past two weeks quarantining in San Diego before returning to the team on Thursday.

Angels: SS José Iglesias was reinstated from the injured list after INF Jose Rojas was optioned to Triple-A Salt Lake. Iglesias missed nine games due to a left hamstring strain.