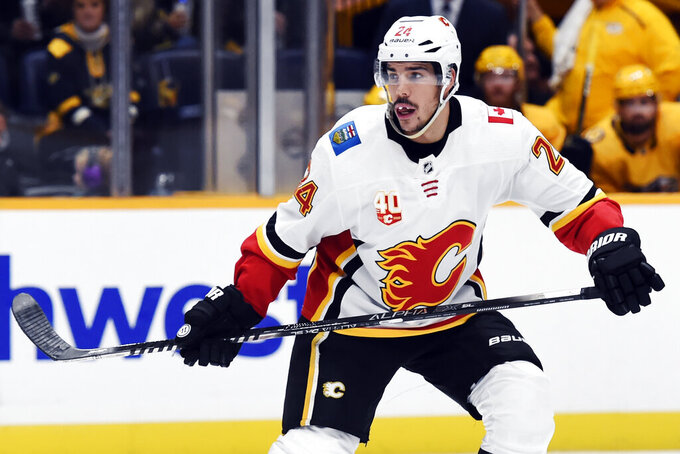 FILE - In this Oct. 31, 2019, file photo, Calgary Flames defenseman Travis Hamonic (24) plays against the Nashville Predators during the first period of an NHL hockey game in Nashville, Tenn. The Flames won't have Hamonic for the resumption of the hockey season after he decided to opt out for family reasons. Hamonic on Friday night, July 10, 2020, became the first player to publicly choose not to play in light of the COVID-19 pandemic. (AP Photo/Mark Zaleski, File)

Roman Polak of the Stars and Mike Green of the Oilers are opting out of playing, and Lightning captain Steven Stamkos will try to play after recovering from injury.

In the aftermath of a deal being struck to resume the NHL season, Aug. 1, Green, Polak and three other players joined Calgary defenseman Travis Hamonic in choosing not to participate in the expanded 24-team playoffs.

"Due to the uncertainties surrounding COVID-19 and after much consideration, I’ve decided for deeply personal family health reasons not to participate in the return to play,” Green said in a statement. After a trade from Detroit, the defenseman played two games for Edmonton before injuring his right knee.

Boston’s Steven Kampfer, Montreal’s Karl Alzner and Vancouver’s Sven Baertschi also decided to opt out. Kampfer, who played 10 games with the Bruins this season, said his wife and son have a congenital defect that could cause complications with the virus and called it “one of the hardest decisions” he has had to make.

Polak is a pending free agent who last month agreed to a deal in his native Czech Republic next season and told reporters there he wasn't planning on returning to the NHL if play resumed. Baertschi, who spent most of this season in the minors, is under contract through 2020-21.

“Sven informed us late yesterday that he has chosen to opt out of the NHL return to play program," Canucks general manager Jim Benning said. "It was a difficult decision but ultimately one we respect and understand.”

The Lightning won't have Stamkos at 100% for the opening of camp because of a lower-body injury, but they're optimistic he'll be ready when games get under way in early August. GM Julien BriseBois said Stamkos fully recovered from core muscle surgery in early March but was injured again during voluntary workouts.

While Stamkos has a better chance of being ready for Tampa Bay's next game than he would have after surgery if the playoffs had started in mid-April, the Flames will have to cope without Hamonic when they open their series against Winnipeg on Aug. 1.

Hamonic became the first player to publicly choose not to play in light of the coronavirus pandemic. Hamonic's daughter was hospitalized last year with respiratory issues, and he and his wife also have a baby boy. Their health concerns, not the soon-to-be 30-year-old's impending free agency, led him to opt out.

“I wish I could lace up my skates and be out there battling, blocking a shot and helping my team win, but my family has and always will come first,” Hamonic said. “Being my little kids’ dad every day is the most important job I have. I love this game and my team. This is a decision that is extremely hard for me to make."

The Lightning already got a pandemic scare when three players and additional staff tested positive for the novel coronavirus last month. The positive test results forced the team to close its facilities for a brief period of time.

The Minnesota Wild, who face the Canucks in the qualifying round, ruled out defenseman Greg Pateryn indefinitely with an upper-body injury. NHL deputy commissioner Bill Daly said Saturday the league will be taking over injury and illness disclosure from teams as a way of protecting player privacy.

“Medical privacy is important in this process,” Daly said. “Having said that, we understand as a league we have an obligation of some transparency with respect to the COVID virus in particular, so at least for now we’re going to maintain a policy where the league is announcing on basically league numbers and clubs are really prohibited from giving any information with respect to COVID test results, and, for purposes of making the system work, any injury information going forward.”