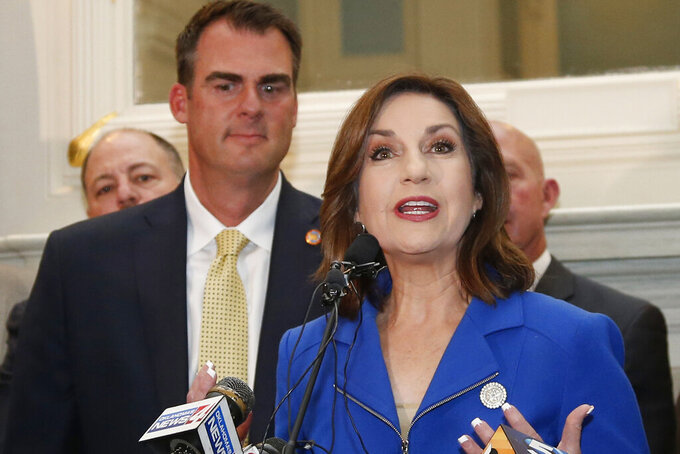 FILE - In this May 16, 2019, file photo, Joy Hofmeister, Oklahoma's State Superintendent of Public Instruction, speaks during a news conference accompanied by Oklahoma Gov. Kevin Stitt, left, in Oklahoma City. Some Oklahoma educators oppose Gov. Stitt's waiver of a mandatory quarantine for public school students, teachers and staff who are exposed to the coronavirus in schools that have a mask mandate. A spokesperson for Hofmeister said Wednesday, Jan. 13, 2021, that Hofmeister did not know about Stitt's plan and was not asked for input. (AP Photo/Sue Ogrocki File)

OKLAHOMA CITY (AP) — The state school superintendent is among Oklahoma educators who oppose Gov. Kevin Stitt’s waiver of a mandatory quarantine for public school students, teachers and staff who have been exposed to the coronavirus.

Under the waiver Stitt announced Tuesday, if the exposed person shows no symptoms and attends a school where masks are required, no quarantine is necessary.

Carrie Burkhart, spokesperson for state Superintendent Joy Hofmeister, said Wednesday that Hofmeister had been unaware of Stitt's plan for a waiver.

“No, we did not know about it and we were not asked for any input,” Burkhart said.

Hofmeister said in a statement that she believes everyone wants students and teachers back in classrooms. But, she said, the Center for Disease Control and Prevention recommends that those who come into close contact with a person who has tested positive for COVID-19 be quarantined.

“The ramifications of the pandemic on education have been challenging and severe. While this option underscores the need for mask requirements in school, I cannot in good conscience support ignoring quarantine guidelines from the CDC," Hofmeister said.

Stitt has resisted a statewide mask mandate, saying he does not believe it is enforceable, but has encouraged mask wearing in public.

Charlie Hannema, a spokesman for Stitt, said Wednesday that the governor stands by the plan.

“This is backed by data and is supported by the state health department ... this is the right thing for our kids,” Hannema said Wednesday.

Stitt cited an American Academy of Pediatrics study in North Carolina that found 32 in-school transmissions of the virus among 773 COVID-19 cases at schools that followed safety procedures including mask wearing, social distancing and frequent hand-washing.

Oklahoma City school Superintendent Sean McDaniel agreed that the waiver doesn’t appear to follow federal guidelines for quarantines, and that Stitt was using old data when he said 59% of high school students were failing at least one class.

“OKCPS has seen marked improvement since our first few weeks of school, which is what the data he used ... represented,” McDaniel said.

Stitt named both the Oklahoma City and Tulsa school districts as not allowing in-person class options during the fall semester. Both districts have announced plans for in-person classes in the spring semester.

The Oklahoma State Department of Health on Wednesday reported 341,364 total virus cases and 2,848 deaths since the pandemic began in March, increases of 3,907 cases and 44 more deaths than Tuesday.

Oklahoma was fourth in the nation Wednesday in the number of new cases per capita with 1,361.27 per 100,000 residents, according to data from Johns Hopkins University.