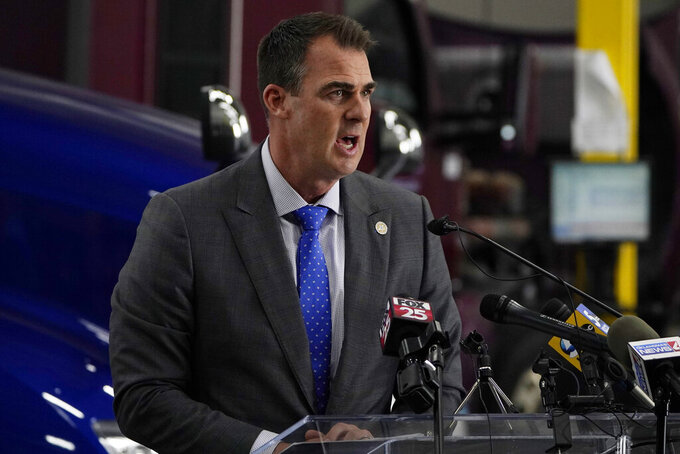 To incentivize unemployed people to return to the work, Stitt said the state will offer a $1,200 stipend for the first 20,000 workers who get off unemployment and work at least 32 hours per week at a qualifying job. Claimants can begin applying on June 28.

“As Ronald Reagan once said, the best social program is a job," Stitt said at a trucking company in Oklahoma City, flanked by several employers who said they are having a hard time finding workers to fill jobs. “These Oklahoma companies are open for business and ready to grow."

The additional $300-a-week federal supplement, along with pandemic unemployment assistance for gig workers and contractors, will end June 26, Stitt said. About 90,000 Oklahomans currently receive the additional benefit, according to the Oklahoma Employment Security Commission.

Oklahoma is just the latest state to end the extra benefits.

Chad Warmington, the head of The State Chamber, an association of businesses and industries in Oklahoma, said many of his members complain that some unemployed workers are making more in unemployment benefits than they would at a job.

“We need the government to get out of the way and stop disincentivizing work," Warmington said.

The announcement was bad news for Gilbert Cruz and his wife, Marrissa Enloe-Cruz, whose graphic design company in Tulsa has essentially been shuttered since business tanked after the pandemic. The two, who both receive the extra $300 benefit, said they're not sure what they're going to do, especially since they're uneasy about sending their 7-year-old son back to school before being vaccinated.

“It's going to mean picking and choosing what bills to pay, or getting behind on things," Enloe-Cruz said. “It will mean whether or not we're able to put food on the table."

Democrats in the Oklahoma Legislature quickly panned Stitt's idea, which comes on the heels of an announcement by Stitt and Republican legislative leaders that they plan to reduce the state's corporate and top individual income tax rate.

“This reality has made it clear that the number one priority of the GOP is to remove money and benefits from working Oklahomans and increase the profitability of corporations and their out-of-state shareholders," House Minority Leader Rep. Emily Virgin, D-Norman, said in a statement.