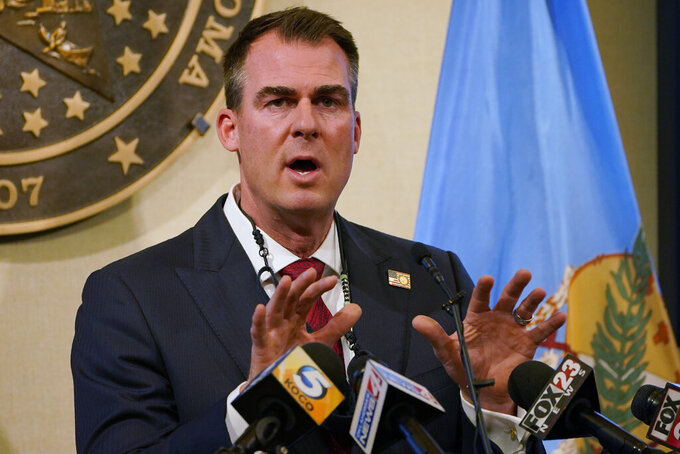 FILE - In this Monday, Nov. 16, 2020, file photo, Oklahoma Gov. Kevin Stitt speaks during a news conference in Oklahoma City. A much-anticipated Medicaid expansion is coming to Oklahoma in 2021 after years of resistance from Republicans in the Legislature and the governor's office. (AP Photo/Sue Ogrocki, File)

OKLAHOMA CITY (AP) — Oklahoma Gov. Kevin Stitt on Tuesday announced a new policy that he said will allow more in-person classroom teaching at state schools that implement mask wearing requirements, despite the rising number of coronavirus cases in the state.

“Schools that enforce the use of masks will not have to quarantine potential exposures (of students and teachers) unless they’re showing symptoms” of the virus, Stitt said.

Stitt cited a recent American Academy of Pediatrics study in North Carolina found 32 in-school transmissions of the virus among 773 COVID-19 cases at schools that followed safety procedures that include mask wearing, social distancing and frequent hand-washing.

Local school district decisions are made by the district's school board, and Stitt said he supports local control.

“Decisions about schools should be made by parents at the dinner table, not at a union hall by people with their own agenda," Stitt said.

“The governor and his team have many of the same values as the educators who make up the OEA. We want what’s best for kids," Priest said in a statement. "In-person learning is best for teachers and students ... the governor says schools are safe, but what is he doing to ensure that? He calls for no quarantining when there is a mask policy but won’t demand strong mask policies."

Stitt has resisted a statewide mask mandate, saying he doesn’t believe one is enforceable, but has encouraged residents to wear masks in public.

“While we all agree that in-person learning is the best way for children to learn, this policy doesn’t go far enough to ensure the safety of teachers, students, and staff,” said Rep. Jacob Rosencrants. "I urge the governor to call for a mask mandate, which is proven to be the best way to mitigate the spread of this virus, inside and outside of our schools.”

The state Department of Health on Tuesday reported 1,902 people hospitalized statewide with the virus, 24 fewer than reported Monday, in addition to 337,457 total cases and 2,804 deaths since the pandemic began.

Oklahoma ranked fourth in the nation Tuesday in the number of new cases per capita with 1,335.5 per 100,000 residents, according to data from Johns Hopkins University.