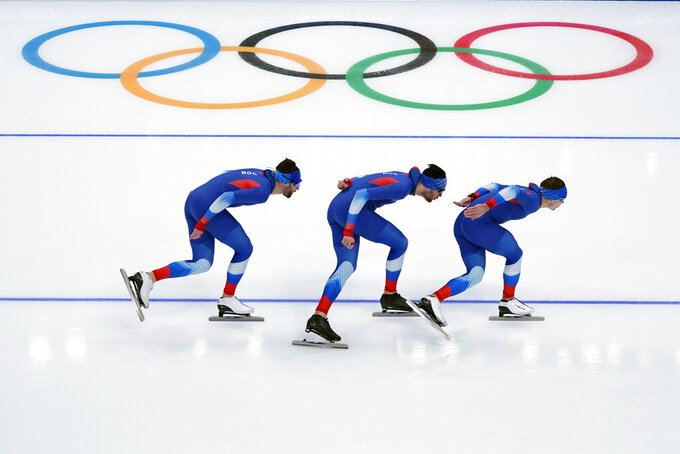 BEIJING (AP) — Alongside the daily collection of coronavirus samples, the athletes at the Beijing Olympics also have to contend with the usual doping tests — both in and out of competition.

The 2,900 or so competitors at the Winter Games have to make themselves available for unannounced doping control visits, putting them at greater risk of catching COVID-19 and possibly ruling them out of their event.

The International Testing Agency, which oversees sample collection at the Olympics, said Wednesday the daily tests, which everyone in the Olympic bubble must do, add extra psychological weight and uncertainty.

“There is a lot of attention when they go through the doping control process to go through all the COVID measures,” said Matteo Vallini, the ITA head of testing. “It puts them under pressure.”

The ITA, which designed the Olympic athlete testing, and World Anti-Doping Agency, which oversees the rules and the testing laboratory in Beijing, detailed their plans on the first day of competition, two days before the opening ceremony.

The wave of COVID-19 cases caused by the recent omicron variant has added to the ITA’s work.

Late and unpredictable team selections because of athletes testing positive meant their replacements were less of a priority in pre-Olympic testing plans.

The agency said Wednesday it still hit a target of about 80% collected of the 5,400 samples recommended to sports bodies.

The ITA and WADA draw confidence in hoping for a clean Olympics after more tests were done on athletes training in 2021 away from their competitions than in the last pre-pandemic year of 2019.

There were only four positive doping tests at the 2018 Pyeongchang Olympics, though all samples taken four years ago are in storage. They can be re-analyzed until 2028 if new testing methods or intelligence emerge.

This year's Olympics are likely the last where Russian athletes are not allowed to compete under their country’s name and without its flag and anthem.

In Beijing, as at the Summer Games in Tokyo six months ago, they will officially represent ROC and gold medalists will hear an excerpt from a Tchaikovsky piano concerto while standing on the podium.

Those World Anti-Doping Agency sanctions expire in December, two years after being imposed by the Court of Arbitration for Sport.

“The chapter is coming to an end,” WADA director general Olivier Niggli said Wednesday. “We are still remaining very vigilant.”

WADA’s case was against the Russian anti-doping agency, known as RUSADA. A key step to re-establishing it in international sports was electing a new leader two months ago.

“We were very pleased with that,” Niggli said of the process to appoint Veronika Loginova, who used to work for Russia’s sports ministry. “We certainly at the moment think that RUSADA is operating independently and we see no sign of undue interference.”

There are still pending disciplinary cases for sports governing bodies related to the 2014 Sochi Olympics using evidence gathered from the Moscow testing laboratory.

“There are still quite a number of them that are (not) dealt with,” Niggli said.

The 212-member Russian team has been the most tested in the pre-Olympic program.

The WADA-accredited laboratory at Beijing Sports University will analyze about 2,900 blood and urine samples during the Olympics.

It’s a different lab from the one in the city that had past issues with Olympic and pre-Olympic testing.

Errors during the 2008 Beijing Olympics at the National Anti-Doping Laboratory led to two hammer throwers from Belarus regaining their medals at CAS after being disqualified for testing positive for testosterone.

In 2016, WADA shut down the same lab for the four months prior to the Rio de Janeiro Olympics for mistakes in analyzing samples.

Now, the lab is part of a university instead of China's anti-doping agency — a situation Niggli said “is always better because we like labs to be involved in research.”

“They have progressed a lot. We have no particular worries with the lab,” he said.

Niggli is sure there can be no repeat of the systematic sample-swapping in Sochi’s lab.

“The situation is different," he said. "There is a lot of safeguards in there.”