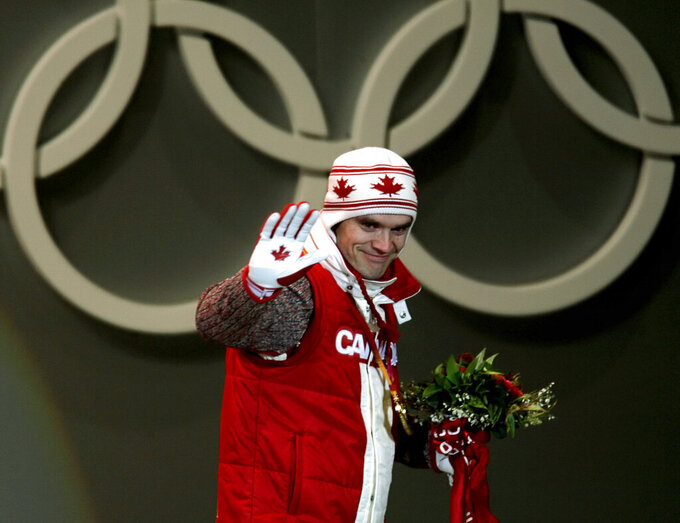 FILE - Canada's Duff Gibson celebrates his gold medal during the ceremony for the men's Skeleton competition at the Turin 2006 Winter Olympic Games in Turin, Italy, Feb 18, 2006. Gibson has published a book called “The Tao of Sport” in which he details his mental approach and explains why he thinks that is the difference-maker for elite athletes. (AP Photo/Domenico Stinellis, File)

BEIJING (AP) — It took Duff Gibson many years to become an Olympic champion.

It took him more years to explain the methodology behind that win.

Gibson, who became Canada’s oldest individual Winter Olympics gold medalist when he captured the men’s skeleton title at the 2006 Turin Games, has published a book called “The Tao of Sport” in which he details his mental approach and explains why he thinks that is the difference maker for elite athletes.

“It’s cliché to say ‘follow your bliss’ or ‘follow your passion,’ but I started writing, an hour or two at a time, something I thought was worth writing down, 100 times over a few decades,” Gibson said. “And when I didn’t have anything to do with high-performance sport anymore, I thought it was such a shame that I would have dedicated so many years of my life to being obsessed with sports and really interested in the mental aspects of it and not passed it along somehow.”

With that, the book he didn’t even originally realize he was writing was born.

The book came out in September, just in time for the start of the Olympic sliding season. There have been three Olympic men’s skeleton champions since Gibson — Jon Montgomery of Canada won in 2010, Alexander Tretiakov of Russia won in 2014 and Yun Sungbin of South Korea prevailed in 2018. The leader entering Friday’s final two runs of the men's event at the Beijing Games is Christopher Grotheer of Germany.

None of those sliders has a story like Gibson’s: He was coming into the Turin Games off three World Cup races where he averaged only a ninth-place finish. He was two months removed from the death of his father. He was 39; people that age aren’t supposed to win Olympic gold medals. He won the gold and never got on a sled again after that night in Italy.

But Gibson — whose real career is firefighting — does believe he has plenty of parallels with those sliders.

“The bottom line is that certain mental characteristics are just too common among elite performers for it not to be related,” Gibson wrote. “This is why I chose Tao for a title, a Chinese word which roughly translates to ‘path' or ‘way of being.' We have many different paths, but there seems to be a common way of being.”

His target audience is, frankly, broad. Olympians, he believes, could learn from what he writes. But Gibson also has been passionate about working with children as a coach and mentor, and he tried to write his story in a way that would allow parents and those who coach kids to easily apply what he’s saying.

“It’s something to pass along,” Gibson said. “And I believe there are certain lessons that you have to learn yourself. But at least this information is all in one spot. It may make you think along certain lines and get you where you want to go a little bit quicker, maybe. That’s what I’m hoping for.”