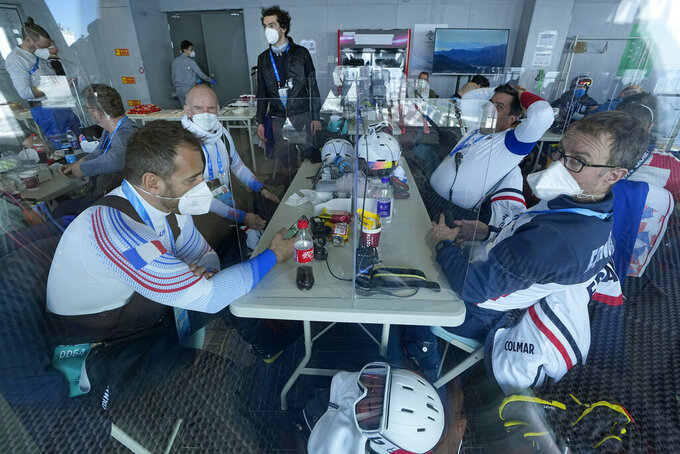 Ski racers wait in the athletes lounge near the top of the course during a delay in the start of the men's downhill due to high winds at the 2022 Winter Olympics, Sunday, Feb. 6, 2022, in the Yanqing district of Beijing. (AP Photo/Robert F. Bukaty)

What did Bennett do through three hours of delays until a final “to race or not to race” decision arrived Sunday? Study video of the slope? Think about how best to attack the snow? Check on his equipment? No, the 6-foot-7 mustachioed American was otherwise occupied — keeping tabs on the scene back home in Tahoe City, California.

“There was like 100 of my closest friends in my house with a keg. They’re having the Beer Olympics and they’re having a huge watch party going,” the 29-year-old Bennett, who won a World Cup downhill at Val Gardena, Italy, in December, said with a laugh at the bottom of the hill after word came of the postponement. “They’re going to have to recuperate after the hangover and do it again tomorrow.”

Everyone must “do it again tomorrow” at the Yanqing Alpine Skiing Center, which now will host the men’s downhill Monday, provided the wind subsides. This sort of scheduling switch is an inevitable part of Alpine skiing, especially when it comes to the downhill, an event so speedy and dangerous to begin with that it’s the only one where athletes usually are given three opportunities to take practice runs before a race.

“I’ve been a downhiller for my whole career and this is part of the sport,” said Travis Ganong, a 33-year-old American who was fifth in the downhill at the 2014 Sochi Olympics. “We’ve gotten good at this: The Waiting Game.”

Happened repeatedly at the 2018 Pyeongchang Olympics, where the race plan kept getting shuffled, also because of wind.

More than a quarter of the speed races — downhill or super-G — so far during the current World Cup season were moved from their original dates on the schedule because of weather. At least one was moved twice.

“In the the sport of downhill, it’s not that uncommon to have that happen,” said Forest Carey, the head men’s coach for the U.S. ski team, “so they’re accustomed to it.”

Still, dealing with postponements for a once-every-four-years — or, in some cases, once-in-a-lifetime — chance at a medal and glory could be difficult to navigate, the stuff of pins and needles and high stress.

So Kjetil Jansrud, a 36-year-old Norwegian who already owns five Olympic medals, played cards on what he called “one of the more normal downhill days.”

In the athletes’ lounge near the top of the course, some ate a snack. Others chatted with fellow skiers. The U.S. team tweeted a photo of Ryan Cochran-Siegle laying on the ground for some shut-eye.

“We just have to stay patient,” said Aleksander Aamodt Kilde, the 29-year-old Norwegian who is dating American superstar Mikaela Shiffrin and is currently leading the World Cup standings in downhill and super-G.

Part of the key, racers say, is not letting the tick-tick-tick of the clock wear on you, not expending too much psychological strength when there really is nothing to be done.

“You’ve got to try to stay focused and try to stay mentally there, but also you have to turn it off, because if you’re always focused the whole day, then it’s really hard to keep your energy up. You use all this adrenaline and it’s gone by race time,” Ganong said before he schussed off down the slope. “Now I need to go get some wind in my face, and just kind of connect with the mountain again, get some snow under my feet and just kind of reset.”

All in all, Bennett found Sunday a bit exhausting, even without a race.

“Once one delay happens, and then another delay happens, it’s easy to lose it mentally. So I was actually just staying with it all day. That’s tiring,” Bennett said. “We’ll just get a good night’s rest and go again tomorrow.”