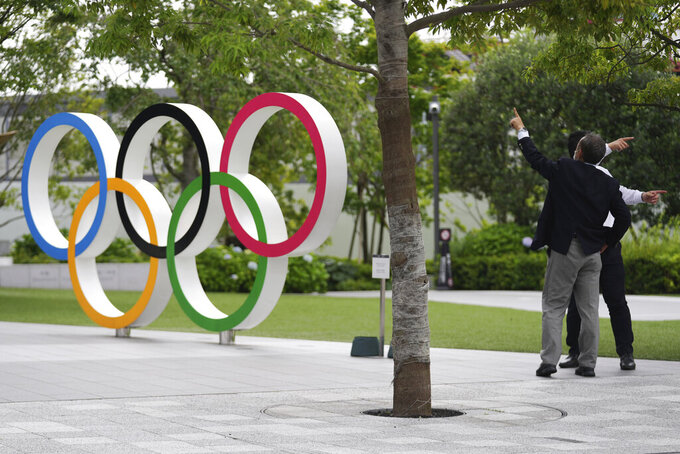 LAUSANNE, Switzerland (AP) — As public opinion in Japan turns against the pandemic-hit Tokyo Olympics, a book published Thursday by a long-time IOC insider details how calls for cancellation are now a part of organizing a modern games.

Fears of the zika virus menaced the 2016 Rio de Janeiro Olympics and nuclear diplomacy on the Korean peninsula was a risk ahead of the 2018 Winter Games in Pyeongchang, Michael Payne writes in his unofficial and irreverent Olympic history “Toon In!”

Payne recounts how both also faced existential threats during the games — because of bad management in Rio and a Russian hack of the organizers’ operating systems in South Korea.

The adversity and late glitches with many host cities has made the International Olympic Committee resilient to prepare for Tokyo’s opening on July 23, Payne said.

“If you have been inside the IOC for a few years you begin to understand the problems or challenges that would crash a normal company or organization,” he said in an interview at the Olympic Museum.

“You just stay focused and drive through to the future,” the former IOC marketing director added. “I think in the end the (Tokyo) games will be remembered for the great sporting performances.”

Public opinion in Japan currently has between 50% and 80% of respondents wanting to cancel the games. A state of emergency has been extended in Tokyo and other regions to curb COVID-19 infections and a slow vaccine rollout means elderly people won't be inoculated until the end of July.

About 11,000 Olympic athletes from more than 200 countries are due in Tokyo, with tens of thousands more sports officials and media arriving. All must follow strict health protocols and limit contact with Japanese residents.

Still, Payne said the Olympic brand would strengthen because “people will be generally relieved to see the world coming together.”

His book was created as a personal lockdown project in Switzerland last year.

More than 1,200 Olympic-themed cartoons published over decades in newspapers and magazines worldwide are included. About 360 cartoonists were tracked down to give permission to use their work.

“If I had understood it from the beginning I might not have gone on,” Payne said.

The result is a behind-the-scenes telling of the modern Olympics in a weighty, 500-page coffee table book. The cover image was created by Los Angeles Times cartoonist Jim Thompson.

The book is peppered with Payne's stories giving context to satirical images about boycotts and doping controversies, world leaders and hosting bid campaigns.

In Rio, the mismanagement of local organizers left the games “on the brink of catastrophic failure every day,” Payne writes.

The “Olympic Destroyer” hack during the Pyeongchang opening ceremony was traced to Russian intelligence services disguised to seem to have come from North Korea.

Payne praised Korean ingenuity to “rebuild the games’ tech system overnight so the competitions could start the next morning.”

Although the 2014 Sochi Olympics are infamous for Russian doping, Payne tells a lighter story of officials wanting to make the airport seem more lively when an IOC inspection team arrived.

Hundreds of actors were hired to appear as airport staff and travelers when the Olympic delegation passed through to visit the city and region that was getting a $50 billion makeover for the Winter Games, he said.

Sales of the book and auctions of cartoon prints will raise money for four charities: Back Up Trust, Cartooning for Peace, Peace and Sport, and Yunus Sports Hub.