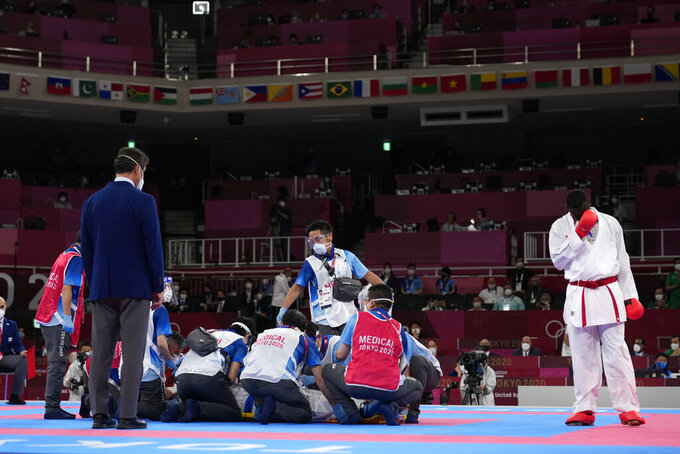 Tareg Hamedi of Saudi Arabia, right, reacts as medical personnel attend to Sajad Ganjzadeh of Iran after he was injured in their men's kumite +75kg gold medal bout for karate at the 2020 Summer Olympics, Saturday, Aug. 7, 2021, in Tokyo, Japan. (AP Photo/Vincent Thian)

TOKYO (AP) — The final bout of karate's Olympic debut seemed to have everything that makes combat sports so fascinating, right down to an incredible ending that should have made fans hungry for more of a martial art fighting for a place on future Olympic programs.

Instead, the gold medal match in men's over-75 kilogram kumite ended with a messy, confusing penalty for a kick that was apparently too spectacular for karate.

Hamedi built a lead in the opening minute before launching the spectacular final strike of the Tokyo tournament, connecting exquisitely on a pure left-footed kick to Ganjzadeh's head and upper body. Hamedi launched the Iranian champion backward and left him unconscious on the tatami, his eyes staring vacantly upward.

Hamedi did a celebratory hop and let loose with a scream after apparently winning the first gold medal in Saudi Arabia's entire Olympic history.

It was a cinematic end to the biggest international showcase in the competitive history of karate, which fought for 50 years to get on the Olympic stage.

And then the judges conferred, and they disqualified Hamedi for a hansoku — a serious violation of the rules.

Although the officials didn’t immediately explain their decision publicly, karatekas are not supposed to follow through fully on their strikes in this Olympic version of karate. Highlight-reel strikes that would make mixed martial artists or boxers very rich are considered too dangerous for this sport.

Instead of making history, the 23-year-old Hamedi left the mat in tears. Later, he responded with the maturity and discipline expected from great karatekas.

“If you ask me if I agree or not, I disagree, of course, because I love the gold medal,” Hamedi said through a translator. “But I am satisfied with the level of performance I gave, and I accept their decision. I don't have any objection. I think I played well. That's all I can say.”

Ganjzadeh learned he was an Olympic champion after he woke up backstage, and he returned to accept his gold medal.

“I regret that the final match had to happen like this,” Ganjzadeh said.

Hamedi’s silver medal still was only the second ever won by Saudi Arabia. He shared a warm hug and a joint celebration with Ganjzadeh atop the medal podium in another sterling display of sportsmanship.

Nearly every competitor at the Budokan over the three-day tournament was asked about the future of their sport — and with good reason. Karate is not on the Olympic program in Paris, but karate officials fervently believed this Tokyo showcase would demonstrate why the sport deserves a permanent place soon.

Much of the tournament did exactly that. There were numerous exciting bouts that showed off the kumite competitors' striking skills, and the kata competition was captivating with its primal demonstration of karate form — an exercise that fits nicely with everything from gymnastics floor exercises to equestrian dressage in the Olympic playbook.

But when the final bout ended with an officiating decision that was guaranteed to baffle or infuriate all but the most hard-core karate aficionados, the sport's future in front of a wider audience didn't seem quite so promising.

If karate doesn't want Hamedi's kick in its sport, it would be understandable if many fans don't want to see more karate.

Competitive karate's detractors have long compared it to a violent game of tag that can be boring for long stretches. There was plenty of action at the Budokan, but also plenty of cagey bouts in which neither opponent risked much.

Feryal Abdelaziz won the eighth gold medal in Egypt's Olympic history moments before Hamedi and Ganjzadeh fought, beating Azerbaijan's Irina Zaretska 2:0 in women's over-60 kilograms on a pair of late yukos after 2 1/2 scoreless minutes. The bout was compelling, but probably only for people who understood the stakes and the tactics involved.

It's too soon to tell whether the IOC will be among those who liked karate enough in Tokyo to want to see it again.

“I hope people will change their mind, and karate will be included in the next Olympic Games,” Abdelaziz said. “There are millions of people around the world who practice karate, and I think it really deserves to be included. We’ve shown these at Games how beautiful it is, and we've demonstrated the strength of our competition. I think we deserve a future in the Olympics.”