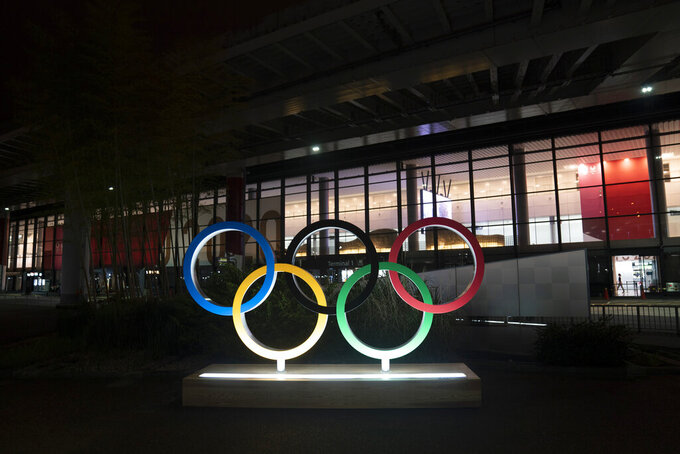 FILE - In this Saturday, July 10, 2021, file photo, the Olympic rings are illuminated outside the Narita International Airport prior to the 2020 Summer Olympics near Tokyo. The Olympic corporate sponsorship program has been a key part of the Olympic experience since it began in 1985. But all that magic from the Olympic sponsorship is being undermined because of the virus. (AP Photo/Jae C. Hong, File)

NEW YORK (AP) — Screaming fans won't be the only thing missing from this year's Olympic Games in Tokyo. Behind the scenes, there won't much schmoozing for corporate sponsors either, thanks to the pandemic.

The corporate sponsorship program has been a key part of the Olympic experience since it began in 1985. More than a dozen or so names like Coca-Cola and Proctor & Gamble pay millions of dollars in each four-year cycle on sponsorship and marketing programs that includes wining and dining athletes, top employees and key clients at Olympic events.

But all that networking opportunity has been undermined because of the virus. Brands were already dealing with uncertainty regarding the fate of the Tokyo Olympics, which had been delayed from 2020. The games have now turned into a mostly TV-event after the Japanese government put Tokyo under a COVID-19 state of emergency because of rising new infections and the highly contagious delta variant.

Rick Burton, professor of sport management at Syracuse University, said worldwide sponsors typically use the event to entertain dignitaries from other countries where they hope to pursue a business venture as well as clients with whom they hope to cinch deals or deepen relationships.

“There are so few opportunities to take someone to somewhere else in the world—it’s an extravaganza,” said Burton, who served as the chief marketing officer of the U.S. Olympic Committee for the 2008 Beijing games. “I can take you to an NFL game or an NBA game, but it isn’t as big as the Olympics.”

But even with a muted Tokyo Olympics, corporate sponsors still see a golden opportunity to market their brand with such trademark symbols as the torch.

“The Olympic brand is so strong in the hearts and minds of people around the world,” said Rob Prazmark, founder of 21 Marketing, which has helped the International Olympic Committee evaluate its global sponsorship program and has brokered more than $3 billion worth of Olympic sponsorship deals. ”(The sponsors) are in it for the long haul. They’re not dealing with it as a one-and-done thing. They are viewing it as an asset for their company long term.”

Experts believe corporate sponsors will be able to salvage networking opportunities by hosting their own parties or reinvesting more money in social media. Tony Pace, the former chief marketing officer of Subway who now has his own marketing firm, thinks sponsors will likely hold viewing parties with former Olympic athletes — in person or virtually — or be creative with current Olympic athletes by perhaps using social media or remote conferencing for private events with their clients.

Many of the worldwide sponsors either declined to comment or didn’t respond to queries from The Associated Press on what events they had planned. Bridgestone Corp. the world’s largest tire and rubber company and one of the worldwide Olympic sponsors, would only say in a statement that it isn’t creating any events outside of Tokyo but focusing its efforts in its marketing campaigns on broadcast, digital and social media as well as “supporting its athletes along the journey."

Prazmark estimates the worldwide sponsors spend on average $400 million for each four-year cycle, which gives them marketing rights to one summer and one winter Olympics. The worldwide partner program accounts for roughly 20% of the International Olympic Committee's revenue, with the rest largely coming from TV rights, according to the IOC. And athletes often sign separate pacts for themselves.

Coca-Cola, the longest standing Olympic partner has exclusivity over non-alcoholic beverages. The funding provides direct support for the training of Olympic athletes and hopefuls globally. That's in addition to financing global marketing campaigns and creating the interactive experiences on site. Experts say the majority of the commitment goes toward advertising on all platforms.

Prazmark and others say it isn't the first time that corporate sponsorship was undermined at an Olympic event. Sponsors reduced their hospitality programs during the 2004 Olympics in Greece because of fears of terrorism that lingered in the aftermath of the Sept. 11, 2001 terrorist attacks, Prazmark recalls.

But the pandemic creates so many different challenges for corporate sponsors, including how empty seats at the Olympic Games will affect TV ratings and how much these brands could suffer if the Olympics become a super spreader event.

Burton believes there won't be negative consequences for sponsors since no one would blame them if the Olympics Games turns into a super spreader. John Matthew Sweeney, professor of sports communication at the University of North Carolina’s School of Journalism and Media, on the other hand, is not so sure.

“The environment surrounding this event is so unusual and turbulent that a brand could feel like its effort is a disaster one day and a triumph the next," he noted.

For many of them, however, it's still worth it to be at the games. Pace, who worked with his Coca-Cola client to sponsor the torch relay for the 1996 Atlanta games and has been involved in nearly every Olympics for the past three decades, says having clients be part of the physical event has intangible benefits. He remembers the day Michael Johnson, sporting custom-made golden spikes, electrified the audience when he smashed the world record for the 200-meter running competition during the 1996 Atlanta games. The day after, Coca-Cola hastily threw a meet-and-greet event at the Olympic Village for some of its bottlers and other business partners.

“The people who were there felt like they had a gift," he said. “Everybody wants to talk about business decisions and purchase decisions as being logical. But that doesn’t give enough weight to the emotional element. When they are part of those kind of moments, that’s why they have a preference for a brand or a business.”