Olympic spotlight back on China for a COVID-tinged Games 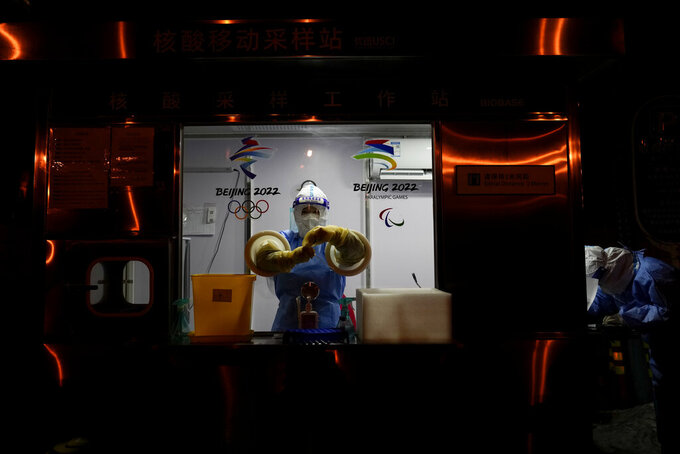 BEIJING (AP) — Long before the global pandemic upended sports and the world in general, the 2022 Winter Olympics faced unsettling problems.

It started with the fact that hardly anybody wanted to host them.

Beijing ended up solving that problem, but only after four European cities thought about it and dropped out, mostly because of expense and lack of public support. In the end, it was a race between two authoritarian countries. The IOC narrowly chose China's capital and its mostly bone-dry surrounding mountains over a bid from Kazakhstan. “It really is a safe choice,” IOC President Thomas Bach said after the balloting.

Some seven years after that fateful vote, the world will find out if Bach was right. Starting with Friday's opening ceremony at the lattice-ribboned Bird's Nest Stadium, the spotlight will be trained on China, a country with human-rights record that troubles many, an authoritarian government and a “zero-tolerance” policy when it comes to COVID. It will be trained on what figures to be the most closed-off, tightly controlled, hard-to-navigate Olympics in history.

The build-up has turned the idea of “making it to the Games” into as much of a logistical and sometimes moral conundrum as a competitive one.

"This is one where you can do your absolute best but you kind of have to juggle your sanity and being able to perform at the Olympics, and not lose your mind beforehand,” U.S. moguls skier Hannah Soar said.

To be sure, if the 2 1/2 weeks of skiing, skating and sliding turn out to be like most Olympics before it, then it will be the athletes such as Hannah Soar — and snowboarder Chloe Kim, skier Mikaela Shiffrin and Norway's cross country champion Johannes Hoesflot Klaebo, to name a few — that we'll remember most.

But there has been so much to process in the lead-up. And there's no pretending that the International Olympic Committee's decision to bring its biggest show to a country that is facing ever-increasing scorn from democracies in the West — a country that has been on a virtual lockdown since shortly after it sprouted the world's first cases of COVID-19 more than two years ago — does not bring with it some stark considerations:

— Human Rights. Led by the United States, a number of Western democratic countries are staging a diplomatic boycott of the Games to protest what the U.S. and human-rights groups have called the genocide of some 1 million Uyghurs in China's far western Xinjiang province.

— Dignitaries won’t attend, but athletes still will. German slider Natalie Geisenberger was among those who considered not coming, but then decided to make the journey, along with some 2,900 athletes from around 90 countries. Her conclusion: "We athletes have absolutely nothing to do with the decision to award the Olympic Games to Beijing — the (IOC) decides and we athletes are presented with a fait accompli.”

— Health and safety. To try to prevent the spread of COVID, China will run these Olympics in a “closed-loop” system. All participants will be tested daily. None will be allowed out of the hotels and venues that are cordoned off from the city and mountains where the Games will take place.

Participants will be placed in isolation if they test positive, and the stakes of a system that has not been clearly spelled out to everyone were on display when Belgian skeleton racer Kim Meylemans turned to social media Thursday and gave a tearful explanation of her situation.

— Tennis player Peng Shuai. Her plight touches on almost all the sore points involved in bringing these games to this country: The Chinese champion's safety has been in question since she accused a former high-ranking government official of sexually assaulting her. Some of the few signs that she might be OK have come courtesy of the IOC, which has shown pictures of Bach in video meetings with Peng, The IOC has indicated it will meet with Peng during the Olympics, but its previous meetings have brought forth as many questions as answers.

— Cybersecurity. Many countries are advising their athletes to leave their cell phones and laptops home lest they be compromised by the Chinese government. Earlier this week, the head of the FBI in the U.S. said the Chinese government's hacking operations are “more brazen” than ever before.

— Russia. President Vladimir Putin is expected to attend the opening ceremony in what some will view as an audacious bit of politicking on two fronts. With tensions escalating on the Ukraine border, this conjures memories of the 2014 Olympics in Putin's home country, during which Russia invaded and took over the Ukrainian territory of Crimea. It is also viewed by many as a slap in the face to anti-doping regulators who tried, without great success, to sanction the country for scandals of the past decade.

— The environment. The mountains hosting action sports and cross country skiing are about 150 miles from the Gobi Desert; they average less than a foot of snow a year. Though snowmaking is nothing new at Olympic venues, this is touted as the first Games to rely completely on artificial snow. To do it, the country had to build massive irrigations systems and will use up to 800 Olympic-sized swimming pools' worth of water. It brings into question Beijing's claims that these Games will be carbon neutral.

Oh, and about the sports — Norway is a decent bet to win the most medals, in part on the strength of a deep roster of biathletes and cross country skiers. Russia, officially called “Russian Olympic Committee" because of doping sanctions, could challenge. Its men's hockey team is favored after the NHL, with the omicron variant raging in North America, decided not to shut down its season to send players to the Olympics.

All in all, this is quite a different look for China from the last time the Olympics descended. That was in 2008, and the Summer Olympics were viewed as the world's chance to finally get to know a global behemoth.

More than attempting to put on a good face this time, China is doing things by its own rules. COVID restrictions offer a convenient justification for not letting journalists wander the country to report on what's really going on in this land of 1.4 billion.

“There are two audiences for this,” said David Bachman, an expert on China who teaches at University of Washington. "There's the international audience. And it's also going to be important to impress their own people with how efficiently the Games are run.”

Where Russia spent a record $51 billion on the 2014 Sochi Winter Games, and South Korea looked comparatively frugal by only spending $13 billion, part of China's pitch was that it wouldn't drop nearly that much on what will be the third straight Olympics held in Asia.

It is repurposing the opulent Bird's Nest, built for the 2008 Games, as the stage for its opening ceremony. It reclaimed an old steel mill to build a big air jumping stadium for skiers and snowboarders. Improvements in the mountains came thanks to the Olympics, and China is banking on a burst of new skiers and snowboarders to follow.

Beijing organizers have put out a budget of around $3.9 billion, but with no watchdogs tracking the money, the real cost is anyone's guess. One estimate said the true cost could be as much as 10 times that original budget.

The money goes for what the IOC touts as a much-needed 17-day break from strife and politics — a break that allows a worldwide audience to revel in the glow of athletic accomplishment. NBC, for one, pays billions to pipe the action to the United States. But this year, its big-name commentators will be back home, calling the action remotely.

It's one of hundreds of concessions made to the virus that first cropped up in China some 26 months ago, and has slapped an indelible imprint on the way the country must run these Games.

Time will tell if all the trouble was worth it. The main reason American snowboarder Jamie Anderson decided to come: "At least for this one time in life,” she said, “the world comes together over sports.”