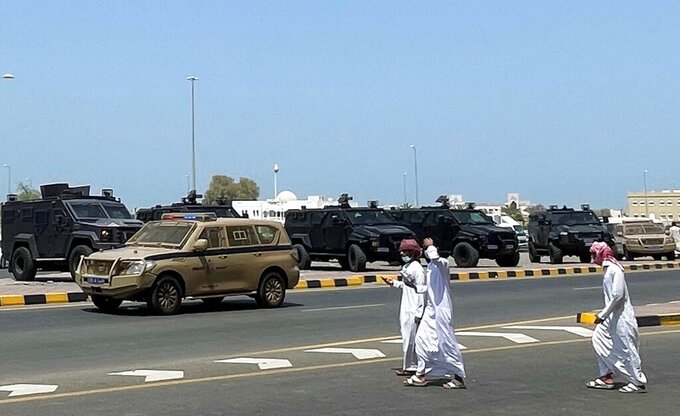 People walk near riot police cars in Sohar, Oman, Tuesday, May 25, 2021. On Tuesday, dozens of protesters angry over firings and the poor economy of Oman marched in Sohar, a city some 200 kilometers northwest of the capital, marking a third day of demonstrations in the typically subdued sultanate. (AP Photo)

It wasn't immediately clear what sparked the police action in Sohar, a city some 200 kilometers (125 miles) northwest of the capital, Muscat. Demonstrators had marched and collected around an overpass that has been a rallying point.

Activists posted videos online showing some demonstrators responding by throwing rocks after police fired the tear gas. They described the demonstrations as peaceful, though videos showed they had shut down a major thoroughfare in the city.

Hours later, the state-run Oman News Agency alleged that some protesters had been “assaulting policemen, passers-by, drivers and blocking public and subsidiary roads” in Sohar. It also accused protesters of “attacking public and private property,” while saying many others had urged fellow demonstrators to be peaceful.

The agency added that the Royal Oman Police had “fulfilled its duty to maintain security, public order and the safety of citizens and residents, and not to disrupt their interests and freedoms," without elaborating on what that meant. The Royal Oman Police on Twitter denied anyone had been killed in the confrontation and urged the public “not to circulate false news.”

Demonstrations have struck in recent days across Oman, a nation on the eastern edge of the Arabian Peninsula. Oman already faced economic trouble with tens of billions of dollars of outstanding debts and trouble finding enough work for its young people. Then came the coronavirus pandemic and repeated lockdowns that followed, further depressing growth in this nation of 4.5 million people.

Activists say some demonstrators had been arrested during the days of protests across the country, something not yet acknowledged by police. While Oman’s tightly controlled media did not initially cover the protests, newspapers and websites began showing images of the demonstrations and airing interviews with those aggrieved over the last day.