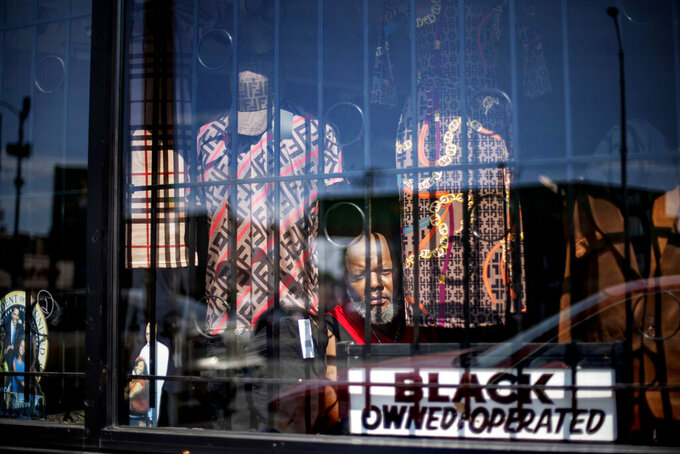 Ronald Cashaw looks out from the window of his clothing store, Just Kicking, in the Auburn Gresham neighborhood of Chicago, Saturday, Aug. 22, 2020. Blocked by security bars, looters smashed the front window of his store grabbed some clothing and ran away before Cashaw arrived. "I had tears in my eyes," says Cashaw. The looting was something new, and horrible. But in the nearly two decades Cashaw has served this community, financial problems have grown more devastating. (AP Photo/David Goldman)

CHICAGO (AP) — In harrowing moments, in the sobs of grieving mourners and the wail of incessant sirens, the crises of 2020 have played out painfully within a single Chicago community:

Patricia Frieson posted a hopeful Facebook message in late February when COVID-19 invaded her neighborhood: “Take care everyone,” she wrote.

Less than three weeks later, she was gone. Her death in Auburn Gresham, a Black community on the South Side of Chicago, was the first in Illinois from the coronavirus.

Ron Cashaw is a well-known shopkeeper in the same community. During one terrible weekend of violence, looters tried to break into his clothing store. He raced to stop them.

Teyonna Lofton faced her own crisis on a day when her joy turned to terror. After celebrating her high school graduation, she was shot while waiting to buy a soft drink.

In a chaotic year destined for the history books, Auburn Gresham has written its own grim chapter. The community has endured a deadly virus, economic misery and gun violence — a constant state of turmoil that mirrors the tumult afflicting much of urban America.

COVID-19 infections rose early and quickly in the community. Stores closed during a citywide lockdown. Protests erupted following the agonizingly public death of George Floyd. And when summer arrived, shootings surged in the 6th police district. Over three months, there were a shocking 175 victims.

“Forty-five years I’ve been here and never has it been as bad as it is right now in terms of hopelessness, anger and despair. Never,” says the Rev. Michael Pfleger at St. Sabina, a Catholic church that’s a community anchor.

For the Frieson family, the death of Patricia, a 61-year-old retired nurse with asthma and other health problems, turned into a double tragedy.

Her sister, Wanda Bailey, who was two years older, died nine days later from the virus. Both had recently attended a family gathering for Wanda’s birthday.

“My sisters never had a chance,” says Anthony Frieson, who also was infected but didn’t become seriously ill.

The coronavirus has ravaged Black people disproportionately across the country. In Chicago, one of the nation’s most segregated cities, about 43 percent of the virus’ victims have been Black – more than twice the number of white people.

State public health officials report more than 1,700 COVID-19 infections in ZIP code 60620, home of Auburn Gresham. In addition, there were 77 coronavirus deaths as of late August.

The community was one of Chicago’s early COVID-19 hot spots; city public health officials dispatched supplies, including masks and hand sanitizer. But it took several weeks to bring a testing site to the area.

Some expected the pandemic would keep people hunkered down in their homes, reducing gang tensions. But the shootings didn't stop. The flow of guns have been a persistent problem in Auburn Gresham. Last year, 1,149 guns were recovered from the 6th police district,

Teyonna Lofton's was one the many shooting survivors. In late spring, hours after the 18-year-old celebrated her high school graduation with a car parade, she was shot in the left arm while standing outside a gas station.

Now college is on hold as she undergoes therapy.

She's grateful for her survival. But she's frustrated, too, by a political system she believes favors the moneyed business interests and shortchanges the needs of her community, which doesn't have a hospital.

Police Commander Rahman Muhammad has seen a big shift since he began work in the 6th district 25 years ago -- the first of three tours -- when gun violence revolved around narcotics or another criminal enterprise.

Now, he says, social media is often the driving force behind many shootings. with gang rivals taunting each other online over petty matters that escalate into tragedy.

Muhammad also says solving crimes has become tougher because of “an erosion of trust between the police and the community.” Residents fear their own safety, and so are less inclined to cooperate.

Police had more than gangs to contend with this year. As protests spread nationwide calling for racial justice and against police brutality following George Floyd’s death, Auburn Gresham was fertile ground.

“I had tears in my eyes,” says Cashaw, whose clothing store, Just Kicking, was spared the worst damage. Looters couldn't get past security bars so they smashed the front window, grabbed some clothing and ran before Cashaw arrived.

He reopened the next day.

Carlos Nelson, head of the Greater Auburn Gresham group, is trying to convince looted and destroyed businesses to return. “We’ve been begging and pleading, ‘Help us rebuild,’” he says.

His organization recently won a highly competitive $10 million grant from the Pritzker Traubert Foundation that will be used to build a hub that will provide medical, dental and other healthy living services.

The project -- which will also be financed with $4 million in city funds -- will include an urban farm and an anaerobic digester, which converts food waste into clean energy.

For Betty Swanson, a block club president, it’s one more sign of the resilient community she’s lived in since 1964.

“When you’ve been knocked down so many times, there’s not too much that’s a blow to you,” she says. “We keep pushing on and plowing right along. So we don’t give up. We don’t quit. And we do come back.”