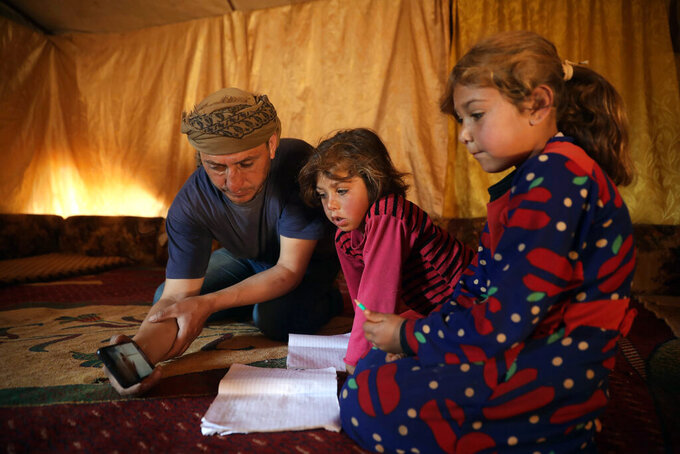 In this April 13, 2020 photo, Tariq al-Obeid, displaced from the eastern countryside of Idlib, Syria, shows a lesson for his children on a mobile phone in Kelly, a town in northern Idlib. Al-Obeid received the education material from a teacher on a private WhatsApp group. As the world moves online, the Syrians in opposition-held areas are too. In the time of coronavirus, the internet is becoming an educational tool, and one to salvage bonds essential for surviving the brutal conflict. (AP Photo/Ghaith Alsayed)

BEIRUT (AP) — Who got married? Who had a baby? Have we lost anyone?

Through crackling internet lines and jumpy connections, a group of Syrian students recently reunited after nearly two years, recreating their English language classes and their small community online from pockets of opposition-held areas.

In the age of the coronavirus, schools and universities across the world have rushed to switch to education online. In this corner of Syria, the move also brings together students separated by war, distance and technological hurdles.

The students spent much of the first lessons catching up, at times extending their Zoom call twice. One student said her brother was released after three years in government jails — rare good news in a civil war where tens of thousands are unaccounted for.

Some had babies, others got married or changed jobs. Many lost their homes or were displaced in Syrian government military offensives. The country's grinding war is now in its 10th year.

In one class, eight students reunited halfway into the Islamic holy month of Ramadan. They talked over internet connections that often broke mid-sentence. Walls visible in some screen backgrounds bore what appeared to be cracks from past bombings.

“This is the worst Ramadan,” said one of the students, Fatima Darwish, displaced in a government offensive on Aleppo province and forced to spend the holy month huddled in a strange new place, a village where she knows no one.

Her teachers offered sympathy, then reminded Darwish that countless others in the shrinking rebel-held enclave share her fate.

In another class last month, 19 students discussed coronavirus restrictions. One said people were not taking the pandemic seriously, seeing it just as “another wave of killing.” Another said it has not changed daily life because in rebel-held areas, people still feel as isolated from the world as before.

Before the pandemic, the general perception here was that online education was an expensive and impersonal experience. Now, that view is changing.

“Everyone is online. The idea of online courses changed in people’s minds," said Abdulkafi Alhamdo, a co-founder of the Institute of Language Studies, himself displaced in Idlib. “That is why we had the courage to do it.”

It's a family of sorts — especially for those who lost their own, he added.

Founded in the eastern, rebel-held half of the city of Aleppo in 2015, the institute relocated to Idlib the following year, after government forces recaptured all of Aleppo.

The school survived government offensives and rebel infighting but it was the distance that finally forced the shutdown. Alhamdo lived a two-hour drive from the school, a deadly trek in the war zone. The institute's co-founder, Wissam Zarqa, moved to Turkey to join his family and start graduate studies.

Resilient Syrians in rebel-held territory have overcome many obstacles in the country's civil war, pulling together to hold classes in underground shelters or moving schoolrooms between displacement camps.

The war-battered region has sporadic electricity and relies on satellite internet for communication.

Now, nearly 60% of the 500,000 enrolled students in northwestern Syria are estimated to have joined online education programs, said Layla Hasso of Hurras Network, a group facilitating virtual education in the region.

Last week, students lamented how the virus restrictions have dampened the Ramadan spirit — gone are the large family meals with many visiting relatives and friends, and the late-night communal prayers, so characteristic of the holy month.

They all agreed they miss one thing online classes can't replace: the handing out of sweets among themselves to celebrate marriages, newborns and other happy news.