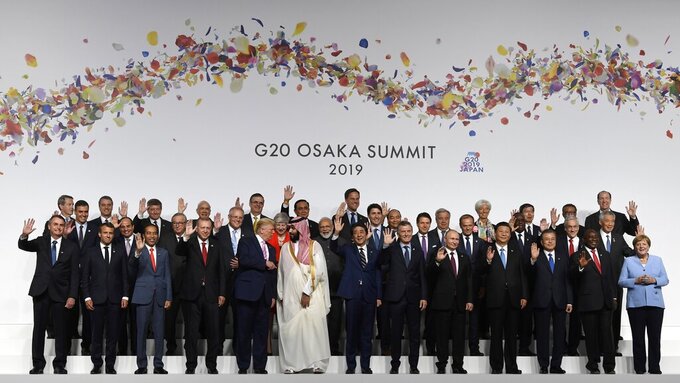 FILE - In this June 28, 2019, file photo, U.S. President Donald Trump talks with Saudi Arabia's Crown Prince Mohammed bin Salman during a group photo at the G-20 summit in Osaka, Japan. The Nov. 21-22, 2020, Group of 20 summit, hosted by Saudi Arabia, will be held online this year because of the coronavirus. The gathering of leaders of the world’s preeminent rich and developing nations will not be an opportunity for kings, presidents and prime ministers to conduct the intimate diplomacy of closed-door meetings or pose for memorable photo-ops. (AP Photo/Susan Walsh, File)

DUBAI, United Arab Emirates (AP) — This weekend’s summit of leaders from the Group of 20 stands out more for what it is not than for what it is.

Held online this year because of the coronavirus, the gathering of leaders of the world's preeminent rich and developing nations will not be an opportunity for kings, presidents and prime ministers to conduct the intimate diplomacy of closed-door meetings or pose for memorable photo-ops. Without red carpet arrivals, it will not be an occasion for its Saudi hosts to dazzle the world’s media.

And it is not expected to yield a globally unified response to the worst pandemic in decades. While billions of dollars have been pledged for medicines and vaccines, G-20 countries have mostly focused on securing their own supplies.

A virtual summit does spare Crown Prince Mohammed bin Salman the possibility that some leaders may have stood him up in Riyadh, two years after Western intelligence agencies said he bears ultimate responsibility for the killing of writer Jamal Khashoggi in Turkey by Saudi agents — a slaying he’s denied any involvement in. But an online meeting also deprives the Saudis of a media spectacle to tout their position in the world.

Beyond putting putting a kink in Saudis plans, the pandemic has offered the G-20 an opportunity to prove how such bodies can facilitate international cooperation in crises — but has also underscored their shortcomings.

The G-20 — whose member-countries represent around 85% of the world’s economic output and three-quarters of international trade — was founded in 1999 as a way for finance ministers and central bank governors to discuss the global economy.

In March, when border closures and lockdown orders to slow the spread of the virus affected well over a quarter of the world’s population, Saudi King Salman convened G-20 leaders virtually.

At the time, the recorded global death toll from the virus had just climbed past 22,000. G-20 leaders vowed to share information and the material needed for research, to exchange epidemiological and clinical data, and to strengthen health systems. They also promised to work together to increase funding for vaccine research.

Quick research and sharing of scientific information for the development of COVID-19 tests and vaccines has happened. The work on vaccines, which began only this year, may result in viable candidates soon.

But it’s arguable whether health systems have been strengthened; even in the wealthiest nations like the U.S. and those in Europe, hospitals have become overwhelmed, and testing and contact-tracing programs have struggled.

The Associated Press also found that China — a key G-20 member — was not entirely transparent with the World Health Organization in the initial stages of the pandemic, although many other nations have also not provided thorough details about their outbreaks.

The disease has now claimed more than 1.3 million lives, according to a count kept by Johns Hopkins University.

In a recent letter to G-20 leaders, U.N. Secretary-General Antonio Guterres said the world faces its biggest test since the Second World War.

“The pandemic must be a wake-up call to all leaders that division is a danger to everyone, and that prevention saves money and lives,” he wrote.

He commended the recent G-20 decision to offer the hardest-hit poor nations an extension on debt repayments, and in the most severe cases, possible debt write-offs. But he also urged the group to expand coverage to include vulnerable middle-income countries.

Aside from offering an opportunity for global cooperation, G-20 summits are also an occasion for host countries to seize the spotlight. Saudi Arabia’s turn at the rotating presidency for the first time has been an immense point of pride for the kingdom, and it has touted that role by using the G-20 logo as a backdrop for press briefings big and small.

That it was deprived of hosting in-person events may cut both ways. While the range of virtual G-20 meetings the Saudis organized throughout the year would have otherwise brought to Riyadh hundreds of influential delegates, they would have also courted controversy — as they did, even from afar.

The mayors of New York and London, for example, refused to participate in a G-20-related meeting on urban development, citing Saudi Arabia’s crackdown on human rights activists and its war in Yemen. Members of the U.S. Congress have called on the Trump administration to withdraw from the summit, and European Parliament members have issued similar calls to EU leaders.

It remains unclear whether U.S. President Donald Trump, preoccupied with challenging his election loss, will participate.

As it is, Prince Mohammed won't have to meet Turkey’s Recep Tayyip Erdogan, whose government apparently had the Saudi consulate in Istanbul bugged to apply pressure over Khashoggi’s slaying, or French President Emmanuel Macron, whose defense of caricatures of the Prophet Muhammad has sparked protests by Muslims.

“Hosting major events such as the G-20 not only affords the kingdom the image of a powerful, modern country and global economic power, but also draws international attention away from the reality of rights abuses that occur mere miles away,” Lina Al-Hathloul, whose sister, Loujain, has been imprisoned along with several other Saudi women’s rights advocates, wrote in a Washington Post column.

But David Rundell, a career U.S. diplomat with 15 years' experience in Saudi Arabia, said the kingdom’s message should be that isolation will not achieve the desired result — and engagement can.

“Saudi Arabia needs encouragement for its economic reforms, but also for its human rights record,” said Rundell at a Chatham House event.

While the online nature of this year's gathering may sap it of glitz, many have noted that what happens at such summits isn't always equal to the weightiness of world affairs anyway.

Former U.S. President Barack Obama poked fun at the dynamics of past summits in an interview this week with The Atlantic.

“You get to Congress and then you get to the G-20, and at each level, you have this expectation that things are going to be more refined, more sophisticated, more thoughtful, rigorous, selfless, and it turns out it’s all still like high school,” he said.