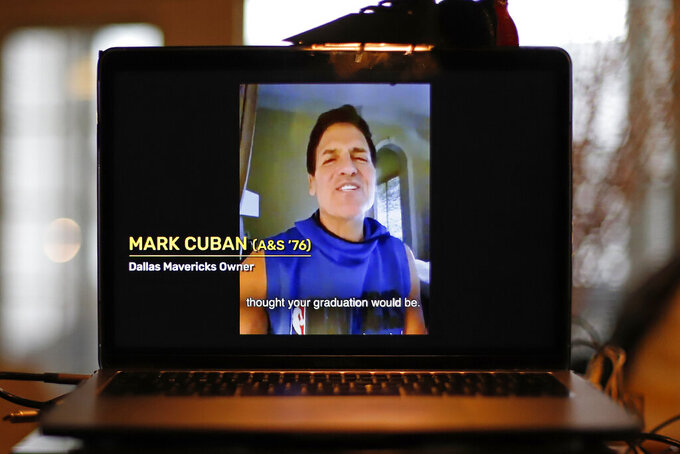 FILE - In this April 26, 2020, file photo, University of Pittsburgh graduate Dallas Mavericks owner Mark Cuban congratulates members of the Class of 2020 during a virtual commencement on a computer screen in Pittsburgh. As the coronavirus leaves colleges holding “virtual graduation” events online, many schools are recruiting famous figures to deliver speeches over their laptops instead of the lectern. (AP Photo/Gene J. Puskar, File)

This year's college graduates won’t get to take their triumphant walk across the stage. They won’t get to toss their caps amid a sea of classmates. Instead, they have to settle for online ceremonies while their diplomas are mailed home. But at least one aspect of the traditional graduation ceremony is being salvaged for the class of 2020: the celebrity keynote address.

As scores of U.S. colleges host virtual graduation ceremonies amid the coronavirus pandemic, many are recruiting famous figures to give commencement speeches over their laptops instead of the lectern. In the first weeks of graduation season, schools have landed speeches from big names including Tom Hanks, Pharrell Williams and Tom Brady. Others are promising appearances from comedians, authors, civil rights leaders and politicians.

At the same time, a growing number of companies are stepping in with their own star-studded events celebrating college graduates across the nation.

On Friday, Facebook is hosting a “Graduation 2020” event with commencement speeches from Oprah Winfrey, Awkwafina, Lil Nas X and Simone Biles, among others. YouTube is offering a “Dear Class of 2020” celebration headlined by Barack and Michelle Obama, with additional speeches from Lady Gaga, Nobel Prize winner Malala Yousafzai and the K-Pop supergroup BTS.

A separate online event will celebrate graduates at historically black colleges, with speeches from Barack Obama and a host of other stars.

It’s all meant to take the sting out of losing such a memorable moment. Schools across the U.S. started canceling or postponing traditional ceremonies in March, to the dismay of graduates who had hoped to celebrate years of hard work. In their addresses, some speakers have used the moment to offer a lesson on life's curve balls and the need to adapt.

In a video message for Texas A&M University's law school, actor Rainn Wilson told graduates he was sorry they couldn't share “big group hugs and high fives and kisses on the cheek.” But he also said students can learn from that disappointment.

“It may also teach a very valuable life lesson not to take anything for granted. To know that things can and will change all the time," Wilson said. “The world out there can be incredibly difficult and fraught, and plans change all the time."

Tom Hanks, who survived COVID-19, told graduates at Wright State University that their lives will forever be divided into time before and after the coronavirus pandemic, in the same way that past generations had their lives marked by wars.

“You have finished Wright State during the great reset, the great reboot,” Hanks said in a video message. “You chosen ones are going to form the new structures and define the new realities, and make the new world — the world after all that we have been through.”

Hanks’ message was delivered as a surprise to graduates at the Ohio school. Other colleges have similarly kept quiet about their celebrity speeches until they were shared online, including at Virginia’s Norfolk State University, which tapped singer and producer Pharrell Williams to give a virtual address.

“Even if this is not the norm, you guys and girls still deserve all the praise,” Williams said in his message. “You stuck it through, you made it and today’s your day. And man, you made it at a really crazy time in life.”

Some colleges are keeping the same speakers they previously lined up for campus ceremonies, including at Harvard University, which will offer a message from Marty Baron, editor of The Washington Post, and at Ohio State University, which broadcast a virtual address from Apple CEO Tim Cook.

While most campus ceremonies have been canceled or postponed, President Donald Trump recently said he plans to deliver an in-person address at the Military Academy at West Point on June 13. The academy says it’s bringing 1,000 cadets back to the Annapolis, Maryland, campus for the event.

Other political figures recruited to deliver virtual speeches include House Speaker Nancy Pelosi, who will speak to graduates at Smith College in Massachusetts, and Dr. Deborah Birx, the Trump administration’s coronavirus response coordinator, who gave a video address for New York’s Houghton College.

The virtual celebrations have a different look from school to school, with some preparing videos that are recorded in advance and then shared online. Others are holding live events over video conference, in some cases produced by companies promising to replicate the traditional graduation experience.

Some are passing up on celebrity speeches, though, saying the online events aren't meant to be an exact replica of the campus event. At Rice University, officials are hosting an online event with no guest speaker. Instead, the school hopes to bring graduates back for a belated ceremony on campus with the previously announced keynote speaker, New York Times columnist Nicholas Kristof.

And some others are skipping online events entirely. Officials at the University of California, Berkeley, say they surveyed students and found it was their “clear preference” to pass on a virtual celebration and aim for a campus celebration later. A message from the university said it's “too early at this stage of the pandemic to finalize when and how we will mark this milestone.”