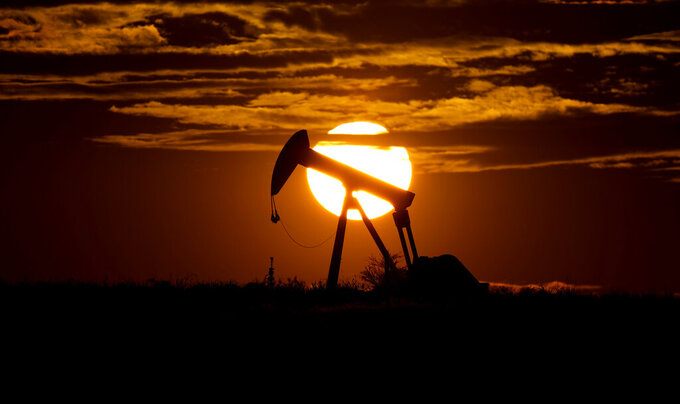 FILE - In this Wednesday, April 8, 2020, file photo, the sun sets behind an idle pump jack near Karnes City, USA. Members of oil producer cartel OPEC and allied countries are meeting online Thursday March 4, 2021, considering a possible increase in production now that prices have recovered to near their pre-pandemic levels. (AP Photo/Eric Gay, File)

FRANKFURT, Germany (AP) — Caution about the pandemic took the upper hand Thursday at a meeting of the OPEC oil cartel and allied countries, as they left most of their production cuts in place amid worry that coronavirus restrictions could still undermine recovering demand for crude.

Many analysts had expected a small production increase as the price of oil has risen 30% since the start of the year on hopes that the pandemic will ease, allowing for an economic rebound that should increase energy consumption.

Instead, the group of oil producers opted for caution, and their decision in favor of supply restraint quickly sent crude oil prices even higher. The U.S. contract, which had plunged below zero last year as the pandemic restrictions on businesses devastated demand for energy, jumped about 5% on the day to over $64 a barrel.

OPEC countries led by Saudi Arabia joined with other countries including Russia to reach the deal in an online meeting Thursday.

Most significantly, Saudi Arabia will keep one million barrels per day in voluntary cuts least through April. Energy Minister Abdulaziz bin Salman said they would eventually and gradually be withdrawn over the next few months depending what the market requires, without specifying when or under what conditions.

Bin Salman called it “a good decision and a surprising decision” and noted that the group “had to disappoint those who speculated about what we would do.”

The so-called OPEC Plus group - which includes countries like Russia that are not part of the cartel but have been coordinating production in recent years - made deep cuts in output in 2020 to stave off a collapse in prices.

As more economic activity returned around the world, the group decided to add back 500,000 barrels per day in December. Saudi Arabia in January voluntarily cut 1 million barrels per day, supporting markets for crude oil.

While Saudi Arabia has been more cautious about production increases, Russia has been a reliable advocate for more supply. One factor contributing to differences is that Russia can balance its state budget at lower oil prices than can Saudi Arabia, according to the International Monetary Fund.

The cost of crude oil makes up half the price of a gallon of gasoline for U.S. drivers, but the key factor in recently higher U.S. gas prices has been the February storms that have taken refineries offline, tightening supply. The national average was $2.74 a gallon on Thursday, up more than 30 cents from the beginning of February.