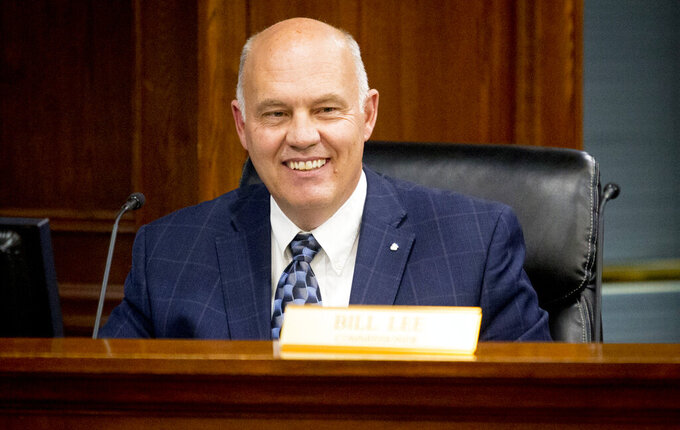 Utah County Commissioner Bill Lee listens to a speaker during a commission meeting held at the Utah County Administration Building on Sept. 30, 2020, in Provo Utah. One of the many negative impacts of the COVID-19 pandemic in Utah County and throughout the state and county has been an increase in opioid abuse. A local public health expert told the Utah County Commission that the rate of opioid-used disorder had leveled off in recent years, but in 2020 abuse increased nationwide. (Isaac Hale/The Daily Herald via AP)

PROVO, Utah (AP) — One of the many negative impacts of the COVID-19 pandemic in Utah County and throughout the state and county has been an increase in opioid abuse, according to a local public health expert.

This information was presented to the Utah County Commission during a work session on Wednesday where Gabriela Murza, who leads Utah State University Extension’s HEART initiative in Utah County, discussed the state-funded program, which “brings academic resources into the community, partnering locally and nationally to address the opioid epidemic and other pressing public health issues," the Daily Herald reported.

According to Murza, the program operates in nine counties, including Utah County, “where opioid use disorder has had some of the most devastating effects as far as overdose and deaths related to opioid use.” Other counties served by the program include Salt Lake, Davis, Tooele and Box Elder counties.

Murza told the commissioners that the rate of opioid use disorder has “leveled off” in recent years and “the trend seems to be getting a little bit better in Utah.”

But, the public health professor added, “then 2020 hit and everywhere the numbers went up, they did increase as far as deaths due to opioids.”

“As far as Utah County specifically, the trends seem to be going down or leveling off. They seem to be getting better. But again, with things like COVID that happened, those numbers are going to be skewed, and it might take some time to bring those levels down again,” Murza said.

While national data typically lags by two years, meaning the most recent national data available is from 2019, Murza said she expects to see “some really kind of scary data for 2020.”

“Because it’s not only opioid use itself, it’s not only the taking of that prescription or that opioid,” she said. “But it’s also the stress that … came with COVID, the stress, the inability to maintain those close relationships, or even being able to go to recovery and support services, or be able to get the treatment that they needed. Even if it was virtual, that wasn’t available for everybody.”

But Murza also noted that she is “feeling positive” about the HEART initiative’s work in Utah County and said she looks forward to continuing to educate and prevent opioid abuse.

“I know the work is there, the work is definitely there,” she said. “So it’ll take some time.”

Commissioner Bill Lee noted that Utah officials have made efforts in recent years to address and prevent opioid abuse in the state.

“We put some significant effort into trying to educate a few years ago on that level and got our hospitals and doctors and dentists and others to buy in and find ways to help, especially on the prescription opioid side,” Lee said.

Also during Wednesday’s work session, 4-H Mentoring Coordinator Brandon Summers told the commission that the youth program, which deals with youth ages 9-15 who are “considered more at-risk,” has expanded “significantly over the last few decades.”

Summers said most mentors in the program are college-aged students who “act as a big brother or big sister to these kids and a role model, and someone that they can look to, since a lot of these kids come from very challenging circumstances.”

The program received two federal grants from the U.S. Department of Justice’s Office of Juvenile Justice and Delinquency Prevention, equating to about $1.2 million in funding for the next three years, according to Summers.