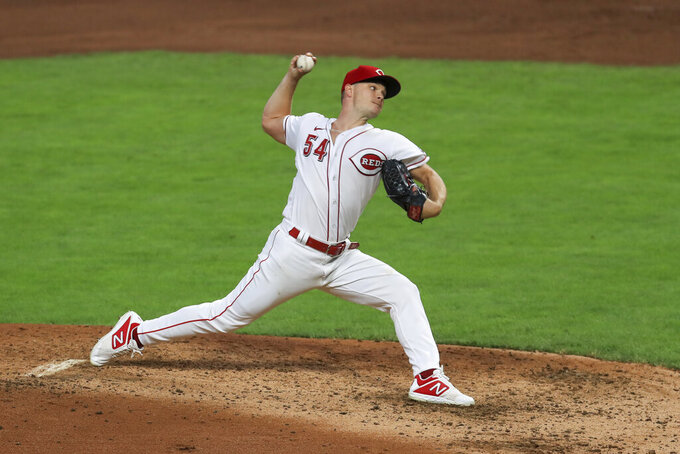 FILE - Cincinnati Reds' Sonny Gray (54) throws during a baseball game against the Pittsburgh Pirates in Cincinnati, in this Friday, Aug. 14, 2020, file photo. The Cincinnati Reds will begin the 2021 season without two of last year’s most important pitchers — National League Cy Young Award winner Trevor Bauer and closer Raisel Iglesias. How manager David Bell will work around those blockbuster departures is a major question as his pitchers begin throwing this week in spring training. (AP Photo/Aaron Doster, File)

The Cincinnati Reds splashed out big money on free agents before a 2020 season that was turned on its head by COVID-19. Despite the uneven results, the Reds begin 2021 believing all the pieces are in place to contend in a long season.

To do so, they'll need a lot more offensive production from mostly the same lineup.

After a slow start, Cincinnati went on a tear in September and elbowed its way into the postseason for the first time in seven years.

The Reds' hot finish — they won 11 of their last 14 to finish 31-29 in the pandemic-shortened season — has them feeling good about the future. With a full spring training and a 162-game season, they like their chances in a National League Central that lacks a juggernaut.

Among regulars, Jesse Winker hit a team-best .255 with 12 homers as the designated hitter. He'll go back to an outfield that includes Castellanos, Nick Senzel and Akiyama, who tweaked a hamstring in spring training and could miss opening day.

First baseman Joey Votto hopes to rebound after some down years. He finished strong in 2020 after making some adjustments at the plate but has missed time in spring training due to a positive COVID-19 test. The Reds also expect a power resurgence from third baseman Eugenio Suarez, who hit .271 with 49 homers and 103 RBIs in 2019 but couldn't get back to that pace.

“The way I see it, our team is still in place,” manager David Bell said. “For the most part, it’s the same group. And it’s the same group that through great challenges over the last couple of years, especially last year, really overcame a lot. There were several times last season when things could have gone the other way, and guys stayed with it. It was important to our players and our team to continue building a winning environment.”

Trevor Bauer's 1.73 ERA last season was good enough for the National League Cy Young Award, and it earned him a huge contract with the Los Angeles Dodgers. Even without him, the Reds pitching staff is generally in decent shape, with Gray, Luis Castillo, Tyler Mahle, Wade Miley and Michael Lorenzen lining up as probable starters. The departure of Raisel Iglesias, the Reds' closer since 2016 who was traded to the Los Angeles Angels, opened the door for Amir Garrett or Lucas Sims. Tejay Antone, who had a 2.80 ERA in 35.1 innings last year, could crack the starting rotation.

With free agent Freddy Galvis signing with the Baltimore Orioles, Kyle Farmer has emerged as a leading candidate at shortstop. He played there in college and has been a valuable utilityman against left-handed pitching. The Reds also will experiment with Suarez at shortstop, with Moustakas moving over to third base, to see if that's a viable option.

The state of Ohio approved 30% of capacity, which is about 12,000 people, for Great American Ball Park. The players, who are seeing limited crowds at spring training games, couldn't be happier.

“It feels like real baseball,” Farmer said. “Last year was awful. Cardboard cutouts don’t talk, but those guys do.”

Dee Strange-Gordon, Tyler Naquin and Scott Heineman are among those trying to make the team as bench players. Heineman, who is having a good spring at the plate, could be an option at first base if Votto's return is delayed.

Jose Garcia, who was rushed to the majors last year from High A ball, could be the team's shortstop of the future but might need a little more seasoning. Catcher Tyler Stephenson, who hit two home runs in eight plate appearances last year, will back up starter Tucker Barnhart.