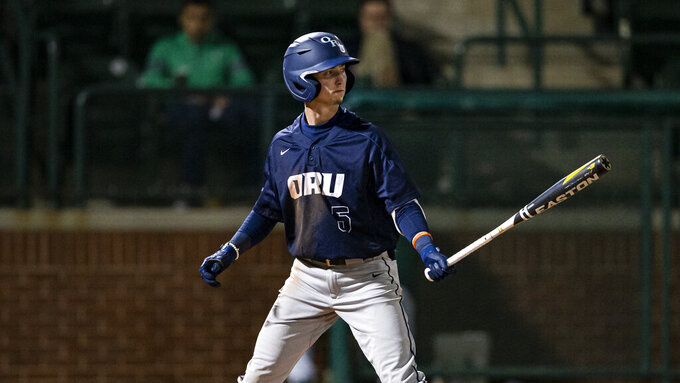 FILE - Oral Roberts junior Ryan Cash bats during an NCAA baseball game against Baylor in Waco, Texas, in this Friday, Feb. 21, 2020, file photo. Ryan Cash had five hits and five RBIs as Oral Roberts won two of three games against nationally ranked LSU in Baton Rouge, Louisiana, this past weekend. Oral Roberts won a series against an opponent from the Southeastern Conference for the first time since 2017. (AP Photo/Brandon Wade, File)

Oral Roberts' series win at nationally ranked LSU over the weekend might be the tonic the Golden Eagles need after an uncharacteristic poor start.

The Eagles of the Summit League lost six of their first eight games, all at home, before they won two of three against a Southeastern Conference opponent for the first time since 2017.

“We're an older group and we have a lot of Division I transfers, so this is a pretty experienced bunch,” ninth-year coach Ryan Folmar said Monday. “We thought we would be off to a better start than we were.”

Oral Roberts scored eight first-inning runs off Jaden Hill on Friday, and reliever Evan Kowalski allowed two hits and one walk in seven scoreless innings in a 22-7 win, the Eagles' most runs against a Power Five opponent since 2002.

The Eagles lost 12-0 Saturday and bounced back with a 3-1 win Sunday. Tanner Rogen pitched six strong innings, shortstop Anthony Martinez and catcher Brody Gibson made big defensive plays, and the Eagles scored the go-ahead run on two throwing errors on the same play.

Ryan Cash, one of five Division I transfers in the everyday lineup, had five hits and five RBIs in the series and Caleb Denny had four hits and drove in seven runs. Jake McMurray had six hits.

“The ups and downs of baseball,” Tigers coach Paul Mainieri said after Sunday's game. "Obviously, it's a very difficult one to accept."

Almost everybody is back from last year at Oral Roberts, but the 2020 team had a bevy of newcomers and played only 16 games before the pandemic shut down the season. Most of the players had limited opportunities to play in the summer, and the pandemic led to practice restrictions and a longer holiday break.

“There have been a lot of things we and every other team have had to deal with entering the year, and there are a lot of unknowns,” Folmar said. “This is the first time a lot of these guys are playing together, and I think it's going to take us some time to really find our way through these first 20-25 games. After that we feel we have a chance to be a really good club.”

The Eagles have a proud history. They won the Summit League every year except three between 1999-2019, made the most recent of their 28 NCAA Tournament appearances in 2018, reached super regionals in 2006 and made their only College World Series appearance in 1978.

“The people who are in our game understand there's been a long storied tradition here at ORU,” Folmar said, “and this is just another team trying into carry on that tradition.”

Arkansas swept three games from Murray State and remains the consensus No. 1 team. The Razorbacks are 10-0 for the first time since 2003 and third time in program history.

Mississippi third baseman Tim Elko was batting just .120 through his first seven games. Last week, he hit five home runs in five games. He was 10 for 17 with eight runs scored, a double and 13 RBIs and raised his average to .310.

Travis Weston, one of three Boise State players to transfer to Cal Poly after the Broncos dropped baseball in July, pitched the Mustangs' first complete game in three years in a 5-1 win over Utah Valley on Saturday.

Weston struck out a career-high 11 with no walks and gave up two hits, both doubles that produced Utah Valley's only run.

Weston made three starts for Boise State, which brought back its baseball program last year after a 40-year hiatus. The Broncos played 14 games before COVID-19 ended spring sports. In July, the school dropped the program in response to budget problems tied to the pandemic.

Penn State's Johnny Piacentino, who had one home run in his first 13 career games, went deep a school record-tying three times against Northwestern on Sunday. The Nittany Lions finished with five homers in the 13-10 win and had eight in four games against the Wildcats.

Merrimack's Alex Haba hit for the cycle in a 14-9 loss to Maine on Sunday. He doubled in the first inning, homered in the third, singled in the fifth and tripled in the eighth.

Haba had four extra-base hits in the doubleheader split, one more than he had in 15 games last year.