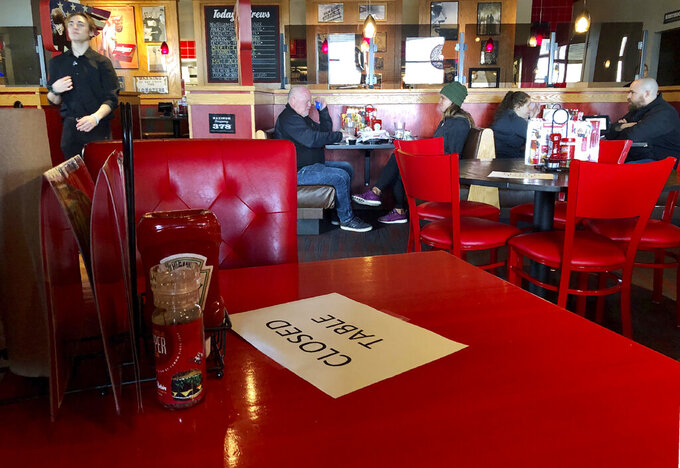 FILE - In this March 15, 2020, file photo, a Red Robin restaurant in Tigard, Ore., has closed some tables in order to maintain social distancing between diners per CDC guidelines. Oregon Gov. Kate Brown on Friday, Nov. 13, 2020, announced a statewide two-week "freeze" which will limit restaurants and bars to take-out only and close gyms, indoor and outdoor recreational facilities during that period. If people do not abide by the governor's latest mandates, which restricts social gatherings to six people, they could face a citation, fine or arrest. (AP Photo/Gillian Flaccus, File)

SALEM, Ore. (AP) — In March life in Oregon, and across the country, came to a screeching halt.

Restaurants only served meals in to-go bags. Long-term care facilities locked their doors in an effort to save their tenants. Playgrounds were childless and classrooms were operated through computer screens. Businesses hastily expanded their online stores and employees were sent home. The only crowds that could be seen were gathered outside grocery stores in lines stretching around the building.

During the summer and fall “Closed" signs began to be flipped back over to “Open.”

As COVID-19 cases surge across Oregon a slew of new restrictions are being implemented in the state, as part of a two-week freeze that begins Wednesday in and effort to halt social activities and slow the spread in transmission. Restaurants are once again being limited to take-out only and some businesses must lock their doors. This time, the lack of a federal economic backstop are leaving owners and employees apprehensive about their ability to survive the financial impact.

“We were already hearing from members they were concerned about what another shutdown would do to their chances of staying open,” said Jason Brandt, the president & CEO for the Oregon Restaurant & Lodging Association. “This latest round of regulations focused on restaurants will trigger an unknown amount of permanent closures impacting the livelihoods of thousands of Oregon families.”

Since the start of the COVID-19 pandemic around 200 restaurants, or 2 percent, have permanently closed. Brandt said that number is likely significantly higher.

A month into Oregon's March shutdown, an estimated 81% of Oregon restaurant workers had been laid off or furloughed — impacting 127,000 employees, according to a national survey conducted by the National Restaurant Association.

But this time around federal funds have dwindled and the pool of significant financial resources are arid.

“This is incredibly different than the last go around because we had the federal government to pass relief packages to prop up businesses,” Brandt said.

The Paycheck Protection Program, a key piece of the coronavirus relief legislation Congress approved in March, handed out more than $650 billion in loans and increased the survivability of businesses.

A separate federal relief program that paid unemployed Americans an extra $600 per week has lapsed as well.

For weeks Brown has called on Congress to pass another COVID-19 relief package, which she said should immediately reinstitute the $600 supplemental benefit for unemployment and enhance federal employment compensation.

“We know very, very, clearly that the band-aid has been ripped off and that our historically underserved communities – our communities of color, our low income communities, our rural communities -- have been disproportionately impacted," Brown said.

In addition, following the announcement of new restrictions, officials from the Oregon Employment Department said they are preparing to increase its claims processing capacity with support from the National Guard. The department is also developing an option for impacted employers to submit employee information in bulk to minimize the need for employees to locate key information that may not be easily accessible.

Between the start of the pandemic and July more than 500,000 Oregonians had filed unemployment claims, causing major delays in people receiving funds — thousands of people waiting months for unemployment.

In less than three days all the funds had been used.

Brandt said the upcoming freeze is likely “going to be the fight for small businesses' lives.”

For months many Oregon restaurants have been operating at a limited capacity, 100 people, and had a curfew of 10 p.m.

Brandt said that since reopening, many restaurant owners have invested their money into creating outdoor dining structures and heating so they can operate in the winter.

Ezra Caraeff, who owns three bar-restaurants and one bar in Portland, said he has spent weeks retrofitting his establishment for outdoor dining in Oregon's wet winter weather. During March, Ezra said he had to lay off 50 people. Since then he has rehired most of them.

“The hardest part last time was not closing down or washing my hands more, the hardest part was laying off 50 people,” he said. “So to have to do this again is hard to even think about.”

Caraeff said the latest closure order will be devastating for him and his employees.

“It’s difficult to comprehend it. It’s gonna be a blood bath. … We should shut down, I agree with shutting down, but is there rent relief? There’s not,” he said.

“My ask of the public is, let’s support some of these restaurants,” he said. “Let’s show these restaurants some love because if we want them to be there on the other side of the COVID crisis, we’ve got to support them now.”

Oregon's statewide two-week freeze begins Nov. 18 but for some counties, including Multnomah — Oregon's most populous county and home to Portland — the freeze is expected to last longer.

On top of take-out only, grocery stores, pharmacies and retail stores are limited to a maximum capacity of 75%. Faith based organizations will also have their capacity reduced to 25 people indoors and 50 people outdoors.

Gyms and fitness centers, museums, pools, sports courts, movie theaters, zoos, gardens, aquariums and venues will have to close their doors completely. All businesses will be required to close their offices to the public and mandate work-from-home “to the greatest extent possible."

Lastly, both indoor and outdoor social get-togethers are limited to six people, total, from no more than two households.

For the past few weeks, Oregon has seen daily case counts surging at an “alarming” rate, threatening hospital capacity.

The Oregon Health Authority reported 781 new confirmed and presumptive cases of COVID-19 on Monday, raising the state's total to 57,646. The death toll is 765.