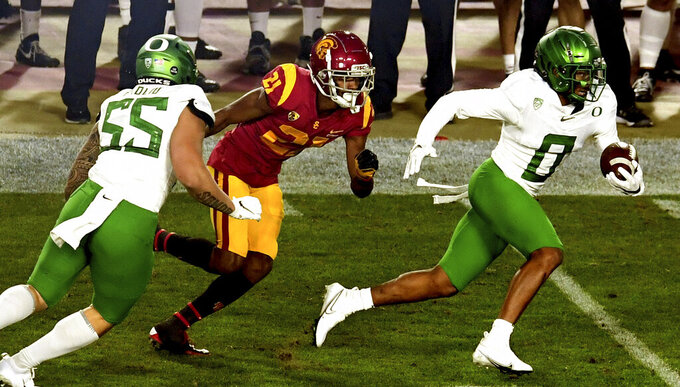 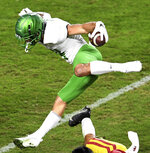 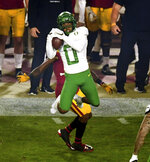 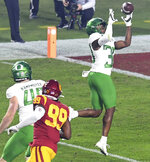 LOS ANGELES (AP) — Anthony Brown threw two touchdown passes in his unusual Oregon debut, Jamal Hill made an interception with 2:47 to play, and the Ducks won their second straight Pac-12 title with a 31-24 victory over No. 13 Southern California in the championship game Friday night.

Tyler Shough also threw two touchdown passes for the Ducks (4-2), who didn't win the North Division, yet still claimed the Pac-12's New Year's Six bowl berth with their only victory in the past month.

Oregon had a 31-17 lead with less than 10 minutes to play, but Bru McCoy caught a TD pass on fourth down for the Trojans (5-1) before they got the ball back with 4:43 left. USC reached midfield in search of a fourth-quarter comeback win for the fourth time in its six-game season, but Kedon Slovis threw the first fourth-quarter interception of his career.

Hill made an acrobatic play to hang on to the poorly thrown ball, and Oregon's offense ran all but 23 seconds off the clock. USC reached the Oregon 49, but the Ducks' pass rush prevented Slovis from getting off a Hail Mary.

Jaylon Redd, Hunter Kampmoyer, DJ Johnson and Travis Dye caught TD passes for the Ducks, who got into the title game after consecutive losses only because Washington had to drop out Monday due to coronavirus problems in the program.

Oregon seized the opportunity to continue its domination of the Trojans on the way to the school's sixth Pac-12 championship in 12 years, including two straight under coach Mario Cristobal. The North Division has won nine of the 10 editions of this title game, including a record four by Oregon.

Slovis passed for 320 yards with two touchdowns and three interceptions for the Trojans, whose perfect season ended with their fourth loss in their last five meetings with Oregon.

USC fell behind 14-0 in the opening minutes after two interceptions from Slovis led to TD drives by the Ducks — and unlike every other game this season, the Trojans never caught up.

The Ducks stunned almost everybody in the mostly empty Coliseum by replacing Shough occasionally with Brown, a senior graduate transfer from Boston College who hadn’t recorded any statistics for Oregon this season. Ducks offensive coordinator Joe Moorhead substituted Brown at various points in various drives throughout the game, and Brown made a series of big plays.

Brown’s first throw for the Ducks was a TD pass to Redd on Oregon’s opening drive. He threw another scoring pass to Dye in the third quarter, finishing 3 of 4 for 17 yards.

Amon-Ra St. Brown caught a TD pass and Markese Stepp rushed for a score, but the Trojans failed to complete one more fourth-quarter rally in a season full of them.

USC earned its spot in the title game by going unbeaten with three late comeback victories along the way. The Trojans weren’t perfect, but their deep offense and improving defense comprised the most resilient group in the league.

Oregon’s path to the Coliseum was more complex: The Ducks lost their two most recent games to Oregon State and California, and the Huskies were picked to play USC before the change. The Ducks also came in with an extra week of rest because their game against the Huskies last weekend was canceled.

Slovis threw another interception midway through the quarter, giving him six turnovers in his last four quarters against Oregon dating to the Ducks’ demolition of USC last season. Kampmoyer’s catch put Oregon up by two touchdowns, but the Trojans woke up with St. Brown’s 47-yard TD grab late in the quarter.

Shough hit Johnson with a 16-yard TD pass in the second quarter before Stepp’s 1-yard TD run capped USC’s 80-yard drive in response. But the Trojans couldn’t capitalize after linebacker Kana’i Mauga’s rambling 34-yard interception return in the closing seconds. Oregon led 21-14 at halftime despite having just 122 yards of offense.

Brown hit Dye with a short TD pass to finish a drive that consumed half of the third quarter. McCoy even recovered an onside kick later in the quarter, but the Trojans did nothing with the ball.

Oregon: The well-rested Ducks seized their golden opportunity to make another big postseason splash. Cristobal's team has all the big-game poise USC lacks, and that's why Oregon will be bowling in the New Year despite all of its flaws this season.

USC: The Trojans finally fell off the high wire that was their season, but in predictable fashion with turnovers, poor blocking and too many missed tackles. USC wasn't a perfect team despite its perfect record, and everything caught up to the Trojans in another setback for perpetually embattled coach Clay Helton.

Oregon: A probable berth in the Fiesta Bowl on Jan. 2.

USC: A probable berth in the Alamo Bowl on Dec. 29.