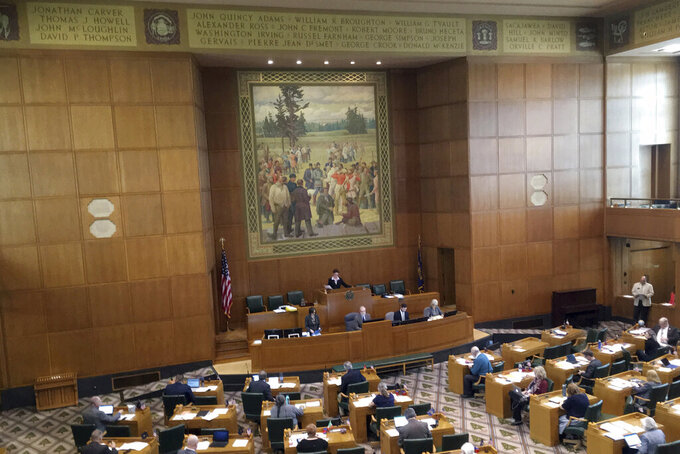 FILE - In this April 26, 2017, file photo, lawmakers in Oregon's House of Representatives sit-in session in Salem, Ore. Acknowledging Oregon's history of racism, Democratic leaders in the House pledged Monday, Jan. 4, 2021, to open paths for more diverse representation in the Legislature and its leadership. In a related development, Rep. Janelle Bynum, who is Black, announced she is dropping her bid to unseat Rep. Tina Kotek, who is white, as House speaker. Back in 2017, Bynum had noted that Oregon's original Constitution prohibited Black people from residing in the territory and said she was reminded of that by the huge mural of white settlers on the House wall. (AP Photo/Andrew Selsky, File)

SALEM, Ore. (AP) — Acknowledging Oregon's history of racism, Democratic leaders in the state House pledged Monday to open paths for more diverse representation in the Legislature and its leadership.

It comes as Rep. Janelle Bynum, who is Black and represents Portland's eastern suburbs, announced she is dropping her bid to unseat Rep. Tina Kotek, who is white, as state House speaker.

“I look forward to the day in the near future where Oregon State Representatives are able to vote with pride and unity to elect me to lead the chamber,” Bynum said on Twitter.

Bynum had announced in November that she would seek the nomination for speaker on the House floor. She did not go through the usual channels of seeking the party’s nomination.

“For too long, old ‘traditions’ and ‘customs’ have ... prevented people who don’t come from traditional political backgrounds or communities of color from successfully challenging the status quo,” Bynum said then, according to Oregon Public Broadcasting.

“For years, Rep. Bynum has refused to accept the status quo systems of power in the state,” the leaders of the Democratic-controlled House said in a joint statement.

The Oregon Constitution, written in 1857, prohibited Black people from living in the state. The exclusionary clause wasn’t repealed until 1927. Today, Oregon’s population is only 2.2% Black, compared with 13.4% for all of America, according to the U.S. Census Bureau.

They noted the Legislature remains “overwhelmingly white” and pledged to:

— Include House members of color in Democratic caucus leadership.

— Create a committee to propose reforms that would encourage more diverse representation and engagement.

— Provide staff support for the Legislature's “People of Color Caucus.”

— Prioritize the needs of people of color affected by the coronavirus pandemic, its associated economic woes and wildfires.

Bynum called these moves “aspects of the deal” she had worked out with House Democratic leaders in ending her bid, at least for now, for a leadership position.

In a statement, House Republican Leader Christine Drazan said: “House Republicans stand for fairness and opportunity for all Oregonians, including those historically marginalized. Today, the Speaker and Majority Leader offered crumbs off the table of kings and affirmed that anyone challenging their long-held power need not apply."