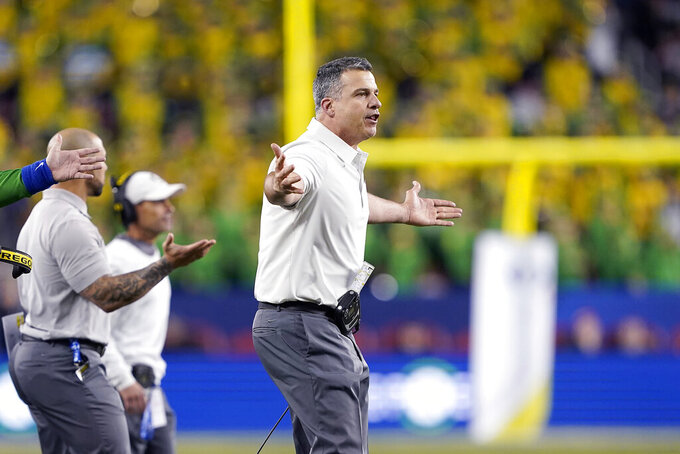 Easily the most obvious question for Oregon this season is how to move on after Justin Herbert.

Tyler Shough hopes it's his time. And the Ducks seem to think so.

Herbert started 42 games at Oregon, compiling a 29-13 record with 10,541 passing yards and 108 total touchdowns. He led the Ducks to the Pac-12 championship last season and a win over Wisconsin in the Rose Bowl, where he ran for three touchdowns and was named the offensive MVP.

“It certainly is different, right?" Ducks coach Mario Cristobal said. “We’ve been accustomed to seeing No. 10 take every snap under center for a good chunk of time now.”

Herbert is now with the Los Angeles Chargers, while heir apparent Shough is embarking on his sophomore season after throwing for 144 yards and three touchdowns in a backup role last season.

“Tyler Shough has done a great job, he really has, when he’s had his opportunities in there, in practice. In spring ball, he got off to a great, great start. He has a natural field presence, he has a commanding presence out there,” Cristobal said.

Shough's presumed backup will be Anthony Brown, a Boston College transfer. Although he has battled knee injuries, he joins Shough as the only two QBs on the roster with college game experience.

“Obviously you can’t replace a guy like Justin Herbert and the guys before him,” Shough said. “I'm just trying to be myself. I’m trying to be Tyler and make my own name and write my own story and this chapter here.”

In addition to Herbert, the Ducks will have to replace five starters on the offensive line. But Oregon returns key skill position players, including running back CJ Verdell, along with receivers Jaylon Redd and Johnny Johnson III.

Despite not playing a down yet, Oregon is ranked No. 14 in the latest AP Top 25. The Ducks have been picked by the media as the preseason favorites to win the Pac-12 championship.

Oregon had several high-profile players opt out of the COVID-19-shortened season to focus on the NFL draft. Probably the most significant was left tackle Penei Sewell, who won the Outland Trophy as a sophomore last season. The 6-foot-3, 330-pound Sewell is expected to be one of the top picks in the draft.

“The love and support I received has been overwhelming, and I could not be more grateful,” Sewell posted to Twitter. “But ever since I was little, I have dreamt of playing professional football.”

Safety Brady Breeze, the Rose Bowl defensive MVP, and fellow defensive back Jevon Holland, who could also be a first-round pick, were among the other Ducks to opt out.

He replaces Marcus Arroyo, who left Oregon to become the head coach at UNLV.

Mississippi State had dismissed Moorhead after two seasons and hired Washington State coach Mike Leach to replace him. The Bulldogs went 6-7 last season, finishing with a loss to Louisville in the Music City Bowl.

One thing that will be really weird for the Ducks this short season will be home games at Autzen Stadium, known as one of the loudest and inhospitable venues in the Pac-12.

“It’s just up to the players, you know, to bring our own energy, your own juice,” Verdell said. “Fans definitely add the atmosphere to it, but at the end of the day we’re going there to go out there on the field and play football.”

Oregon does not generally release the results of its coronavirus testing, citing athlete privacy. However, Oregon canceled a scrimmage last weekend after five players tested positive. Subsequent tests were negative, and the players returned to practice Tuesday.

The Ducks open at home with Stanford. The rivalry game against Oregon State will still be Thanksgiving weekend, but it won't cap the season. Oregon's lone game against a South Division team comes on Nov. 20, when the Ducks will host UCLA and former coach Chip Kelly.