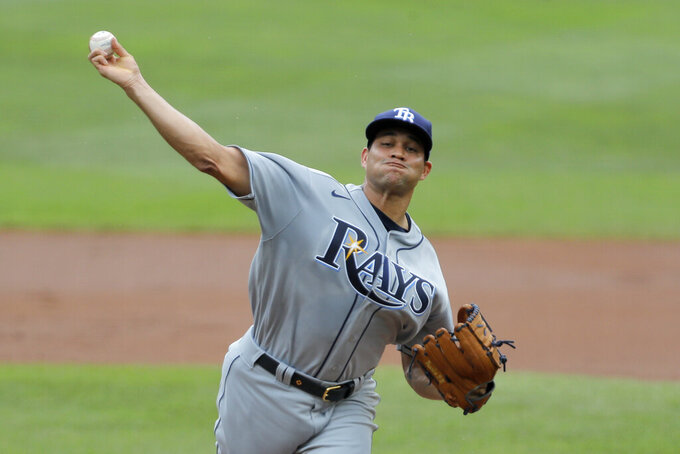 After the final out, the Orioles celebrated (with proper social distancing) their first series sweep since Aug. 27-29, 2018, against Toronto, and first against Tampa Bay since 2016.

With the score 1-all in the seventh, Cedric Mullins reached on a bunt against Jalen Beeks (0-1). Chaz Roe entered and Mullins stole second before Alberto hit an opposite-field liner to right. Núñez followed with an RBI single, and José Iglesias added a run-scoring double into the left-field corner.

Valaika made it 5-1 with a solo shot in the eighth.

Evan Phillips (1-0) pitched the seventh to earn his first major league win, and Cole Sulser picked up his third save as part of a Baltimore bullpen that held the Rays hitless over four innings.

Tampa Bay starter Yonny Chirinos allowed one run and four hits over 4 2/3 innings, the lone glaring flaw a drive by Núñez in the third. That's the only earned run Chirinos has given up this season, leaving him with a 1.04 ERA in two starts.

The Rays trailed 1-0 when Lowe led off the sixth with a drive to center that chased Orioles starter Tommy Milone.

Using a variety of off-speed pitches and changeups, Milone struck out eight and allowed six hits. It was a vast improvement upon his opening-day performance, when the lefty gave up four runs in three innings against Boston in his Orioles debut.

Orioles pitchers struck out 10 to set a new club record of five straight games with at least 10 strikeouts.

The Orioles won Saturday night's game on a single in the bottom of the 11th, a scenario that in normal times would be marked by the roar of the crowd and a hands-on celebration in the dugout.

None of that happened, of course, because the stadium was empty and the players are well aware of baseball's emphasis on social distancing.

“Usually in that kind of situation the crowd goes nuts, our team is going nuts, we're high-fiving everywhere in the dugout. A lot of positive emotion is going on," manager Brandon Hyde said. “To not know what to do with your hands was definitely odd. It's tough. I'm looking forward to the day when the crowd goes crazy again."

Rays: C Kevan Smith was expected to rejoin the team after being placed on the COVID-19 injury list as a precaution Saturday because he was experiencing symptoms despite not testing positive. “Credit to him for coming forward," manager Kevin Cash said Sunday morning. “He's fine. He had two negatives, and we're waiting for clearance."

Orioles: 1B Chris Davis (knee soreness) and Iglesias (sore left quad) were not in the starting lineup.

Rays: Following a day off, right-hander Charlie Morton (0-0, 8.00 ERA) gets the ball when Tampa Bay visits the New York Yankees on Tuesday night.

Orioles: Off Monday before hosting Miami on Tuesday night to launch a four-game, three-day series — if the Marlins have fully recovered from their COVID-19 outbreak.