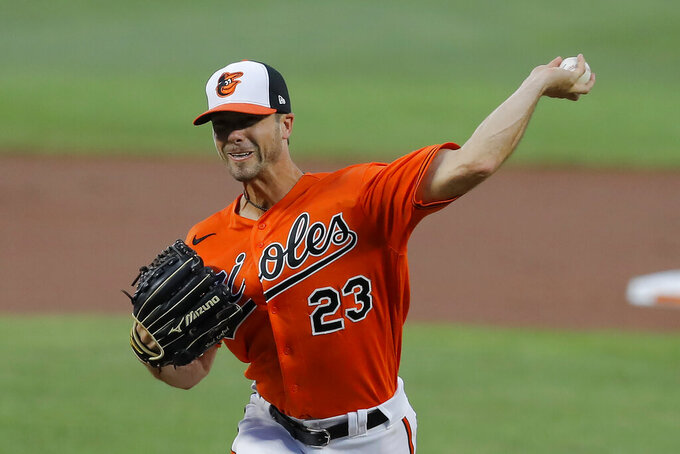 Newcomer Bryan Holaday scored the deciding run after making a sensational diving catch in the top of the 11th to start an inning-ending double play. Holaday was added to the roster to replace Richard Bleier, who was traded after midnight on Saturday.

Holaday advanced from second to third on a sacrifice bunt off Oliver Drake (0-2), and with two outs came home on Valaika’s opposite-field liner to right off Chaz Roe.

The rules this season call for a runner to start at second base in extra innings. This was the first time the Orioles experienced it, and the result was satisfying.

“I didn't know what it was going to be like, but that was a lot of fun," manager Brandon Hyde said. ‘’I'm glad to get that under my belt. I enjoyed it."

Baltimore turned a double play in each of the two extra innings, including what Hyde claimed to be “the first leadoff double play in Major League history." Yoshi Tsutsugo began the 10th with a fly to deep left, and Ji-Man Choi was thrown out at third trying to advance.

In the 11th, Holoday dived to his right, snagged a liner off the bat of Manuel Margot and easily doubled up Kevin Kiermaier off second.

“I had scoring on my mind, and the ball’s hit so hard," Kiermaier said. “Manny hits it right to the guy, and it didn’t work in our favor right there. That’s just kind of how it’s been for us lately.”

Coming off a playoff appearance in 2019, the Rays opened this abbreviated season with a 4-1 record before losing two in Atlanta and two to the lowly Orioles, who lost 115 games in 2018 and 108 last year.

With a victory Sunday, Baltimore will have its first series sweep since taking three from Toronto in August 2018.

Tampa Bay trailed 4-1 in the eighth before mounting a rally fueled by a pivotal throwing error.

After Orioles reliever Shawn Armstrong snagged a comebacker and threw past second base on a potential double-play ball, the Rays got an RBI single from Joe Martinez, a run-scoring grounder by pinch-hitter Brandon Lowe and a pinch-hit RBI single from Kiermaier.

“We didn't field our position in the eighth and that really hurt us," Hyde said.

The Orioles opened the home portion of their season Wednesday against the Yankees instead of the Marlins, who went into quarantine Monday after several players and coaches tested positive for COVID-19.

Now, Baltimore faces another schedule change: Miami is slated to return to action Tuesday night at Camden Yards for a four-game series over three days. Two of the games will make up for the Marlins' planned visit on July 29-30, and Miami will be the “host" team in the other two to make up for games versus Baltimore scheduled in Florida on July 27-28.

The Rays, meanwhile, had their Aug. 6 game against the Yankees rescheduled as part of a doubleheader on Aug. 8.

A shortened season isn't going to slow Elias' effort to build the Orioles into a winner. The second-year GM traded Bleier to Miami for a player to be named.

“It's part of the process and the transition this club is going through," Elias said. “We're going to get something back that is meaningful for our future."

Rays: LHP Brendan McKay (COVID-19 injury list) has been cleared to return but will need some time to build up his arm strength, manager Kevin Cash said. ... OF Austin Meadows (COVID-19) is on course to be activated during the Rays' next homestand (Aug. 4-9), according to Cash.

Orioles: 1B Chris Davis was scratched from the lineup with knee soreness. ... RH reliever Hunter Harvey (forearm strain) has been cleared to start throwing but Elias said it will be a few weeks before he can play.

Rays: RHP Yonny Chirinos starts in the series finale Sunday. He did not allow an unearned run over four innings in Atlanta on Tuesday.

Orioles: Opening day starter Tommy Milone (0-1, 12.00) seeks his first win with Baltimore after getting knocked around by Boston on July 24.