Osaka tosses racket, overcomes test from teenager at US Open 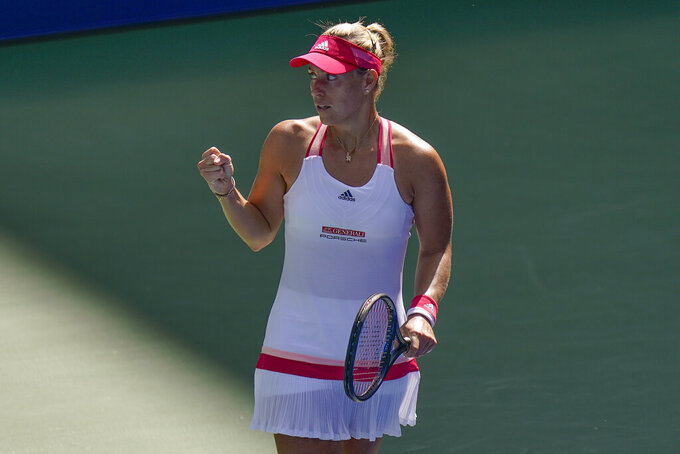 Angelique Kerber, of Germany, reacts after winning a match against Ann Li, off the United States, during the third round of the US Open tennis championships, Friday, Sept. 4, 2020, in New York. (AP Photo/Seth Wenig) 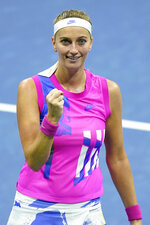 NEW YORK (AP) — Naomi Osaka spiked her racket after one errant forehand late in the second set at the U.S. Open, then flung it the length of the baseline after a missed backhand return ceded that tiebreaker.

Sometimes, that’s the sort of reaction it takes to right things for Osaka. And, perhaps surprisingly, she needed whatever push she could get in Friday's third-round match.

Facing an opponent competing in just her second major tournament, two-time Grand Slam champion Osaka eventually figured out a way to turn a tight one into a runaway and beat 18-year-old Marta Kostyuk 6-3, 6-7 (4), 6-2 by claiming the final five games at Flushing Meadows.

“While I was playing, honestly, I was cursing myself out,” Osaka said during an on-court interview, “so you wouldn’t want to know what I was saying.”

After taking things out on her racket, Osaka sat with a white towel draped over head during a changeover.

“It's what I do in times of extreme anger and frustration,” she said.

Still, she improved to 7-0 since tennis resumed after a hiatus of more than five months because of the coronavirus pandemic.

Djokovic's bid for a fourth championship in New York and 18th Grand Slam title overall — Roger Federer, with 20, and Rafael Nadal, with 19, are the only men with more, and neither entered this tournament — will continue in the fourth round against 20th-seeded Pablo Carreno Busta on Sunday.

Another past U.S. Open champion moving into the fourth round Friday was 2016 titlist Angelique Kerber, who defeated 20-year-old American Ann Li 6-3, 6-4. Kerber’s next opponent is another American, 28th-seeded Jennifer Brady, a 6-3, 6-3 winner against Caroline Garcia.

Next up for Osaka will be big hitter Anett Kontaveit, an Estonian seeded 14th. She had a much easier time in a 6-3, 6-2 win over No. 24 Magda Linette.

Men reaching the fourth round included No. 5 Alexander Zverev, No. 7 David Goffin, No. 12 Denis Shapovalov — who won a five-setter over No. 19 Taylor Fritz — Jordan Thompson and Alejandro Davidovich Fokina.

Down 5-1 in the fourth set, he broke Tsitsipas three straight times, fighting off six break points.

Zverev's four-set win over No. 32 Adrian Mannarino began more than 2 1/2 hours later than planned in Louis Armstrong Stadium after the state of New York got involved in whether Mannarino should be allowed to continue to participate at all.

Mannarino is part of a group of seven players who were placed under extra restrictions during the tournament — including being tested every day for the coronavirus — because contact tracing determined they potentially could have been exposed to COVID-19 by Benoit Paire, the only entrant to test positive.

Mannarino said he found out about a half-hour before finally heading to the court to play that he was cleared.

With shadows creeping across the Arthur Ashe Stadium court in the early afternoon, the 137th-ranked Kostyuk certainly had her chances to pull off a significant surprise.

The key moment: Kostyuk held five break points that could have given her a 3-1 lead in the final set.

She fended off every one of those and held to 2-all, beginning her match-closing run.

“I’m kind of scared how she’s going to be in the future,” said Osaka, who played with tape wrapping her left hamstring, which has been a problem since last week. “She has no fear.”

Kostyuk had her own issues: She twice took a medical timeout to have a trainer tape her right ankle.

But she also was able to control the outcomes of points for stretches, winning 19 of the 23 points when she went to the net. The Ukrainian teen also delivered more winners than Osaka, 36-30, over the match’s 2 1/2 hours.

“I guess I would say the thing that made me most displeased was probably the decisions that I was making and the fact that I started becoming way too passive,” Osaka said, “and hoping that she would, you know, make an unforced error.”

Before and after the match, Osaka wore a mask bearing the name of Ahmaud Arbery, a Black man who was fatally shot after being pursued by armed white men in Georgia.

Each time on court during the tournament, Osaka is wearing a different mask in memory of a victim of racial injustice.

“None of these deaths had to happen,” Osaka said. “For me, I just want everyone to know the names more.”