Out of pandemic crisis, what could a new New Deal look like? 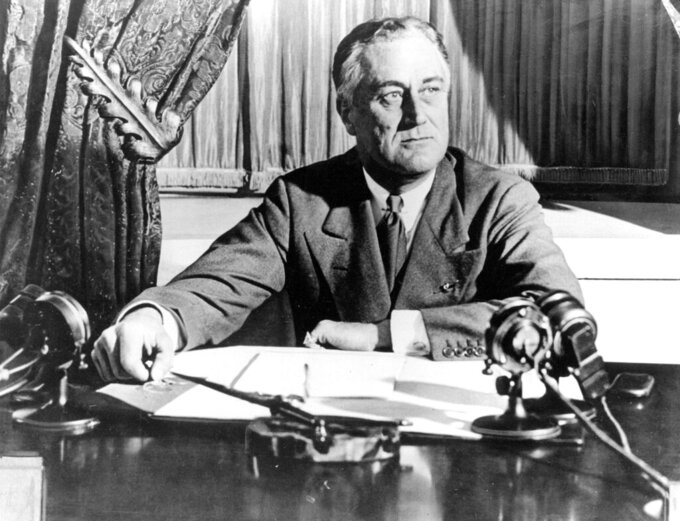 FILE - In this March 1933, file photo, President Franklin D. Roosevelt delivers his first radio "fireside chat" in Washington. The New Deal was a try-anything moment during the Great Depression that remade the role of the federal government in American life. (AP Photo)

WASHINGTON (AP) — The New Deal was really a series of new deals, spread out over more than six years during the Great Depression — a menu of nationally scaled projects that were one part make work and many parts lasting impact. They delivered a broad-shouldered expression of presidential authority whose overall benefits were both economic and psychological.

Not all of them worked. Some failed badly. But it was a try-anything moment by Franklin D. Roosevelt at a time of national despair. And it remade the role of the federal government in American life.

Now, nearly 90 years later, the United States is in the midst of fighting a disease that presents the country with wrenching life-and-death challenges. Yet at the same time, it has served up something else as well: a rare opportunity to galvanize Americans for change. And there are early soundings of a larger question: What would a “new” New Deal look like?

“It at least allows you to think of something that could come out of this that could be positive," says historian Doris Kearns Goodwin, whose latest book is “Leadership in Turbulent Times."

During the New Deal, Men were hired to plant trees in Oklahoma after the Dust Bowl and to build roads, bridges and schools. In most every state, you can still see murals or read local histories or walk into enduring projects like LaGuardia Airport and Dealey Plaza in Dallas. And the era's legacy continues to provide support today. Unemployment insurance. Retirement and disability income. Transparency in the stock markets.

Yet the coronavirus outbreak has also revealed how ill-equipped the government was to address the rapidly escalating fallout of 26 million job losses, overwhelmed hospitals and millions of shuttered businesses only weeks away from failure.

“We basically have a 21st-century economy wobbling on a 20th-century foundation,” said Rahm Emanuel, the former mayor of Chicago and chief of staff to President Barack Obama.

Any mandate for change will come from the ballot boxes this November. President Donald Trump has talked up infrastructure programs and affordable healthcare, but offered few details. Joe Biden, the presumptive Democratic nominee, has talked more about combating the pandemic than about reimagining what kind of country might emerge from it.

So far, Congress has committed more than $2 trillion to sustaining the economy during the outbreak. But most economists see that unprecedented sum as relief, not recovery or reform — just one of the “three Rs” of the New Deal.

“The question people always ask is, what would it take to break through that extreme partisanship?” Goodwin said. “It takes a crisis. This is what happens during wars.”

It’s a challenge at a scale the nation has not seen since 1932, when Roosevelt, a Democrat, defeated Republican President Herbert Hoover with a promise of better days ahead — a “new deal” for the “forgotten man.”

The political climate was fundamentally different then. Roosevelt had muscular Democratic majorities in Congress; politics today is highly polarized.

Allan Winkler, who testified before Congress about the New Deal during the height of the financial crisis in 2009, cautioned, “In our fragmented body politic, it would take an extraordinary politician to do what is necessary.”

Emanuel says the country needs investments in infrastructure to improve online connectivity so that learning, medicine and work can get through stay-at-home orders.

The case for a major rebuilding may become clear if dire forecasts of a second-quarter decline in annual economic output ranging from 30% to 50% come true.

“I think we are going to see an epic lockup in the mortgage markets as people are going to be unable to make their payments,” said Louis Hyman, a historian at Cornell University.

This same cascade of defaults existed in the Great Depression. The New Deal swung to the rescue with the Home Owners’ Loan Corporation to stop foreclosures, and the development of what would become 30-year mortgages.

Now, Hyman says, there’s a “painful truth”: The bulk of most people’s wealth is tied up in their homes — and inaccessible in a crisis. This means Americans will need new ways to build wealth.

Framing the divide between Republicans and Democrats is a simple choice: Is it better to establish a government firewall amid a downturn? Or should the tax code and regulations be re-engineered so businesses and citizens can adapt to pandemics?

Heather Boushey, president of the Washington Center for Equitable Growth, says allowing government aid to automatically increase as the economy falls would have been one of “our best defenses so that the coronavirus recession does not turn into a full-scale economic depression.”

More conservative economists believe adjustments to the tax code and regulations will improve growth and resilience.

“This is not one of those things where if you send checks you can jump-start the economy,” said Douglas Holtz-Eakin, a former Congressional Budget Office director and economic adviser to Republicans.

Price Fishback, an economist at the University of Arizona known for his work studying the Depression era, proposes another, more abstract notion as a key to fashioning another New Deal: humility.

New Deal programs that improved lives did not protect against later downturns. At the end of 2019, no major economist forecasting this year envisioned that a pandemic would throw the world into turmoil.

“Once we think we got it licked,” he says, “we get slammed in the face again.”