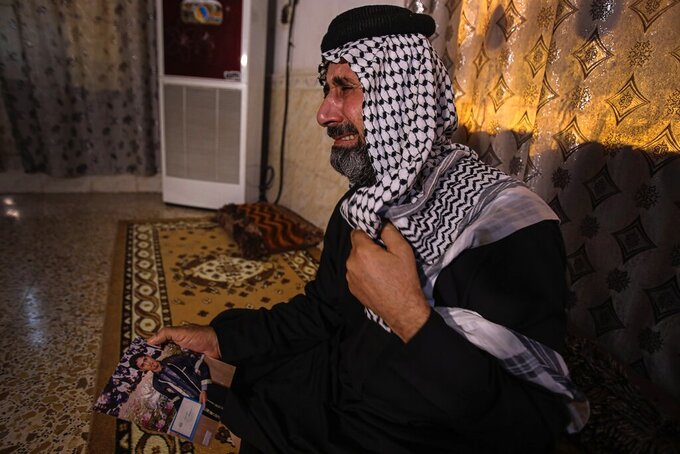 FILE - In this July 29, 2020 file photo, Jasb Hattab Aboud, father of the kidnapped protester Ali Jasb, cries as he holds his son's picture in his home un the town of Amara,Iraq. Aboud was shot to death Wednesday, March 10, 2021, a human rights monitor and security officials said. Jasb Hattab Aboud died of a gunshot wound to the head at 6 p.m. in the southern city of Amara, said Ali al-Bayati, a spokesman for the semi-official Independent Human Rights Commission and a security official. (AP Photo/Nabil al-Jurani)

BAGHDAD (AP) — The father of a missing Iraqi anti-government activist who waged a public campaign trying to bring to account a militia suspected of kidnapping him was shot to death Wednesday, a human rights monitor and security officials said.

Jasb Hattab Aboud died of a gunshot wound to the head at 6 p.m. in the southern city of Amara, said Ali al-Bayati, a spokesman for the semi-official Independent Human Rights Commission and a security official. Both cited preliminary investigations and said more details would be forthcoming. Authorities have not identified the culprit.

The security official spoke on condition of anonymity in line with regulations.

Aboud was uncommonly vocal in his search for his son Ali Jasb, a lawyer who was one of a number of activists who vanished at the height of Iraq's mass anti-government demonstrations in October 2019. Aboud publicly accused a powerful Iran-backed militia of kidnapping him and even took the dangerous step of seeking to take its leader to court.

Other families of missing activists were more reserved, often fearing reprisal if they spoke out.

Jasb, who has not been heard from since surveillance footage captured his abduction on Oct. 8 in Amara in the southern province of Missan, came to symbolize the campaign of terror waged by militias, widely believed to have abducted dozens of prominent activists and to have killed more than 60.

The protests were largely silenced by a combination of the coronavirus and a violent crackdown by security forces and militias that, according to the commission, killed more than 500 people.

Aboud was a determined figure who for a time was a fixture on local media, reminding the Iraqi public about his missing son and seeking justice. He routinely took the six-hours-long bus journey from his rural town to Baghdad to meet his lawyer. Always, he carried the documents that he believed would deliver justice in a court of law.

The Associated Press followed Aboud's attempts to push a criminal case against the powerful commander of Ansar Allah al-Awfia, one of the more extreme pro-Iranian militias. The militia was incorporated under the state-sponsored umbrella group, the Popular Mobilization Forces, created to fight the Islamic State group in 2014.

At every turn, the criminal case revealed the weakness of Iraq's judicial institutions visa vis the growing power of militia groups.

Initial proceedings in Missan's courts came to a standstill when testimony revealed a link between the abduction and the head of al-Awfia, local commander Haidar al-Gharawi. Frustrated by the delay, Aboud transferred the case to Baghdad where an investigative judged deemed there was insufficient evidence to push the case forward.