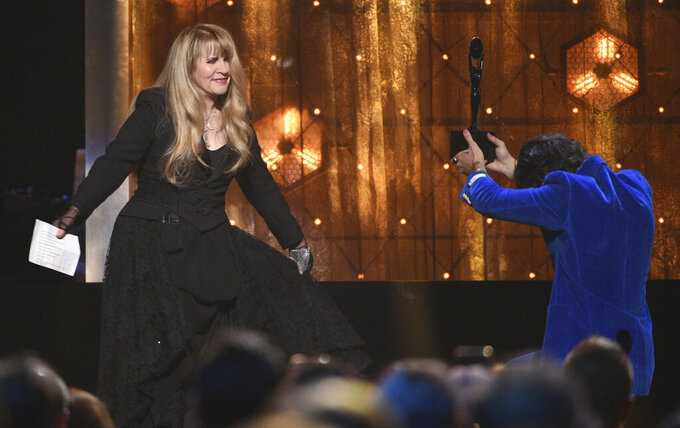 FILE - Harry Styles, right, presents a trophy to Stevie Nicks at the Rock & Roll Hall of Fame induction ceremony in New York on March 29, 2019. Nicks has become close friends when the former One Direction member since he invited her to perform at one of his concerts in 2017. Since then, they’re performed several times together and Styles even previewed his latest album, “Fine Line,” for her and some of her friends before it was released in December. (Photo by Evan Agostini/Invision/AP, File) 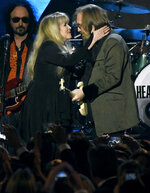 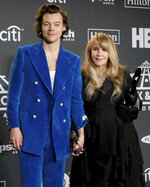 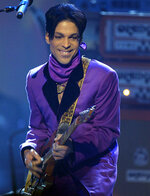 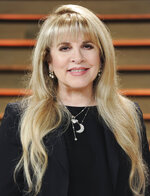 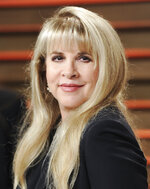 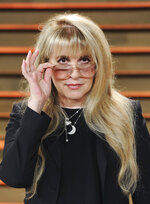 NEW YORK (AP) — Stevie Nicks — who is releasing a new song Friday and a concert film later this month — discusses the TV miniseries she’s working on as well as her relationships with Tom Petty, Prince, Beyoncé, Harry Styles and the members of Fleetwood Mac in outtakes from a recent 90-minute-plus interview with The Associated Press. Read the interview here.

When editing her concert film “Stevie Nicks 24 Karat Gold The Concert” — recorded over two nights during her 2016-17 tour — Nicks had a realization: “Tom was still alive when we did this, wasn’t he?”

“Honestly, as I was watching the show, for me, he was just alive again,” she continued. “I was like, ‘Oh my God, he didn’t die until after that.’”

Petty died in Oct. 2017. Just months before he passed, the pair got together at the British Summer Time at Hyde Park in London to perform their 1981 hit “Stop Draggin’ My Heart Around.”

Fleetwood Mac’s recent tours wrap up with a cover of Petty’s “Free Fallin’” and Nicks said that was always hard to perform.

“It was between Michael (Campbell) and I — it was incredibly difficult for us to even look at each other. I would stand up next to him at the very beginning when it was starting and if I even put my hand on Michael’s back, it was like both of us just started to wither,” she said.

The late icon Prince also has a presence in Nicks’ concert film. She dedicates her performance of “Moonlight” to the Purple One and his photo is above her as she sings the classic “Edge of Seventeen.”

Nicks even appeared in the video, and remembers meeting Kelly Rowland, Michelle Williams and Beyoncé — who was just 19 at the time.

“I got to sit there with them and hang out with them all day long. ...Then I did my guitar playing part, which was totally fun and so when I left there, I felt like I knew them. I never really saw them again. I don’t think I’ve ever seen Beyoncé since. We had a great day,” Nicks said.

“Bootylicious” not only topped the Billboard Hot 100 chart, it was so popular that the word was added to the dictionary thanks to the song’s success.

“Without all the makeup and everything, they just looked like three really cute, little teenage girls. Then of course, they’re just like me, they put on those — whatever it is that makes them — them. Whether it’s your boots or your jacket or whatever, then they became Destiny’s Child, and I saw it. It was really a marvel to see,” Nicks said. “I always feel like I know them, even though I really don’t. I feel like I know Beyoncé even though I really don’t know her at all. I feel like I know her because I was with them for a long time that day. They gave me a chance to pretend like I was playing guitar. I don’t think anybody ever gave me that chance ever again.”

Speaking of Beyoncé — who has a chance of matching Stevie Nicks by becoming a two-time member of the Rock and Roll Hall of Fame — Nicks says she’s sort of bummed she’s the only woman to achieve the feat.

Nicks was first inducted into the Rock Hall in 1998 as a member of Fleetwood Mac, and she made history when she became a member as a soloist last year. Twenty-two men have been inducted twice, including Michael Jackson, Paul Simon, Eric Clapton, Lou Reed and all four members of the Beatles.

Artists can become eligible for induction 25 years after the release of their first record. Beyoncé will qualify for induction as a member in Destiny’s Child in 2023 and as a soloist in 2028.

Nicks’ advice to women to wanting to be inducted twice: “If they’re in a band, well, just make a quickie solo album somewhere in there. You never know. That’s the only way you’ll ever get into the Rock and Roll Hall of Fame twice. Both careers have to exist for a really long time.”

One of her favorite moments during her second initiation last year? Harry Styles inducting her.

“I loved it and everything he said helped me with my speech, which went on way too long. Probably the longest acceptance speech ever at the Rock and Roll Hall of Fame,” she said.

Speaking of Harry Styles, Nicks has become close friends with the former One Direction member since he invited her to perform at one of his concerts in 2017.

Since, they’re performed several times together and Styles even previewed his latest album, “Fine Line,” for Nicks and some of her friends before it was released in December.

“He’s watching me to learn, just like I watched Jimi Hendrix to learn or I watched Janis Joplin or I watched Buffalo Springfield or I watched all the different bands that Lindsey and I opened for,” Nicks said of Styles.

Though they haven’t written or recorded together, Nicks admits “we will.”

Styles topped the Billboard Hot 100 chart this year with the sweet pop song “Watermelon Sugar” from his new album. But Nicks says she feels “so bad for him that this stupid pandemic had to happen right as ‘Fine Line’ was coming out.”

She gives Styles credit with warning her about the serious impact the pandemic would have on touring.

“This is before they locked us down, I said to him, ‘You know, it’s going to be a long time until we actually walk onstage again.’ ... In all of his 26-ness to a 72-year-old he said, ‘I don’t think that we’ll be back onstage until the end of 2021.’ This was February. I said, ‘Are you serious? Are you kidding? Really? That’s what you think?’ He goes, ‘That’s absolutely what I think.’”

“He became like this sage, man of wisdom, I was like, ‘Wow! I hope you’re wrong.’ But he’s absolutely right.”

Speaking of friends Stevie Nicks have been in touch with — don’t count the members of Fleetwood Mac.

“I haven’t talked to anybody in Fleetwood Mac. I haven’t even talked to Mick. I’m really, really good friends with Mick,” she said. “Not only did I not call them, but they didn’t call me either. It seems like everybody is very much existing in their own bubble. It’s like there are people that I really need to call that are important to me that I have not called.”

“Whenever I feel really guilty, then I say to myself, ‘Well they haven’t called you either.’ That’s your excuse out. Soon as somebody calls you, then you have to call them back,” Nicks continued. “It’s society of pandemic. We’re all going to be so excited when it’s over that we’re all going to be over-friendly and calling people all the time and people are going to be like, ‘Back off. Stop.’ I think that hopefully we’re all going to get through this and please God will show us the way and we’ll be OK.”

Speaking of the pandemic, Stevie Nicks may not be able to tour but she’s been working hard on a new TV miniseries.

The show is based off the Welsh goddess Rhiannon, which inspired Nicks to write the 1975 Fleetwood Mac hit of the same name. After learning more about Rhiannon, Nicks bought the rights from author Evangeline Walton’s adaptation of the ancient British Mabinogion, which includes the Rhiannon story.

“I was in meetings for that in January and February before this thing happened,” she said. “It’s one of the few kinds of work that actually can go on in a pandemic.”

“I think it’s creative for me to watch all that good TV because it is good and it’s fun. And it takes your mind off of everything that’s going on. We’re watching movies for ‘Rhiannon,’ we’re watching the old Excalibur movies and the King Arthur movies. All the medieval movies, even the really old ones. That’s really good too because that kind of keeps you in sort of that mindset also,” she said.

“We don’t seldom just sit around at night and talk, because there is nothing left to talk about. We’ve told every story that any of us have ever heard 50,000 times over the last 30 years. So, we’re done talking.”