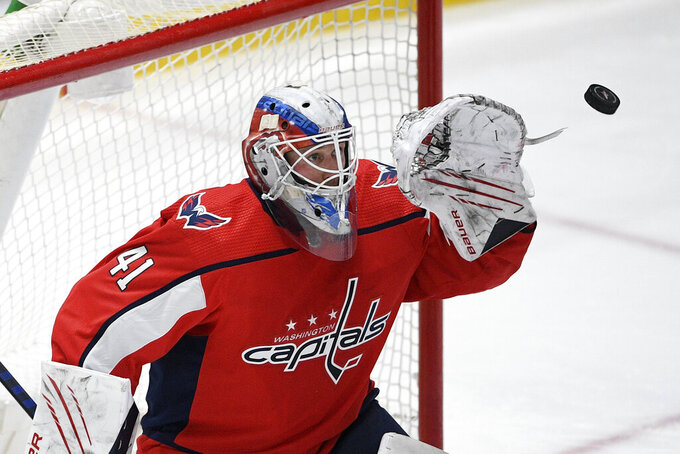 WASHINGTON (AP) — Evgeny Kuznetsov didn't skate for over two weeks while battling COVID-19, missed eight games total and needed time to feel like himself. Teammates Alex Ovechkin and Dmitry Orlov also missed a handful of games for violating NHL pandemic protocol and weren't the same when they returned.

Now more than a month since putting that in the rearview mirror, the three Russians are clicking and contributing and making the Washington Capitals difficult to handle.

All three scored in a 4-3 victory against the New Jersey Devils on Thursday night. Kuznetsov scored twice, Ovechkin kept his hot streak going with the 721st goal of his career, Orlov scored his third goal in nine games and Washington is 8-1 in its last nine games.

“After the pretty long break after COVID, (it) wasn’t (an) easy one to get back in hockey shape,” said Kuznetsov, who has three goals and six assists in the past eight games. “I hope that I’m going to continue to grow and I hope the team is going to play much better and know we can be successful.”

If this kind of production continues, they will be.

After falling out of first place in the East Division following a loss Saturday and four days off, the Capitals kept pace with old coach Barry Trotz's New York Islanders by responding with a goal in 2 minutes or less each time the Devils scored.

After Nick Merkley got New Jersey on the board when Capitals goaltender Vitek Vanecek gave away the puck steps from his own net, Orlov scored 1:47 later. When Miles Wood — a childhood Ovechkin fan — scored midway through the second, Ovechkin fired a one-timer past Mackenzie Blackwood for his team-leading 15th of the season.

Kuznetsov put the Capitals ahead later that period and back ahead in the third, scoring 62 seconds after Jesper Bratt tied it on the power play.

“The most important shifts in the game are at the start of a period and after a goal," Wood said. “I felt like we came out flat after we scored and it cost us a few times.”

The Devils and others in the East have learned their mistakes can prove costly against Washington, especially when Ovechkin and Kuznetsov are rolling like this. After getting punished for being unmasked together with Orlov and goalie Ilya Samsonov in a hotel room in January, it has taken time for the chemistry to come back.

“The hockey thing, it’s so funny: It’s so hard to find (your) game, and it’s so easy to lose that game,” Kuznetsov said. “I hope that we’re getting in the right direction where we’re understanding the system, we execute the plays that we want to make, how we want to play.”

The numbers say so. Kuznetsov's nine points in eight games come after he had six in his first 14. Ovechkin has scored eight in the past nine games after seven in his first 14. And Orlov's recent run followed an 18-game start with just one goal.

“It was really nice to see them all respond the way that they have,” coach Peter Laviolette said. “All those players definitely got derailed a little bit, as other players have across the league. It’s just the season that we're living in. Just coming out of it, they’re getting stronger and stronger.”

Ovechkin is now 10 goals shy of tying Marcel Dionne for fifth on the NHL career goals list, and Laviolette has been very impressed by Orlov's game. But Kuznetsov's is the biggest success story of all, after he figured out what his new coach wanted and delivered.

“I’ve been understanding the system (better) and back in shape after COVID,” Kuznetsov said.

Vanecek hesitated on where to go with the puck on the second shift of the game, and the result was one of the easiest goals of Merkley’s career. Vanecek rebounded to make 21 saves for his 14th victory.

Washington played without third-line center Lars Eller for the sixth time in seven games. He has missed the past five with a lower-body injury, and his status remains uncertain for upcoming games against the Devils and New York Rangers.

Eller's absence shifted T.J. Oshie into a multi-positional role, as he spent time at right wing and center. While not quite as difficult as players splitting time between forward and defense, it made things more challenging for Oshie, who hadn't played in the middle for several years until earlier this season.

New Jersey entered 4-1-1 in its past six games. Coach Lindy Ruff had been able to keep several lines together and liked the chemistry that was developing.

“We’ve got energy back in our game,” Ruff said.