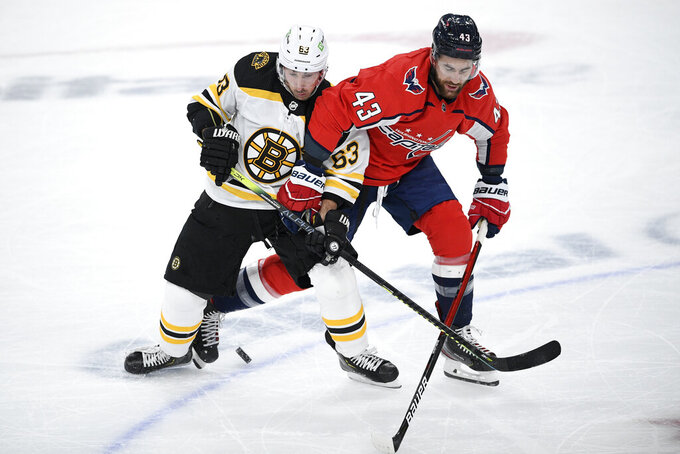 WASHINGTON (AP) — Alex Ovechkin didn't know how he would feel after not skating, let alone playing hockey, for the past 10 days while in quarantine.

Turned out to be pure jubilation.

In his first game since Jan. 19, Ovechkin scored in overtime to help the Washington Capitals beat the Boston Bruins 4-3 Saturday night in a showdown between the top teams in the NHL’s East Division.

After Ovechkin missed the previous four games because of COVID-19 protocols, the high-scoring forward showed his career-long flair for the dramatic by beating Tuukka Rask with a perfect shot 28 seconds into overtime.

“It was fun,” said Ovechkin, who also had an assist while being eased back in with 14 minutes of ice time. “It was kind of tough ... but we battled through it and we’ll take the win."

Ovechkin's goal salvaged two points for the Capitals, who blew a 3-0 lead by allowing goals to Nick Ritchie, Brad Marchand and then Charlie McAvoy with 57.3 seconds left in regulation. In the process, Washington's captain tied Hall of Famer Mike Gartner for seventh on the career goal-scoring list with his 708th.

Coach Peter Laviolette wanted to keep Ovechkin under 15 minutes because he hadn't been on the ice for so long, and he noticed the 35-year-old improve as the game went on.

Of course, Ovechkin didn’t do it alone. The Capitals remained unbeaten in regulation at 6-0-3 and extended their franchise-best point streak to start a season to nine games on the back of some of the players who excelled in Ovechkin's absence.

Rookie Vitek Vanecek made 40 saves, including one spectacular diving stop in a first period heavily tilted toward Boston, in his sixth consecutive start. Ovechkin's longtime running mate, Nicklas Backstrom, scored his fifth goal of the season, while Washington continued to get contributions down the lineup: defenseman Trevor van Riemsdyk's first goal since joining the team, and Richard Panik's first of the season on the power play.

Former Bruins captain Zdeno Chara played almost 21 minutes in his first game against his old team, which didn't see him as a full-time player at age 43. Chara — who doesn't wear a visor — took a puck to the face late in the first period but returned for the second and didn't miss a shift.

Boston outshot Washington 43-23 despite playing without injured wingers Jake DeBrusk and Ondrej Kase and defenseman Matt Grzelcyk. Coach Bruce Cassidy believed the Bruins were the better team for most of the night.

“We made a few mistakes,” Cassidy said. “At the end of the day we battled back, so I’m looking at it as a positive.”

David Pastrnak, who tied Ovechkin for the most goals in the league last season, made his season debut following offseason surgery to repair a torn labrum in his right hip.

Rask allowed three goals on the first 12 shots he faced and finished with 19 saves. The Capitals beat the Bruins for the 17th time in 19 regular-season games dating to 2015.

“We shouldn’t have lost this game,” Marchand said. “We had a lot of opportunities. We easily could have won that game.”

This was the first time Chara had faced the Bruins since April 11, 2006, as a member of the Ottawa Senators. The 2011 Stanley Cup-winning captain is still revered by his former teammates, especially those who played with him the past 14 years.

“It starts with his drive and competitiveness,” new Boston captain Patrice Bergeron said. "He never takes a shift off or a practice off, really. That’s why he’s been around for so long and he’s been so successful."

Ovechkin only missed four or more games in a season twice in his first 15 years in the NHL. He missed these four because he joined his three fellow Russian teammates unmasked in a hotel room, which is a violation of the league's pandemic protocols.

“It is a situation when rules are rules, right?" Ovechkin said. "It sucks, obviously. No one wants to be suspended; no one wants to put yourself in that position. But you know it’s over, so you learn from it and move forward.”

While Ovechkin and defenseman Dmitry Orlov were removed from the NHL's COVID-19 protocol list Saturday, center Evgeny Kuznetsov and goaltender Ilya Samsonov remained on it. Orlov skated with the team but missed a fifth consecutive game.

Laviolette did not have an update on when Kuznetsov or Samsonov might be cleared to skate or play.

The teams face off again Monday night for the second of eight meetings this season.