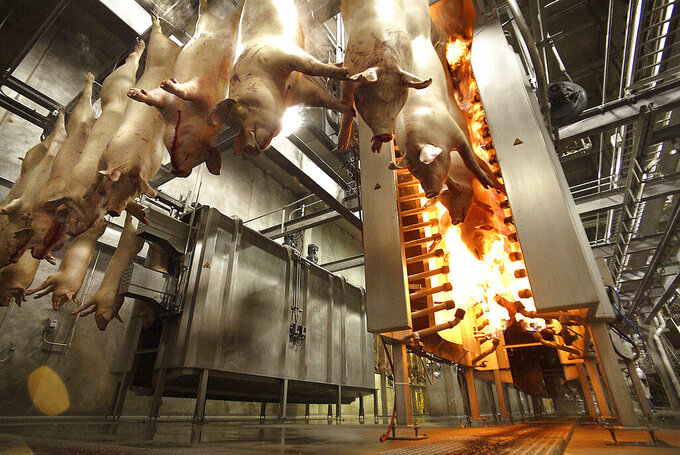 FILE - In this Feb. 16, 2006, file photo, hog carcasses are moved through a series of flame units to burn off hair as they are processed at the Triumph Foods plant in St. Joseph Mo. The city of St. Joseph announced Wednesday, May, 7, 2020, that an employee at a pork plant where hundreds of workers have tested positive for COVID-19 has died of the disease caused by the coronavirus. The man, who had underlying health conditions, worked at Triumph Foods, a city spokeswoman said. (Kevin E. Schmidt/Quad City Times via AP, File)

A total of 495,392 people have filed unemployment claims since the week that ended March 21, when local governments began instituting stay-at-home orders in response to the spread of the coronavirus.

The Missouri Department of Labor and Industrial Relations said Thursday 52,203 people filed initial jobless claims last week, down from 54,710 the previous week. The numbers began to decline after 101,722 people filed claims the week that ended April 11.

Of the applications filed last week, 47,439 reported their claims were related to COVID-19, the labor department said.

The unemployment figures are for the week before Gov. Mike Parson's statewide stay-at-home order expired Monday. On Thursday, Parson visited businesses to see how they were adapting to the first phase of the reopening.

He said was pleased to see customers and businesses generally following safety guidelines and using common sense to keep everyone safe.

“As you see, people are starting to go back and engage in the economy,” he said. “I was glad to see that. I was glad to be out to kind of show support for the businesses and make sure people know it's OK.”

Missouri’s health department on Thursday reported 9,341 confirmed cases of the coronavirus, which was 239 more than on Wednesday. Missouri deaths attributed to the virus rose by 22, to 418.

Also Thursday, the U.S. Department of Health and Human Services announced that 29 health centers in Missouri would receive a total of $11.9 million to expand COVID-19 testing in the state.

Parson said he has not been tested for the virus because he has felt healthy and believes other people need testing more than he does.

The governor and Christine Smith, vice president of Pfizer BioTherapeutics Pharmaceutical Sciences in Chesterfield, said the company is one of three Pfizer locations in the U.S selected as an initial manufacturing center for an eventual vaccine.

Pfizer and a partner, BioEnTech, began a human testing trial for the COVID-19 program this week, as part of a global trial, Smith said. If the trials are a success and regulatory approval is received, Pfizer has the capacity to supply millions of vaccine doses by the end of 2020 and hundreds of millions of doses by 2021, she said.

The city of St. Joseph announced Wednesday that an employee at the city's Triumph Foods meatpacking plant died from COVID-19. The man, who had underlying health conditions, died at his home, the city said.

The Missouri Department of Health and Senior Services tested all asymptomatic workers at the plant from April 27 to May 1 and found that 412 of 2,367 workers tested positive despite showing no symptoms. The plant remains open.

For most people, the coronavirus causes mild or moderate symptoms that clear up after two to three weeks. For some, especially older adults and people with existing health problems, it can cause more severe illness, including pneumonia.