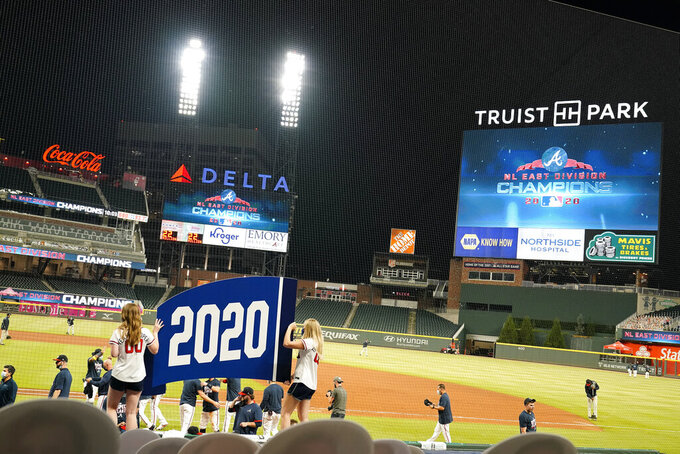 The Atlanta Braves celebrate after a baseball game to clinch the NL East title against the Miami Marlins on Tuesday, Sept. 22, 2020, in Atlanta. (AP Photo/Brynn Anderson) 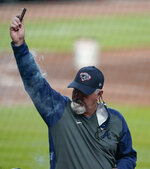 ATLANTA (AP) — After clinching their third straight NL East title, the Atlanta Braves set their sights on ended a much longer streak.

After losses in 10 straight postseason appearances, the Braves are desperate to end the drought.

“If you ask me, it’s World Series or nothing,” said Ronald Acuña Jr. said through a translator after Atlanta clinched the division title by beating the Miami Marlins 11-1 on Tuesday night.

“I think when it’s all said and done, this is the most satisfying with all we had to go through this season to get to this point,” said Freeman, who missed the start of the delayed season with a high fever and other symptoms after testing positive for the novel coronavirus.

Freeman rebounded to become an MVP candidate. He pushed his batting average to .347.

After Jorge Alfaro's game-ending lineout to Freeman, Braves players hugged on the field and exchanged high-fives in the dugout. Players wore “Respect Atlanta” T-shirts and posed for photos on the field with the 2020 banner.

“They’ve been probably the class of the division over the last few years,” Mattingly said. "They’re the gold standard. They’re the guys you have to go after.”

Wilson (1-0) allowed three hits and one walk, striking out a career-high seven.

Atlanta clinched its record 20th division title, one more than the New York Yankees. The Braves won 14 straight in completed seasons from 1991-2005 but have not won a postseason series since 2001 and have not won a championship since 1995.

“Everyone has got the taste the last couple of years and we’ve had a lot of heartbreak, especially last year,” Freeman said. “We’ve been grinding this year and we’re going to grind again.”

Miami remained in position to earn its first playoff berth since winning the 2003 World Series.

“We’ve got to keep focused and keep our heads up all the time,” said José Ureña, (0-3), who allowed four runs in six innings.

Ozuna hit a first-inning homer, Ozzie Albies homered in the second, and Ozuna added a two-run double in the fifth and drove in Freeman with a 450-foot homer to center field in the eighth.

Starling Marte led off the sixth with a homer off Josh Tomlin.

Marlins: INF Sean Rodriguez, who was designated for assignment on Sunday, has cleared waivers and reported to the alternate training site in Jupiter.

Braves: Wilson is the 13th starting pitcher for Atlanta this season. He was recalled on Monday when LHP Cole Hamels was shut down with left shoulder fatigue after making only one start.

Manager Brian Snitker said the Braves were prepared for a low-key celebration, due to social distancing rules in the pandemic. He said Major League Baseball “pretty much restricted all that” due to space constraints in the clubhouse.

“I think we go in and air high-five to everybody,” Snitker said.

It was an unexpected showing by Wilson, the 22-year-old right-hander. He had a 7.04 ERA in four relief outings and had been at the team’s alternate training site until Monday. He had not started since July 16 last year at Milwaukee.

“Bryse was awesome,” Snitker said. "That was a big start for Bryse. He hadn’t pitched in a while.”

Marlins: RHP Sixto Sánchez will look for his second win over the Braves in about two weeks on Wednesday night. He allowed only three hits in six innings in an 8-0 win at Atlanta on Sept. 8.