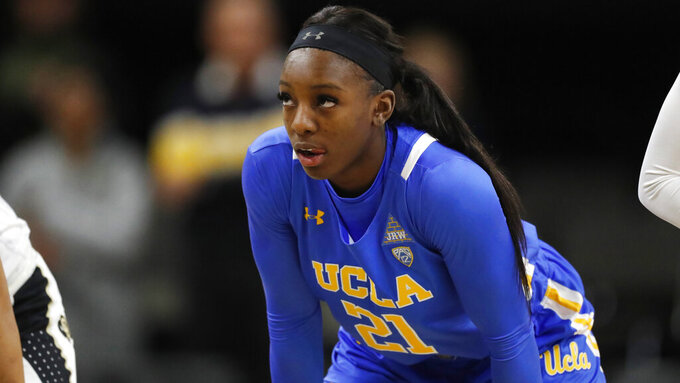 Stanford is receiving plenty of attention during the preseason with Tara VanDerveer on the verge of passing the late Pat Summitt as the winningest coach in women's basketball. But the Cardinal are also hoping the spotlight will be on them at the end of the season.

The Cardinal return nine players and were picked by league coaches and media to win the Pac-12 Conference regular-season crown for the first time in seven seasons. They are also ranked second in The Associated Press Top 25, their highest preseason ranking in 11 years.

VanDerveer needs five wins to surpass Summitt's mark of 1,098 wins. Providing no games are canceled, that could occur in mid-December.

“I know she has four or five wins until she gets the record, but I know she has bigger goals than that,” said guard Kiana Williams, who led the team in scoring last season, averaging 15.0 points per game.

Stanford isn’t the only one generating headlines in what may be the deepest conference in the country. Four other Pac-12 teams are also ranked — No. 7 Arizona, No. 9 UCLA, No. 10 Oregon and No. 18 Oregon State.

Things could be even more competitive this season with a 22-game, double round-robin conference schedule. In past seasons, teams played 18 conference games, meaning some contenders faced each other only once.

The move this year was due to COVID-19 concerns and leaves teams with only three nonconference games.

“Everyone’s middle name is flexible, We just have to do whatever we’re allowed to do and enjoy each day," VanDerveer said.

Oregon coach Kelly Graves has advocated making the move permanent because it means there would be a true conference champion.

The Wildcats would have made the NCAA Tournament for the first time since 2005 until the pandemic cut last season short. They are led by senior Aari McDonald, who was named to the preseason AP All-America team after leading the conference in scoring (20.5 points per game) along with 7.8 rebounds.

Coach Adia Barnes said McDonald carried the team on her back the past couple of seasons but that she has evolved as a leader and now has a strong supporting cast.

Forwards Cate Reese and Sam Thomas were named to the preseason all-conference squad. Reese, a junior, averaged 13.6 points and 7.5 rebounds last season while posting six double-doubles. Thomas, a senior, was the only player in the conference to record more than 40 blocks and steals.

“Watching Aari and the way she pushes the ball, we're going to play fast but we’re going to demand a lot defensively to help create points from our defense,” Barnes said.

Oregon has won the regular-season title the past three seasons but graduated four starters, including record-setting guard Sabrina Ionescu.

Erin Boley is the lone returning starter but Graves has brought in the nation's top freshman class and has eight players 6-foot-2 or taller. Forward Sedona Price will also make her college debut after sitting out last season following her transfer from Texas.

“It's going to be a new team with a new identity. We knew that coming in. I think we have a great combination but even though it is a big shift we are going to be coming back strong,” said Boley, who averaged 9.2 points last season.

UCLA has made four straight Sweet 16 appearances, but the Bruins have depth issues as freshman forward Izzy Anstey and guard Gemma Potter — both from Australia — have not been allowed into the country due to coronavirus-related restrictions on first-year international students.

Coach Cori Close said both players have filed a lawsuit and are hoping for a decision within a couple of weeks. It doesn't help in the interim as Close said she is down to eight players practicing.

Oregon State was picked to finish fifth in the conference but that might be fortuitous. The last time that happened (2016-17), the Beavers won the conference's regular-season title.

Southern California couldn't practice for two weeks after the team was quarantined when a player tested positive. The Trojans resumed Wednesday, but have only a week to prepare for their opener.

“How that’s going to translate into the first game? I don’t know,” coach Mark Trakh said. “We might just roll the ball out and see what happens. We just have to be ready to change on a dime and be positive.”